Today was a story of two catastrophes barely averted.

As we were pumping up our tires in the parking lot I noticed a bald patch about 1.5" long all the way down to the casing on my rear tubular. Crap! I recall having to lock it up avoiding the crash in stage one and that must have caused it. I'm very grateful it held up for the criterium last night but since Alex T kindly offered to me use his rear Zipp 404 (with an 11-28 instead of my 12-27) I chose safety and left my rear wheel in the van.

As we were spinning up the road Greg shifted into spokes and it was tense for a bit as the chain was really jammed in there. Luckily when we got it out no spokes were damaged. Good save Greg.

The weather report said it would warm up but the opposite happened. Luckily I had on enough to avoid freezing.

The Cat 1-2 pack started 10 minutes ahead of us and I watched with more than a little consternation as some guy lit it up from the gun and freaking sprinted up the road absolutely lining out the pack. This race is ALL hills and I sure did not want to start that way... Thankfully sanity prevailed and our first climb was quite sane. That's not to say it was easy, I was already struggling a bit and this did nothing to boost my confidence.

I survived the two short loops with the bunch. And by 'survived' I mean I had to chase on twice. Rats. As we headed out onto the long loop I got to witness greatness. And yes, it is my tendency to exaggerate but hey, it makes this blogging more fun. Anyway, as we approached the steepest climb of the long loop Dave Z pulled into it – hard – and then proceeded to simply go faster thus ride away from most of the field. He didn't so much attack as he just accelerated until everyone was shelled. Karsten H put in another great ride to hang with and get second on the stage. Damn.

As we hit the first hill and the pace ramped up just a bit Greg K turned to me and said something like, "I'm outa here." Honestly, I felt pretty much the same. When Dave Z made his first probing acceleration Dave H tried to go with but over-extended himself and then self-destructed. I could tell right away it was not anything I could follow so kept it sane and ended up riding away form Greg and then catching and passing Dave H. Based on my climbing so far this year I never thought that would happen so without disparaging either of them I was kinda psyched. As psyched as you can be while getting dropped anyway. Brad K on the other hand was posting another strong showing and hung with this first spurt.

Once I was really and truly off the back the front group seemed to slow just a bit! Argh... nothing like making it appear possible that you can get back on so I took the bait, dug deep and finally hitched back up at the bottom of the big descent prior to the first gravel climb. But of course that took a lot out of me and as soon as the road tipped up I was dangling once again.

At the top of the gravel climb I was only about 100' behind the leaders! Everyone had told me that the descent was sketchy and twisty so I was thinking no problem – I'll catch them for sure. What I did not realize was that there was also a wicked headwind all the way down and so the bunch easily went much faster than I could on my own. Rats. At the bottom of this hill I saw Dave Z's acceleration as he shed most of this lead group.

For the next long loop I was solo! 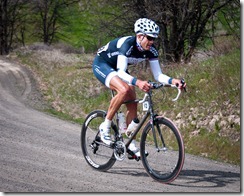 I kept looking back and saw that there was a group of about five riders behind me and I vacillated between going harder and sitting up. Eventually I opted for putting my head down and riding it in as waiting for others can sometimes spell disaster if they were sandbagging and then drop you before the finish. So I started looking ahead. And picking off dropped riders.

I think I caught and dropped at least three. I thought I was going to catch more but it turns out there were some recreational riders on these roads as well and when I got close it was a bit of a letdown to realize they were not racing... There was one carrot way up the road that kept me going. I think I chased this guy (Dave – a friend of a friend it turns out) for at least 15 miles and when I finally did catch him we were super compatible so lucky me. He was perhaps a tad stronger on the flats but I was just a hair fresher on the climbs (?!) and was faster on the descents. Luckily it did not matter as we quickly resolved to stick it out together.

ASIDE – I was very surprised to pass Todd G on the big loop, he was pulled over putting on clothes. Turns out he bonked hard and simply turned around and quit after getting dropped from the lead group.

On our last lap Dave and I also passed several dropped riders from the Cat 1/2 race; and they had one more lap to go!

On the last hill to the finish I was not going to sprint but then Dave turns to me and said, "Well, I wonder what I have left." Of course I interpreted that as meaning he was going to try and sprint and just wanted to give me fair warning after our miles of collusion so I ramped it up and managed to put a couple of seconds into him. In hindsight it could also have meant that he simply was wondering if he was going to cramp up or not but he was very grateful after the finish so hopefully no political harm was done.

I looped back around and hooked up with Brad and we cheered first Greg and then Dave up the hill. Greg had to drag race some guy and lost and Dave made it look absolutely brutal by practically riding his big ring all the way to the top. Can you say 39x15? Not sure what gear he was in but it looked super uncomfortable and super unnecessary.

The Kauper clan was also on the hill cheering – it was really cool.

By the time we all finished we were quite cold and it was time to head back to the car pronto.

Thanks to Alex for being so generous with his gear and congratulations to Brad for another great ride and to Greg and Dave for sticking it out. If Brad's confidence had been higher he might have gone even better.

This course is hard for sure but not as supremely brutal as people hyped it up to be. Sure, I got dropped but that isn't anything new. :) The 'wall' everyone warned me about was not so terrifying and the gravel was quite deluxe actually – extremely smooth. Of course that means next year will be another story entirely. No worries there.