Pre dawn patrol on Cougar Mountain with Bryan Estes today, everything was fabulous except I fell down. Crap. 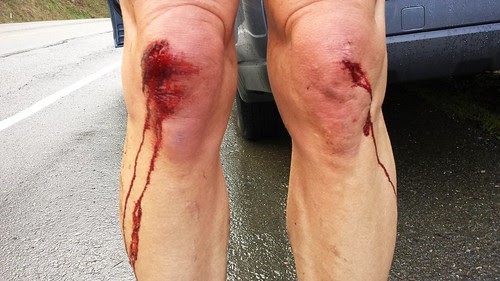 My legs felt good, my lungs felt good, my ankle felt good, my knee felt good and then boom. I was in the ditch. I stubbed my toe on a rock when it wasn't even dark anymore and unfortunately the first thing to hit the (rocky) ground was my right knee. Man did that hurt... for a minute all I could do was just sat on the ground. And swear. After I got up I had to walk for several minutes before I could jog again. Luckily there was no pain after about one mile of running. Whew! It hurt so much at first that my stomach felt upset.

Falling has no allure to me any more, I got my fill from years of bicycle racing. This is my second(?) fall this year and the worst injury so far. I'm ready to be done with it.

On the up side running with Bryan is awesome. We both work in and with technology and so most outings include rants about various technologies, users; traditional IT stuff. Good times for me in other words. We also saw two dear right at the start and they were SO not afraid. Pretty cool (and somewhat scary) to see pairs of glowing eyes in the pitch black. One was on each side of the trail just 10' from us and they were so mellow as we ran by. We also saw two ducks mating in a pond. At least I hope they were mating... otherwise it was a huge, silent fight.

I slept like crap last night but my body felt fine. I'll take it.

I broke out the Brooks PureGrit shoes today and they felt great! I think I like that close to the ground feeling a lot. And on the trails I ran today the cushion was ample.

I have no idea why my GPS spazzed today... I wish technology would just work.