What a great day! The sun was out, it wasn't windy and there was plenty of snow in the mountains and none in the city.

So logically Shelley and I had to play in the snow and then I had to go for a ride. Done. 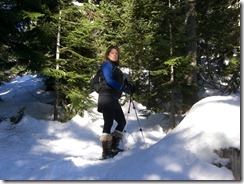 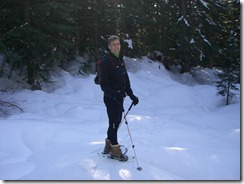 We didn't get to the trailhead until almost 9:30 but I guess it's early enough in the season that the masses have not yet started showing up and parking was not a problem. Good times.

Today was just a short walk but there will be more.

After a quick snack I headed out on my Single Speed Bike. Having not ridden much lately and wanting to accelerate my ramp-up I figured this was the ticket.

Wow was I tired… or weak or something. I was crawling up all the hills but I resolved to stay seated for all of them and did do that even coming up Madrona and Union on the way home. Whew. On the upside I got a little better as I rode and whereas I had trouble maintaining 18 mph on the way out I held onto 20+ mph riding north on Rainier.

While taking a nature break at Coulon Park some other guy was washing his hands when a third guy walks in talking loudly on his cell phone. He glances around and then asks, "Is this the men's restroom?"

While on Lake WA Blvd it started to get a little darker and that was fun. I saw a bunch of kids with wheelbarrows setting out candles along the lake. Kinda like when they do that at Green Lake. Shelley and I will be there for sure.