Another Wednesday, another 2 x 20 session on the indoor trainer. 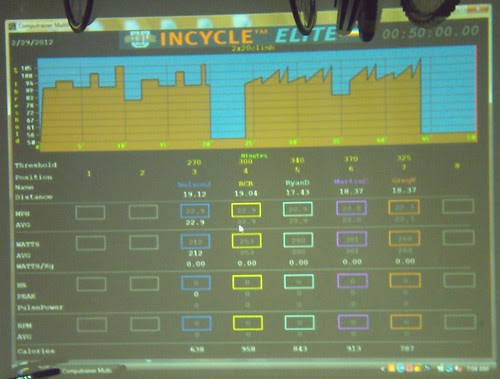 The last couple of days have felt like utter crap. And prior to that, this entire last week has not felt 'good'. My attitude has been at an all-time low so even though I came off of two rest days today I was not looking forward to this workout.

Teammates and Cycle University to the rescue.

Wow, what a difference good company and a great facility can make. I set my bike up between Ryan D and Greg K and to my left were Nelson J and RC R as well. Super crew. Since I had started this workout at a threshold setting of 360 watts last week I was loath to do anything less… especially after two easy days. For just a bit I contemplated 350 but then when the big, "3… 2… 1…" came on the screen I dialed it up to 360.

Half way into the first interval I was breathing hard! On the upside my legs were not falling off and I was able to keep my cadence where I wanted. During the 4-minute break I contemplated turning up my resistance but I was not sure when to do it. I was pretty sure I could not sustain a threshold setting of 370 for the entire second interval so I waited for the 80% 'break' that comes 10 minutes in and then cranked it up.

And I held it until the end! Yes.

Damn, those last five minutes I was just staring at the screen trying to will the seconds to tick by quicker. When the workout was over I had to slump over the bars and quit pedaling for a few seconds, that was as hard as I was able to go on this day.

Dos that mean I am wicked fast/strong? I doubt it. It just means I can keep slowly improving on this specific trainer workout where I know what is coming (so I can meter my effort) after two rest days. I have ridden precious little lately as I try to squeeze in these last couple of trail running races I want to do and feel like every time I get out on the road I don't have any fitness to speak of. Whatever, my last running race is in 2.5 weeks and then it will finally be all about the bike.

Here is my PowerTap data.

At lunch I managed to slip down to the IMA and got in a reasonable core workout. All that means is it felt reasonable, I pretty much do the same thing every time I work my core.