Three weeks ago I entered the second event in this three-race series and it was pretty fun so I thought I would come back and try the last one. This time it was quite a bit wetter than last time. 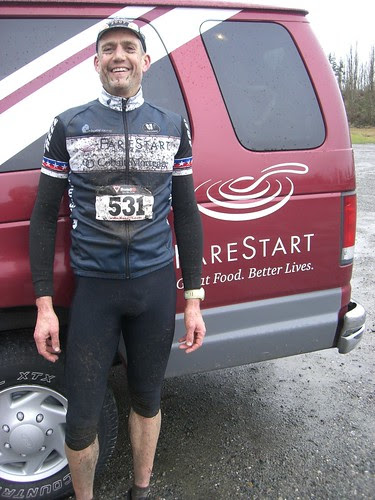 The weather kept some of the competitors away but it was obvious that all the fast guys who were in the hunt for the series win were still here. Go!

Right away I could tell that my run was not quite as quick as last time. The leaders pulled away pretty fast and all I could do was watch them recede into the distance. But this run had a substantial hill in it and I was able to pass about three people back on the climb. I pulled into the transition in 17th place.

It took me a looong time to change my shoes. Rats. At last two people passed me back in the transition. Once I got on my bike it was a different story; I felt pretty good and was really drilling it on the flats and was going up the hills in bigger gears than last time, I could tell because we rode many of the same trails today. Even though I was very cautious on the corners, the only thing holding me up today on the ride was traffic.

There was this one woman in front of me on the second lap and as I approached I shouted that I was coming up and she was like, "Okay…" But she didn't move. Then I said, "Passing on your left!" and again she said okay and didn't move. I saw an opportune corner coming up so I shouted, "Let me by on the right at the next corner please!" She said okay and then stuck right to the middle of the trail all the way through the turn. What the hell? I was getting a bit perturbed but wasn't going to shoulder her into the ravine or anything so this time I shouted, "Please let me by! You might need to stop or get off the trail!" This time she sorta kinda moved over to the left but I still had some significant contact as I rode past. Sheesh. For the most part everyone was VERY accommodating and some people even jumped off their bikes and pulled them off the trail - not necessary but very nice.

All the mountain bikes were putting seconds into me on the descents but I would more than make up for it on the flats and the climbs. Today I was able to really drill it on the flats and it felt good. I like that. I also started trusting the burms on the outside of corners and riding straight through puddles when it was the shortest line and passed plenty of people that way. Plus, off on the side of the trail the surface was frequently softer than in the middle so even though there was more water in the middle it felt faster to be on firm ground.

The first climb was straight up a section of grassy hill and it was just rideable. Each time my back tire was squirming all over the place as I churned away in my lowest gear. There was no way you could get out of the saddle so the proper gear and traction was key.

After some very bumpy flatish trail came the second climb. This was pretty steep and I had to run it every lap but I don't think that slowed me down any.

Then you came all the way back toward the start on a side hill and even rode under an arch that I had to duck (a lot!) for. That was the new bit and then we hit a gradual climb that was the course from last time.

At the bottom of the last descent were some people with RC boats by the 'lake' and these things were hauling ass! They were gas-powered and I saw some of them get launched and they took off like rockets. It was all hydrofoils and cigarette racing boats. The boats were about four feet long.

On the last flat section of the last lap I managed to pass one more person and tried to gun it to the finish so I would have a buffer because I knew that if he was this far ahead of me he obviously had a stellar run.

But my second transition was even longer than my first! :( Out of the corner of my eye I saw this guy pull in, seemingly change his shoes by magic and boom, he was off. I think he put 30 seconds on easy and I had almost that much on him going into the transition. At the end of the race he came up to me and gave me a tip, "Put toggles on your laces. That's how I made up so much time on you." Thanks Bro. Then he proceeded to compliment me on my bike leg. "You did really well for riding that cycle touring bike…" Thanks again.

As I headed out I could see him just ahead of me but there was no closing this gap. In fact, he put at least another 30 seconds into me on the last run leg and there was nothing I could do about it. On the hill I tried to go hard and kinda blew a gasket… At the top I had to stop for three seconds and catch my breath before I could run the descent. And then on the descent I was not really racing, more like resting.

Near the end I saw one guy chasing me down so I sped up and managed to finish strong. Whew.

I had put a clear rain jacket in the transition because of the wind but opted to not put it on for the bike leg and I was fine. And by the time I put my running shoes back on my gloves were soaking wet so after three seconds of fumbling with them I just left them behind and luckily my hands were plenty warm on that last run.

When I finished I was muddy! At the last minute I put a seatpost fender on and I'm so glad I did. Still, my shoes (both pair!) were a disaster as were my socks and my chest and face. I did a pretty good job of avoiding the spray from other riders as I did not spend a lot of time behind anyone but there was no stopping the mud from my own front wheel.

So my result was better but some of the competition from last time was not there. My average run speed was also slower but that hill takes the credit for that. My ride was faster but the bike course was also a little shorter (or so I was told?). All-in-all a really fun time.

It seems all the winners in these duathlons are wicked fast runners. I'll never be that. It was tough to decide what to wear today. It felt COLD but once I finished the first run I was fine and the ride was fairly sheltered. There was one long straight section on the run where you were battling a massive headwind. I don't recall that last time. Unfortunately there was no tailwind section. :) Once again it looks like my GPS shortened the course. Oh well.