Wednesday morning at Cycle University has become my weekly highlight. And by 'highlight' I of course mean it's the day I peak for. :( Obviously it's time to start racing bikes on the weekends. Another sign that I need to do a real event on the weekends is I was thinking about this trainer session 24 hours in advance because I wanted to do well. Sheesh. 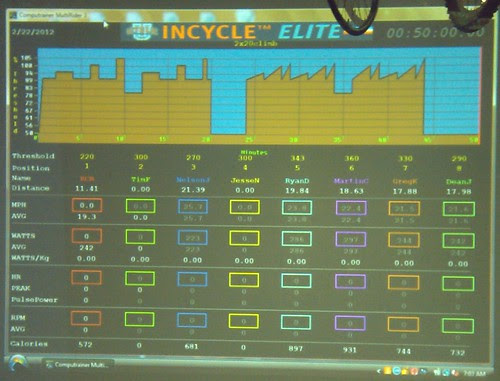 The alarm woke me up today and I felt pretty (sleepy) tired. Knowing I needed at least some food I stumbled down to the kitchen which has the benefit of getting me halfway to the garage where my bike is.

I made an effort to show up a little early today in hopes of getting in some warm-up minutes on the trainer otherwise the start of these workouts just kick my ass. Lucky for me Ryan D pulled up at about 5:50 so I was able to spin for roughly 10 minutes. Thanks Ryan.

Last week I started this workout at a threshold power setting of 340 watts and turned it up twice ultimately finishing at 360. As I was warming up today I dialed in 350 watts for my threshold setting but then just before we started I impulsively turned it up another 10 watts. Just because. I guess I wanted to see what I could sustain for the entire workout and not discover I could have done more during the first interval and so turn it up during the second.

I could tell it was harder.

I was already breathing pretty good by the time I hit that 2-minute 80% 'rest' in the middle of the first interval and those last two bumps were not easy. During the 4-minute 50% break I caught my breath, had a drink, steeled myself and then it was time for interval number two.

I shifted up one tooth for this one in hopes that a slightly slower cadence would make it easier for me keep my speed up. I had noticed that my speed was hovering around 21-22 mph during the first interval and I try to keep it between 21-25 and so wanted to get myself back to the upper end of that range.

ASIDE - in case I have not mentioned it before (I probably have…), when you drop below 20 mph on a CompuTrainer ergometer workout the resistance gets artificially hard and when you go above 25 mph it gets artificially easy. I sometimes see people killing it in the 53x12 doing 30+ mph and I just want to let them know that this is not the point of an ergo workout. Whatever.

A quarter of the way through the second interval I was already talking to myself in my head. "C'mon Martin!" I would say to myself, "You can do this!" Did I mention I was already looking forward to that 80% rest…? You betcha.

During the second part of the second interval I really had to concentrate. And at some point the words in my head started to come out of my mouth. Funny how we all do different things to encourage ourselves and I guess I literally cheer myself on. :) My speed dipped just a little a couple of times and I had to force myself to keep going and not take one of my lame little coasting breaks but in the end I did it. Boy where those last three nine minutes hard.

Whew, that was as hard as I can go. Never once did I even contemplate turning up my threshold power. At the end I had to do the old hang-the-head-over-the-handlebars routine for a minute before I could even cool down. For me this is another trainer PR/benchmark and honestly I'm not sure if I can go any better with the training (or lack thereof) that I am currently doing? And every time I think this is pretty solid I remind myself that doing two 20-minute intervals is NOT like any bike race where everyone else and the terrain dictates the pace. Plus, I'm not actually riding that much… Blah, blah, blah, right? See you on the road. Better yet, see you at the next duathlon, there I might stand a chance.

It sure helped 1) that I had rested yesterday and 2) that I setup between Ryan and Greg K both of which are very encouraging. During the ride Greg recognized that I was going for it and said something motivating and after we were done Ryan did the same. It helps!

And here is my PowerTap data.

At lunch I managed to get down to the IMA and had a great core workout! Nice. Sometimes after a hard workout in the AM I totally lose it and just want to go have a beer at lunch and call it a day.

ANOTHER ASIDE - in my experience nothing calls a stop to (the productive part of) your day faster than the beer with lunch. It always sounds like a great idea but then I just want to roll over, grab the remote and have another.