Boom! Another record setting day for Martin. And by 'record' I of course mean I managed to set my threshold power about 5-10 watts higher than normal which is still a pretty mediocre number compared to any major player. In other words, this hype is just about making me feel special. :)

After an easy day yesterday I obviously showed up at Cycle University pretty fresh and ready to go. Today it was just the skeleton crew of Corrie M, Tony B and Ryan D but hey, it's a FAR cry from doing a solo trainer workout so I was thrilled to be here. 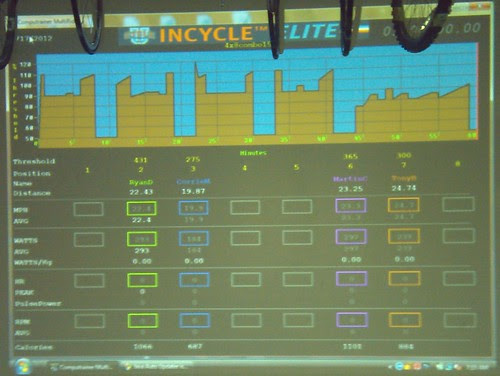 That first interval in this workout is always hard but today it was not quite the massive slap in the face that it usually is; I think I was able to spin for a solid 10 minutes before we got rolling and I'm sure that helped. The second interval was okay but then I was breathing pretty good during the third. I got it back under control during the fourth but had to focus to finish this up without fading; I was still breathing hard. In the end it was hard for sure but I actually had a little bit left in the tank so under ideal conditions I could do just a little more. Focus is the hardest thing for me… when I lose it my workouts suck and when I can maintain they are pretty good.

And here is my PowerTap data. No surprises here, you can see that after the last 8-minute interval I finally sat up for a couple of seconds to coast so my speed drops off once but that was the only time. My max heart rate is still not so high but my power numbers keep slowly climbing. I think I did shift up one cog after the first interval and my cadence chart seems to corroborate that.