Ouch… two hard workouts followed by a late night does not equal feeling fresh. Not sure if today qualifies as a moderately good workout or junk miles? That distinction is frequently lost on  me. 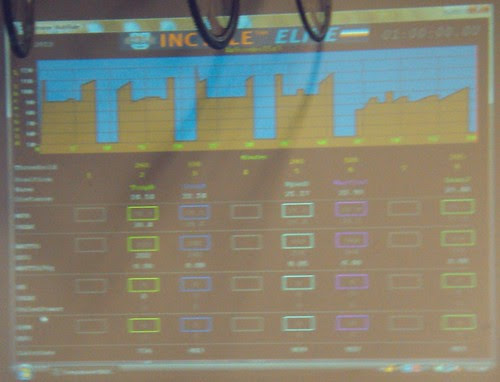 By sheer luck I woke up at 5:20 and looked at the clock. Yikes! I had forgotten to set my alarm. I jumped out of bed, grabbed my bottle, bike and a gel for good measure and hit the road.

Mentally I was trying to gear up for another PR workout but then both Greg K and Ryan D made some noise about it being a rest week and dialed their threshold setting way down… That kind of caught me off guard and left me in a quandary. Do I do the same? Do I say f that and go for broke?

In the end I did neither and opted for a threshold setting of 320 watts. My rationale? I have none. I am an idiot.

In the end I could have gone harder but I could also tell I was tired. We'll see how tomorrow goes and that will be the decider.

And here is the PowerTap data.

Of note is that my heart rate was only between 130-138 during the intervals and my power was between 245-365. Obviously not a super hard workout but I was not super fresh.