Today was testing day at our training and coaching sponsor Cycle University which meant that we did two 10 km TTs. You take the average power from each TT, average those two numbers and this is supposed to give you a pretty good threshold power that you can use for future workouts.

The course? It's one I've done, almost literally, 100 times. 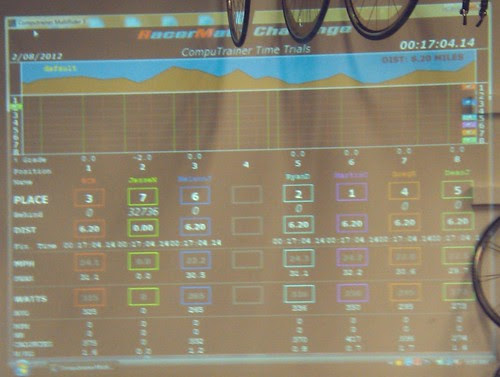 I started the first effort concentrating on not blowing my wad too early. I was actually shooting for a 350 watt average and that's exactly what I got. And I absolutely had something left in the tank on the last incline and did not burn all my matches. On purpose.

The second effort was harder for sure and here my hope was to duplicate my first effort. I was not so lucky… Honestly, even though I Held back a tad on the first effort, it did not exactly leave me fresh as a daisy for the second. Still, I thought it was not bad to only drop six watts.

Here is that CompuTrainer summary.

And here is the picture. Obviously I was still breathing pretty hard as my hand was shaking. 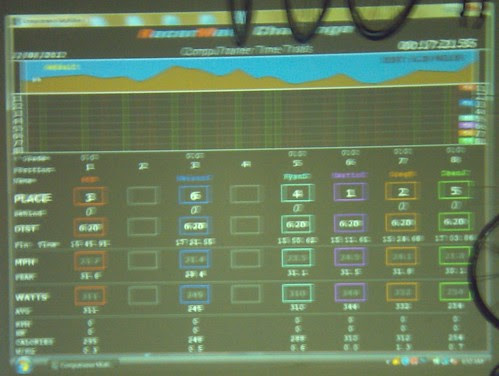 Here is my PowerTap data.

At the end of the second TT I gave it everything on the last incline and you can see my power spike whereas at the end of the first TT I was just trying to be steady. What's interesting to me is that 1) my max heart rate was just 159 and 2) that it was lower during the second TT than during the first. Am I that fatigued during the second effort? And what is with this ultra low heart rate? It would be interesting to take a max heart rate test and see just what I am capable of these days - it's obviously a LOT less than when I was younger.

You can also see my speed drop off precipitously at times during the second TT, I definitely did feel more consistent during the first ride and really made an effort to keep the pressure on when crested a hill and hit a descent. Not so much during the second ride.

At lunch I checked the core box again, two days in a row felt really good.