I'm still pretty sleepy tired today; because I continue to not get enough sleep. More and more I'm realizing that sleep is crucial for recovery. Based on my experience it's pretty key to staying healthy in general really.

On the other hand, I had another great/milestone workout this morning so that much is going right in my life. 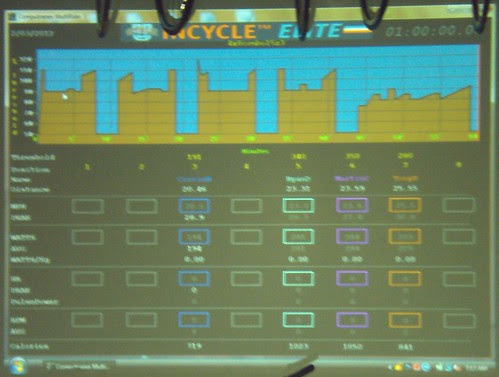 Today it was the Friday crew which lately has just consisted of Corrie M, Ryan D and Tony B. We got strapped in and took off for to me is one of the harder workouts we have done indoors this winter. Eight minutes may not sound like much time but those peaks take you all the way up to 110% of your threshold power and 90% is the lowest that you go. That's hard for me.

I was a little concerned about my ability to recover from Tuesday, Wednesday and Thursday so I turned to Ryan and asked what he was going to set his threshold power at. "335 watts." he replied so of course my concern promptly evaporated and I did likewise. :) MEN. TESTOSTERONE. Whatever.

That first interval was hard but not as wicked as last week so during the rest I upped my threshold power setting to 340 watts. After successfully completing the second interval I instantly knew what my goal for this morning was and increased my threshold another five watts to 345 and then another five to 350 after the third interval. And I managed to finish the fourth interval! Yes. The last 15 minutes at 350 watts were not so bad and I don't mind admitting I was a little elated after this ride.

And here is my Garmin data.

At lunch I went down to the IMA and finished my core routine and had slightly better motivation than Wednesday but not much. I was also walking around VERY SLOWLY today and first time in I don't know how long I think I need a rest week for realz. In the past I have only taken a rest day or two but now it feels like I start every workout with heavy legs and then they sometimes come around but sometimes not and I feel like crap.

I'm not really sure how to workout during a 'rest' week but here's to figuring that out.