This was a total impulse event on my part…

I could have gone for a run (endurance) or a road ride (more endurance and/or hills) or I could do this RACE. on my SINGLE SPEED. Since I plan to do a fair bit of racing on this bike in 2012 I figured it would prudent to give my bike handling skills and legs the shock treatment. Oh yeah, it might be fun too. Plus, it didn't start until 10 AM; can you say hello big, leisurely breakfast?

Did I know how long the race was? No idea. Did I have any course knowledge? None. 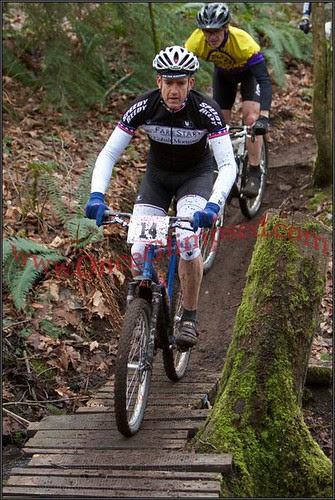 Man did I get schooled! But let's start at the beginning.

I was eating a fairly big breakfast when I looked at the flyer more closely and read the race started at 9 instead of 10 like I thought. Oops… So I stop eating and throw all my shit in the van and head down.

ASIDE - this is the same drive I have done a bazillion times going to Pacific Raceways but early Sunday morning it's a dream. No traffic!

I got a parking spot right across the street from the freaking start line! No way could it have been any more convenient. I was even pointed home already to expedite my return trip. I registered and then walked some of the trails to see what the heck this park was like and it looked really good! Fairly fast, not too technical and a couple of air bumps right before the finish. Show time. I went back to the van, changed my clothes, aired up my tires and did a few laps around the neighborhood to warm up waste time, had a gel and a sip of water and headed over to the start. Nice, there were only a couple of other single speed bikes here so the odds of me staring in a 'big fish small pond' scenario were looking promising.

As the beginners were queuing up I went over to Deanna M and asked when the Expert category was taking off. "10:00, just like it says on the web site Martin…" Damn. So I got back in the van, turned up the heat and did nothing for 30 minutes.

Then I got out, had another gel and another sip of water, got back on my bike to do a few more laps of the neighborhood and headed over to the start again. I am an idiot. Did I mention that this time there were about 15 single speed bikes lined up? Yep, and I recognized several faces. Suddenly I was a very, very small fish and the body of water had grown considerably.

A couple of last minutes jokes and we were off. 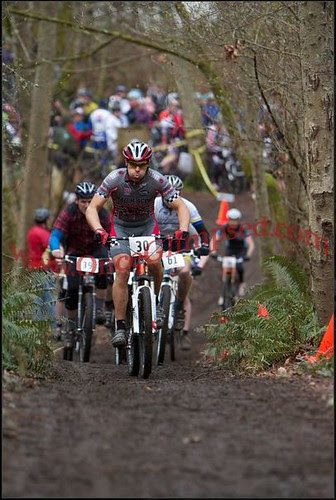 This race exposed ALL of my weaknesses. I don't have a great start, I'm not fast and my bike handling sucks.

We started out on a slimy doubletrack trail. I had fenders front and rear to keep my pretty white arm and knee warmers clean but just about everyone else did not. As a result I was getting the shit thrown at my face right from the gun as we raced to the singletrack. I could see the leaders pulling away and there was nothing I could do about it; my legs just were not turning circles fast enough. After some fun corners and a few slippery roots and a short climb we got to the first bridge. I was off my bike before you could say, "Ever thought of spending any times in a skills park Martin?" At least I did not fall and managed to limp/hop/shuffle along the 10" wide bridge to where it ended and got back on. 50" later I rode over a root, stuffed my front wheel and went down bruising my right knee on my stem or some other unforgiving part of my bike. Good times.

Not only did the remaining single speed racers pass me as I tried to extricate myself from the brushy, muddy bog next to the trail, in very short order the Expert geared bikes that had started 60 seconds behind us were breathing down my neck. Not wanting to be that guy I pulled over and let the lead pack of roughly 10 riders by.

Lap number one went like that. Every so often I was pulling over to let faster geared bikes leave me in the dust.

On lap number two I took a header in a different spot on the course and this time whacked my left shin. I knew it was going to bleed so did not even bother looking down and just got back up and carried on. When I got to the narrow bridge where I bailed on the first lap I rode off the bridge again but this time had enough momentum to keep it together and rode along the side it and managed not to dab! And then I cleared that dumb log 50' later good and proper. Progress.

As I started lap number three (we were doing 3.5 laps - the course had an upper and lower loop) I was pretty much alone but still riding at my steady rate whatever that was. Apparently it was enough to reel in some other people as several started to come back on the last lap. I passed about 10 geared bikes and even passed back two single speed bikes.

One of the single speed bikes I passed was Peter S who I know from the track and mountain bike racing and who is a better bike handler than I. 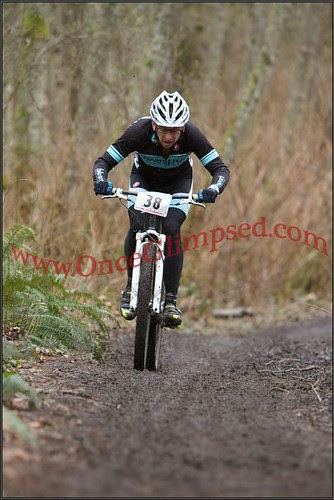 I would eek out a small lead on some of the climbs and he would pull me back on the descents. Ouch.Finally, on one of the last climbs I managed to ride all the way up and Peter unclipped and that gave me a gap I was able to sustain until they finish. Sometimes the 'race within the race' is all you have for motivation, especially when you are as far off the back as we were.

With less than one mile to go this guy on a single speed bike comes roaring past me! I recognized his checkered shirt from the start and he was absolutely drilling it. I was like, "Nice, I just got lapped!" When I learned that he had broken his saddle and had to hit the pits, grab some duct tape, repair it and then get back in the race it was not much of a consolation. He was going WAY faster than I was. 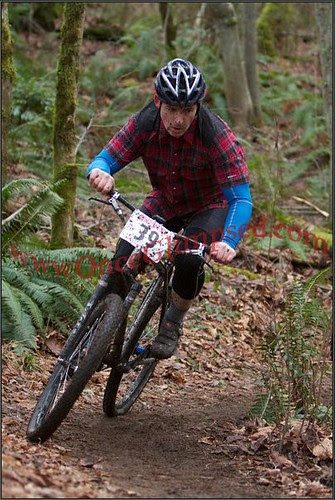 Whew. That was tough. But fun! After my shower the cut on my left shin is not so bad and after hosing off my bike it looks normal again and after soaking my white arm and knee warmers (what was I thinking?!) in OxiClean and washing them they almost look normal.

Looking at my Garmin data below it's at least encouraging that although I was feeling more and more beat down as the race progressed my heart rate did not go down. In fact, my max was on the last lap! I guess yesterday did not totally kill me. I also rode more of each lap as the race progressed so even though I was getting fatigued my bike handling improved. It does appear that my speed drops off ever so slightly in the third lap though. I did feel I was sorta taking it easy when I was all alone.

I carried a bottle with me and there was NO place to take a drink. Lesson learned. I think I want to do another one of these.