The goal today was 'moah powah'. [Said in my best Arnold Schwarzenegger accent.]

And I achieved it.

I won't to lie, not doing stairs or weights on Tuesday definitely helped me out today. 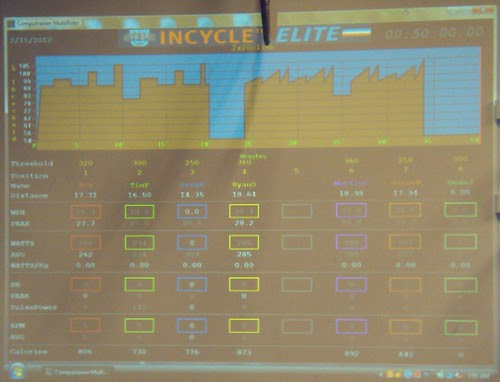 We almost had a full house! High attendance is good for my motivation.

Since I was relatively rested and woke up early enough to have a snack I decided to go for a PR of sorts today meaning I would start the workout at a higher threshold setting than before. It's always tough to get in a warm-up for these as you can only show up so early to a 6:00 AM workout but I managed to spin for at least five minutes. :)

I was breathing pretty good after the first interval but my legs felt great so I took the chance and increased the power. Funny how sometimes 10 watts is really noticeable sometimes not so much. Going from 340 to 350 I could feel it but then going from 350 to 360 not so much actually. I'm convinced all this indoor stuff has to be taken with a HUGE grain of salt… it's just another metric and not very real-world.

Still, I was pretty psyched by today's metric. :) The next goal is to start this workout at a threshold setting of 350 and not need to turn it down. We'll see when I can do that.

And here is the PowerTap data.

Not sure why my Garmin Edge 500 cuts out so often, you can see the speed drop off numerous times and I can confirm that many times when I looked down I saw, "Auto Paused" on the display. Seems like a glitch? it would Auto Resume almost immediately but still, why does it drop off?

You can also see my heart rate climb a little during the second interval which makes sense as I was going harder. On the other hand, you can see my cadence drop slightly because I shifted to the next smaller cog for the second interval trying to give myself a break as in I was not sure I would be able to maintain my cadence with the increased resistance… Usually I have a harder time getting my heart rate up when my cadence drops but I guess it has to drop significantly and this time it only tailed off very slightly. You can also see my power increase a tad which makes sense.

At lunch I got down to the IMA for the usual core routine. Because Ryan D and I had been talking about it this morning at Cycle University, I tried to lift my top leg while doing the side plank and to my surprise I was able to hold it up for 10 seconds. Twice! The last time I tried this I was literally only able to keep my leg up for 2-3 seconds… Maybe I will try this again. If I remember.