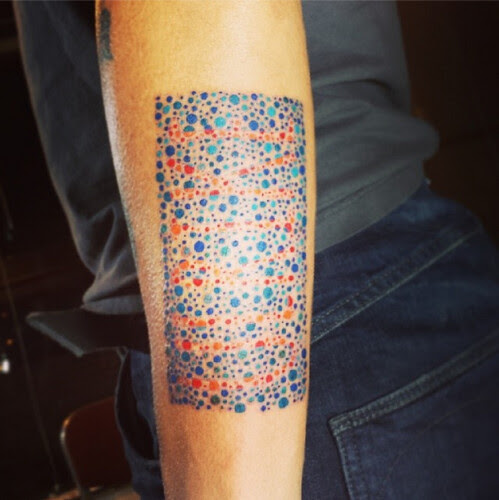 I seem to be in the midst of an accelerating mid-life crisis or some similar need to live in a manner that people stereotypically do when they are younger. So it goes; I'm having fun and won't fight it.

I got my first tattoo (Cameron's hand print on my left shoulder blade) a long time ago. I still love this piece and have never even come close to buyer's remorse. Then for quite a while I did nothing more.

After some years I saw an incredibly cool piece of art which spawned an idea for a second tattoo (a cyclist on my left forearm). I had to really work in order to contact the original artist but eventually I managed to get hold of him and asked him if I could get a copy of the image so I could manipulate it. It took months but finally he agreed - but only when he was sure I was not going to mass produce his work. I dumbed the piece down so the level of detail was appropriate for skin and got it done.

Just a few years later came two more; a copy of the wedding ring I designed when I got married to Shelley and a piece on my upper left arm that is perhaps the only 'symbolic' piece I have. Not that symbolism is important mind you, I figure you just need to like your tattoos for whatever reason.

About two weeks ago I got some text on the inside of my left forearm which although it looks like serious advice is rally just a friendly reminder to myself about why (and how) I do the stuff that I like to do.

Last night I got this: 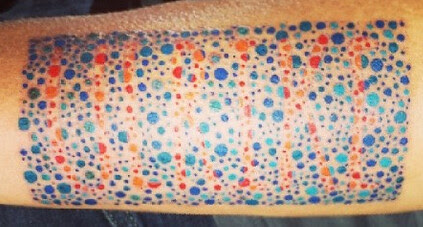 I had been thinking about some way to represent Ulrike (my mother) for what seemed like ages and try as I might I kept drawing a blank. Not being in a rush I let the thought simmer. This is roughly how this piece became reality.

I use a massage therapist that likes to decorate herself. I really like some of her pieces that use little dots (stippling) as color fill and shading. One day as I was surfing fonts I stumbled on a color blindness test and it hit me. I had been looking at all these lame (in my humble opinion of course) Gothic fonts because my mother was German but they were all putting a big, fat "X" in the cliché box for me. This looked cool. Plus, it was so colorful! I asked who the tattoo artist was and got the ball rolling.

ASIDE - having waited do long it was torture to have to book this so far in advance once I knew what I wanted. But I'm not such a bargain hunter when it comes to ink in my skin so opted to wait it out.

There is no hidden meaning here and as far as I know Mom was not color blind. If she was it dawned on me that this could be construed as a cruel joke.

Hahaha... oops. Here's hoping she was not but if she was I think she would still appreciate the work.

I just love this piece! Not sure if I'm lucky but so far I'm batting a thousand when it comes to these and I am still super excited about each one. Of course you know what that means, right? This mid-life crisis is most likely going to get extended.