Hell yes! Even when I don't feel great (I had two 23 oz beers last night) and even when it's not a bright sunny day, this thing called trail running is pretty damn fun.

Okay, I did skin my knee but after my shower the scrape was embarrassingly small so no biggie. Still, before the shower…? DRAMA. 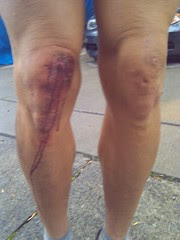 Last night Justin A gave me a shout and asked if I'd like to roll the standard Cougar 10 and I was like, "You're damn right I'd like to…!" I guess I was so pumped up (or something) I forgot to sleep. Top that off with a slight hangover and I was primed.

Thank goodness Justin was coming off of three stout efforts and wanted to take it easy so everything worked out in my favor. Besides, he talked the whole time so all I had to do was breath and run.

The trail was in excellent shape today! It had rained hard about two days ago and portions were already dry. There also was hardly any fog so visibility was better than the last time I was out here. Interestingly, there were a lot of leaves on the ground and they seemed to reflect the light from our headlamps in a weird way or maybe they were just distracting… bottom line is they made it hard to see and both of us almost rolled our ankles about five times.

And we each fell down.

Last time we were here I chastised Justin for verbally pointing out obstacles in the trail. I guess I felt a little like I was on a bike ride with a bunch of n00bs where everyone is shouting stuff like CAR BACK and HOLE at the top of their lungs. So it probably serves me right because this time he just made a subtle hand gesture and I promptly ran into the stump he was indicating I should avoid. D'oh…!

We were going uphill and so pretty slow and the fall was not bad at all. I just stuffed my left hand and got my right knee a little dirty and we carried on.

About a mile or two later Justin had the sympathy fall. He was going a little faster and tumbled down the trail a bit. I joked that he was much worse off than I and we continued.

And by continued I of course mean that Justin continued to talk while I listened. I heard all about the highs and lows of trying to find a teaching position at a university, a wicked cool new bike he just got (hello, jealous!) and we discussed some of the finer points of cycling culture.

As we coasted to a stop and walked the last bit to the car I noticed he had a bit of blood on his elbow and reiterated that he sure had gotten the worst of our falls. Then I looked down and boy was I wrong. My knee looked positively gory compared to his little, red elbow.

I'm always amazed at how accurately Justin can judge our pace on this route. As we finished he said, "That felt like a 1:29." Damn if he wasn't right. I just felt okay and so it was a good thing we were going really mellow. Another thing that amazes me is how much of a difference in pace is required to shave five minutes off this time. It's significant.