Lots of firsts for me today.

I wanted a longer run today and that is just what I got. Boom.

Running this fall has gained momentum for a couple of reasons.

What is my goal? To run the marathon distance at the Evergreen Trail Runs Grand Ridge event. If I have stated this before and am repeating myself it's just because I'm trying to psych myself up. Even three months ago attempting this would have been inconceivable to me.

As usual, I woke (4:00 AM) well before my alarm was scheduled to go off (5:00 AM)… On the upside it gave me the opportunity to have some food and hopefully allow it time to get assimilated prior to starting. How did I feel? Okay I guess. I was a little tired during yesterday's run but it was not for or fast so hopefully I was going to feel sharper today.

I met Justin A at the Issaquah Community Center at 6:45 and we realized that headlamps were going to be in order for sure as it was still pretty darn dark out. On the up side was not cold at all and I debated even wearing my wind vest. In the end I opted to bring it along just to see how it felt and just in case it got colder up top. Turns out I did not overheat and there was one stretch near the top when we started to descend where it felt good so that was not a bad decision.

On the docket today was a modified Fat Ass loop in reverse. Stands to reason then that a larger loop than a 'fat ass' is a 'cottage cheese ass'… It actually took Justin explaining that to me before I got it. Sheesh.

After running a few blocks through Issaquah and stopping twice so that Justin could fine tune his watch alarms we were in the woods. The trail starts out by going pretty much straight up for a little longer than I wanted. And since my tendency is to start a little too fast I was breathing pretty good by the time we got to the upper Tiger parking lot and hit the Tiger Trail proper.

I had been told that it was pretty much up for 90 minutes but I guess that did not sink in properly until we gone about 30. We've all been there, right? It's that feeling of being sort of spent already and then looking at your watch and realizing you are not even close to half way to where you want to be. Ouch. I tried to hang in and think I did okay. Luckily we walked the steepest pitches including the last on up a gravel road to one of the Tiger summits where we passed a 'hiker's hut'. 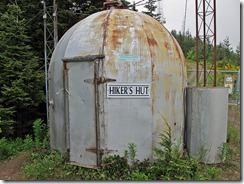 I had to stop and peek inside… Talk about Spartan facilities! There is a bench around the inside and that's it. No wait, there was a metal sign leaning up against the wall behind the bench that was riddled with bullet holes. Then it was down the mountain on that trail to the left of the hut.

During my last couple of runs my left big toe had been bothering me. For some reason I was developing a blister right at the edge of my foot where the sole meets the upper. I had mentioned this to Justin and he said, "Sounds like a callus issue to me." Damn if he wasn't right. I guess experience is worth something. So last night I diligently buffed the callus down and even put on a preventative Band-Aid under my sock this morning to help reduce the friction. As we started down I could tell right away that my feet were swimming around way too much in my shoes so had to pull over and tighten them both. Much better.

As we got moving again Justin said something like, "Whew, I finally feel like I'm warming up!" and proceeded to put about 20' into me on the very next incline. It was times like these that made me just a little concerned about whether or not I had bitten off more than I could chew. And as we approached the two hour mark I experienced something pretty similar.

There was one climb on the 'descent' from the summit that was a bit of a bear. Justin warned me about it but in my state of exhaustion I did not quite catch all the words and so did not know how long it was. In retrospect I think he said two minutes but at the time I had no idea. As the trail tipped up I instantly had to walk. It was pretty nice to hear Justin tell me that it was all downhill from here once I reached the summit.

I gotta say, in spite of being tired the descents were a blast! I never got the point of having rubbery legs and never bonked; my tiredness was just from not having ever gone this distance before. I actually managed my nutrition well! I had my first gel at the Tiger summit, another about halfway down and sipped at my bottles all the time. Calories were definitely not the issue here. In fact, my stomach felt a little too full of fluid towards the end…

We never flew down the trail but we did lay off the brakes some and it was fun. At one point Justin overshot a corner and ran off the trail to the outside of a turn. I was hauling ass right behind him and followed his route only I was not able to correct in time and did a summersault in the brush. Luckily it was not big deal and we carried on right away.

Some of the wood bridges - especially the older ones - are like walking on ice! One that was in a serious state of disrepair (it was listing to one side) we totally avoided and forded the creek beneath the bridge. Another was so slick I was able to skate across at least half of it - on purpose of course. :) It was really nice when they were covered with chicken wire or when the wood was newer and not so covered in slime.

I had a couple more 'interesting' sections were I had perhaps too much momentum or just was not able to properly direct my momentum but luckily did not go down again.

The last part of the descent was perhaps not quite so much fun as it was very rocky and you had to be careful or turn your ankle. Which I almost did once. No biggie luckily, I was able to walk it off in very short order and start running again.

When we finally exited the woods by Issaquah High School we crossed the street and got on a beautiful but very firm concrete path. It's amazing how hard this felt after spending all day on pretty perfect dirt covered with pine needles in places. It was HARD. Thank goodness we covered that in less than five minutes and then popped out in the parking lot where we started.

Wow… considering my effort I felt pretty good. I never bonked, I only had to jam on the brakes and walk (when Justin was still running) twice and one of those times was that last two-minute climb. This run was a great exercise in pacing for me as it was the classic LSD outing and that is exactly what I need to do if I want to run another seven miles.

I did some stretching, changed my shirt, drove home, had some food and four Ibuprofen and felt not bad at all. Will I be sore tomorrow? For sure. But hopefully not incredibly and hopefully after a couple of rest or active recovery days I will be able to ramp up for another good run next weekend. Lather, rinse, repeat. :)