"You're going the wrong way…!"

That's what some guy yelled at me as I was riding backwards on the course when I had finally managed to put about 15 PSI into my front tire after getting my third flat somewhere around mile 40.
But let me start at the beginning and catch you up.

Bend, OR/Mt Bachelor is a freaking GREAT place to ride mountain bikes. I had only heard this from others never having been there myself so took it on faith when I signed up for the High Cascades 100. Turns out the 'others' were right. The course was one big loop…! How often do you get to ride 100 miles and never ever cover the same trail twice? This was my first time and I loved it. 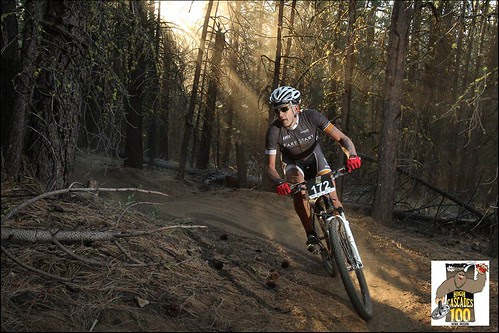 Okay, there were also sections called, "5-mile climb" but it's amazing how fast you forget stuff like that.
All of these 100-mile races seem to start at the freaking crack of dawn. I suppose that is to be expected with most people taking around 12 hours to finish but it's still a jarring experience when the alarm goes off at 4:00 AM. I forced down some breakfast, got back in bed and waited until the last minute to get dressed (of course I had the usual clothing debate with myself but in the end I chose right and was perfect) and rolled to the start. I think I left my room at 5:10!
At the start it was dark! 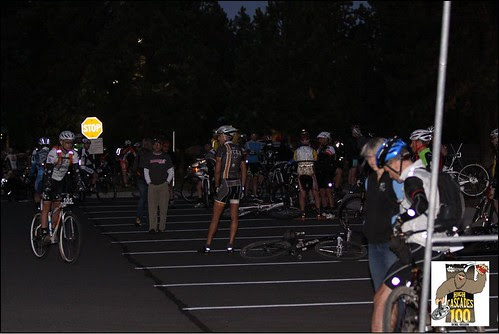 After the big shots got called to the front we started right on time and did a neutral roll-out leaving the Mt Bachelor Village Resort and headed down the road toward the ski area. Thankfully no one was pushing the pace and all the single speeders were able to keep up. We did about six miles of pavement and then turned off onto a dirt road where the pace picked up. I was feeling pretty darn good and kept squirting around people and in some cases riders were losing traction and getting off their bikes and each time I got lucky and just rode on by… I moved up quite a few places on this section of the course but the leaders were also riding away from me. No way can I hang with pros. :)

After a few miles of dirt road we hit some trail and it was SO MUCH FUN. Right away it's incredibly twisty but also incredibly rideable. The surface was covered in super fine dust and you would slide sideways but there were some burms on the corners and you could bank around at speed without losing traction. The morning light was filtering through the trees and it felt positively magical. A huge bonus was I was holding my position in the pack.

The first aid station was genius. Volunteers were handing you bottles for crying out loud. If you wanted, you could just ditch your empty, grab a full one and never get off the bike. I opted to stop but only for about 30 seconds.

Some more trail, some more dirt road and one on one of these dirt road sections with lots of sand I felt like my rear tire was moving around more than it should. No worries, I chalked it up to lack of experience riding in these loose conditions and carried on. Shortly thereafter we went under a bridge and the dirt road went UP. I saw a couple of people try to ride it but none of them lasted long. I got off pronto to save my legs and started power hiking.

By the time I got back on my bike it was obvious that my rear tire was indeed losing air and that what I had felt earlier was not my imagination or a lack of skill. Son. Of. A. Bitch! I looked back and there was a HUGE gap behind me so eventually I pulled over to top off my tire.

In a panic I jumped back on my bike and tried to follow but I was practically riding on the rim and after maybe 100 m I had to pull over and fix my flat proper. That's when Gary Ballas and Doug Graver - the only two guys in the entire field I was trying to compete against - rode by. In turn they both expressed their sympathies as I was getting sealant all over myself and installing an inner tube in my now not so tubeless tire. Now that I was finally taking my time I also realized that my pump was not putting sufficient air into my tire… Nice. I would get to something around 15 PSI and then it would just max out. So there I was riding on an extremely squishy rear tire. For the time being it couldn't be helped.
But my race was not over! Oh no. After I fixed my flat and got it sorta, kinda aired up I poured it on and was blowing by the riders that had passed me earlier. I guessed that maybe 40-50 people had passed me and so I was trying to keep a mental count of how many I passed back. I may have made it around 20 or so?

Sadly it soon became obvious that my rear tire was still too soft so at around mile 40 I pulled in to the aid station where there was a mechanic and borrowed a floor pump. Sweet! Very timely too as my saddle had come totally loose on my seatpost and I had to tighten that down or risk losing it. it was here that I noticed that my seatpost was slipping a bit as well, it had dropped one full centimeter so far so I fixed that as well. Undaunted (well, I guess I was a little daunted to tell the truth… but not totally) I was still motivated and pulled out of the aid station and promptly passed another four or five riders on a steep pitch and then grabbed my bottle for a drink.

it isn't that I didn't see the rock coming, I just figured that with my fancy suspension fork I could ride right over it with just one hand on the bars… See, on my previous mountain bike I had opted to go fully rigid and so this fork was still a huge novelty.

I hit the rock and folded like a house of cards.

in the process I sliced the sidewall of my front tire and gauged my right shin. Ouch.

As I gingerly walked my bike off of the trail and saw sealant pouring out of the too-large-to-seal hole and blood running down my leg I decided that now my race really was over. Thank goodness I carry two inner tubes AND the mechanic was only about 3/4 of a mile behind me. I installed the tube, put in just enough air to ride it (which is about all my POS pump was capable of today unfortunately) and started to ride back to the aid station.

There, now you are all caught up. I think I also heard someone say, "That's the third time we've seen this guy…!"

Floor pump to the rescue! Again! I also double checked all the bolts on my bike before taking off just in case. :(

This time my pace was much more leisurely, the trails were incredible and I resolved to just enjoy them since I was at least 45 minutes behind where I wanted to be. I went up a hill, around some corners, started another climb and who should I see but Nick Zylkowski. I had seen Nick and Rosalyn Zylkowski earlier at the Safeway parking lot and had figured they were both here to race the Cascade Classic but no, Nick was here to ride in the dirt. Yeah for Nick!

Nick was fighting with a broken chain so since my race was done I pulled over and we got out my chain tool which was a little better suited to the job and fixed it. Nick looked a little worked and this suspicion was confirmed when we started to ride. Then not two miles later he realized he had forgotten both of his bottles back where we fixed his chain! I asked him if he could continue (he said yes) and so offered him some of my water and then I dropped back behind him in order to keep tabs on the guy. It was getting warm after all.

Then what should I find on the trail but a full, unopened bottle of water. What luck. I picked it up and when I caught up to Nick we stopped and shared it.

ASIDE - I could have picked up quite a bit of loot today if I had stopped each time I saw a full gel packet or bottle of pills or food bar or whatever, people were losing their shit big time on this ride it seemed.

The rest of the ride was fun! It was not fast but that was just fine with me at this point. We stopped at all the aid stations, got our chains oiled and our bodies fueled and hydrated and rode and chatted. Meeting nick was a stroke of luck. And he hung in there really well! We walked/rode the 5-mile climb together, rode a leg-sapping sandy climb after mile 75 together and then with about 15 miles left he started to come around. By the time we hit the pavement which took us back to the finish it was all I could do to hold his wheel. Deservedly, Nick crossed the line ahead of me. Way to tough it out Nick. 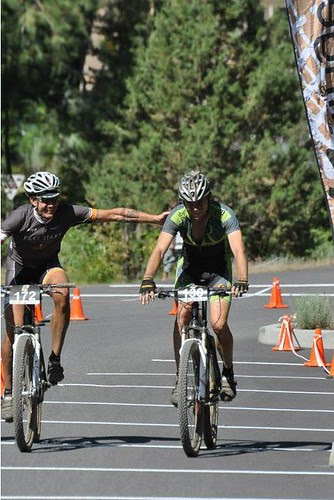 ANOTHER ASIDE - I have since learned some tricks for installing tubeless tires when using Stan's No Tubes tape.
At the finish they were handing out little cotton towels that had been soaking in coolers full of ice water. Hello mountain bike race promoter! This is genius and it felt SO good. We all had massive dirt tans and some riders looked like raccoons with all the dust on their faces.

I wiped my face off and then headed straight back to my room for a shower. Then I rolled back to the start (did I mention that my room was less than .5 miles away from the start/finish?) and indulged in the post-ride food and beer. And sun. And then I got an invitation from Gary to join his family and friends for beer and pizza at their pool! I was rapidly forgetting all my flats and my crash.

Put this race on your bucket list! The trails are amazing and the support is worth the entry fee.