My ankle injury has really facilitated my cycling. The irony of this is not lost on me as I quit racing bicycles last year to focus on running and then once the 'running' year started I promptly injured myself requiring me to take three months off. So it was back to the bike in an attempt to maintain some fitness.

Today was my longest ride this year and probably my most fun one too.

John Phillips and I signed up for the Cascade Bicycle Club Flying Wheels Century that covers roads we have both ridden countless times. Still, when there is support and lots of wheels to follow it makes these super familiar routes a little more exciting. 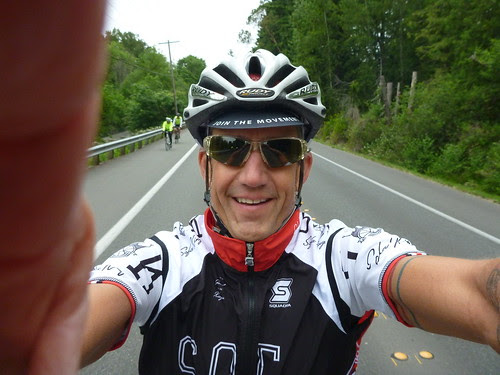 We pulled into the start corral at Marymoor Park and oops... there was no food. Rats. The last time I had eaten was quite some time ago and I had counted on a bite to help hold me over to the first food stop. Not today.

Within just a few miles you get to what is probably the hardest (for sure it's the steepest) hill of the entire ride. It's one hill where you will always see at least a few walkers. As we hit the bottom I realized that I had left me Garmin Edge 500 set to the wrong bike profile and so was not getting any power numbers. D'oh...! As I scrambled with the buttons to change the bike profile the hill kicked up and there I was in the saddle trying not to fall over. By the time I got things sorted John was waaay up the road. In fact, he was flying! Was this going to be a century 'race'?

On this ride you see all kinds of bicycles.
You also see all kind of cyclists.
On this hill I found myself next to Mr. Carbon on a Giant with the full Giant kit. We were both in our lowest gear and as I got out of the saddle to accelerate up to John so did he and all I could hear was the (to me) incredibly loud TICK, TICK, TICK of his rear derailleur contacting the spokes. I thought it would be an enormous shame if this guy's $10,000 ride exploded just because his rear derailleur was not adjusted properly... Obviously wealth is not directly related to your ability to maintain your bike.

After this hill and the following descent we connected with this incredibly fast recreational rider. He would pull and pull and pull always at 25+ mph. John and I would fake it and then pull off after slightly less time on the front. As we turned up onto the Cherry Valley loop this guy drills it on the climb. Suddenly John and I are adrift and I glanced over at him with this questioning look of, "Should we go with this or not...?" I ended up letting Superman get a gap and then reeling him in slowly. From there it was pretty much full tilt until we got the first food stop. Where he said thanks and promptly rode on. I thought wow, I can't hang with that for 100 miles...

After some bread, peanut butter, pretzels, Nuun and a pre-packaged Kellogg's Rice Krispies Treat we were off again. 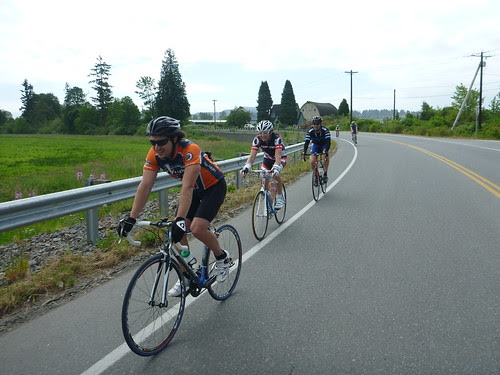 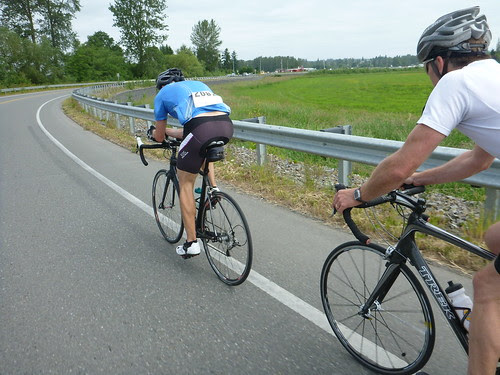 Let me just say that triathletes are great to find on these rides. They are always 'trying to get in a workout', they don't care if they spend ages on the front (in fact I think it's a source of pride for them) and as long as you don't overlap wheels you get an awesome armchair ride to wherever you are going.

With the help of these two we continued to haul ass all the way to the second aid station. Where we saw - wouldn't you know it - Superman. Not sure if he ran out of steam or just didn't find anyone else willing to play his 25+ mph game but it made me smile to see him again.

More bread, more peanut butter (this time with tortilla chips in the sandwich!) , more Nuun and we took off.
We actually sprinted out of this aid station... As I was walking back to my bike I saw Superman and his group roll out so I yelled at John and we grabbed our bikes and gave chase. It would have been a shame to miss this train. :) John took a hard pull, I took a hard pull [This was feeling like bike racing!] and we were on. And luckily for us they were not truly driving the pace.

The pattern continued. That pattern being about five people pulling and roughly 20 following. No worries, it was a recreational ride and I was definitely not here 'to get in a workout', I just wanted to finish, have fun and still be able to run tomorrow. Accordingly, I tailored my pulls to suit. This meant I would go pretty fast but not for too long. Just long enough and fast enough to impress. Yes, I am super shallow like that.

After the last food stop we lost Superman but did connect with a large contingent of Eastgate Cycling Club members and some guys from the Cascade High Performance Cycling Team. And this other guy...

Other Guy had on a matching kit and would constantly hang out in the front five. Just as soon as HE had recovered sufficiently to produce another effort he would sprint past the person pulling like it was a race and he was attacking. Of course his attacks were extremely short-lived and we would haul him back only to have him repeat this performance. Nice. As entertaining as this was, the surges were whittling down our group and we rolled out with perhaps 30 and hit the last hill with maybe 20.

ASIDE - you can probably guess what happened here on the hill... that's right, the attacks stopped. In fact, Other Guy went backwards like he had just pulled the chute on the drag strip. See ya.

This last hill was hard. Especially since it turns out one HPC rider had been saving himself just for this effort. As we hit the last pitch he launched. I tried to keep pace and managed to do so for the first half of the climb but then I felt like the submarine in all those war movies that has to dive deep to elude the destroyer. One by one the bolts started to go PING and burst from the hull as I slowly fell apart and had to slow down. Ouch. I got to the top pretty cooked. The only saving grace is this HPC guy had to wait for all of his friends that he had dropped so when John caught me we rode off together and left them behind.

From here it's all down and then flat to the finish. We connected with some more HPC riders and enjoyed a nice paceline all the way to the finish.

I'm not sure if they are told to do this but all the HPC riders were super diligent about yelling CAR BACK and CAR UP. Not only that, they would yell CLEAR when there were NO cars around. C'mon people... relax.

As we approached the finish in the park John and I finally shifted to the small chainring and sat up. Not these HPC riders. They dutifully killed it all the way to the line. No doubt in search of a PR or bragging rights at least.

Welcome to the by now ubiquitous recovery(?) drink or recreational rides. 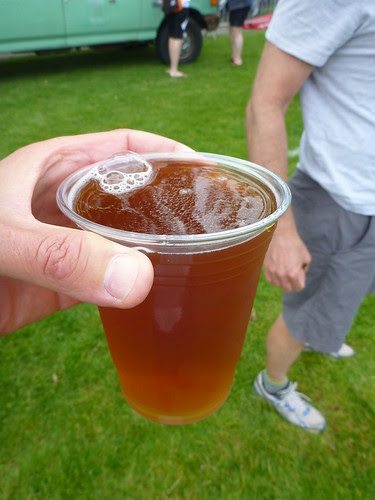 What a good time! It could have been a bit sunnier and a bit warmer but really, for a ride it was super nice and I dressed perfectly. Plus, not having to worry about getting dehydrated was nice. What was also really nice was all the groups we connected with throughout the day! It let us go fast, get plenty of rest and made the ride way more exciting. Thanks Superman, Eastgate riders, HPC riders, orange jersey guy and triathlete guy.

To top it off my back was only a little tight/sore and my legs did not feel like stone. Bonus. This is what cycling should be.