Oof, my biggest run to date since my ankle injury (and maybe ever in terms of total time). Here goes nothing.

An old friend of mine - who also happens to be named Martin - invited me on this run and I impulsively said yes. I figured it would be the perfect topper to a solid week of training as I try to get ready for my first 50-mile trail race. The day could not have been better. Yes, it was hot but I prefer that to cold and wet. Seven of us showed up at the start (one had yet to arrive). 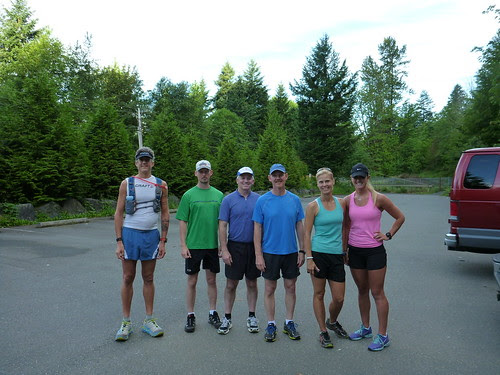 If you look closely you will notice that I am the only person carrying food and drink... what's with that? Turns out everyone else had a 'support crew' there to assist them. They were planning on grabbing water before and after each climb and I even heard one person talking about changing shoes for crying out loud. Me? My goal was to carry all that I needed and to work on keeping moving as I usually stop way too much on longer runs.

Go!
I think I have never been up Little Si in my life so it was kind of cool. The trail is pretty wide, pretty rocky but fun and runnable. As we pulled out my friend Martin turned to me and said, "Why don't you lead us..." so I obliged but boy did I feel slow. Then again, no one passed me.

We pretty much stuck together on the 2.5 mile climb up Little Si and at the top it was obligatory video time.

One the way down I pulled a little ahead of everyone in spite of being conscious about taking it slow. I was resolved not to pound my quads and didn't. At the parking lot I took a short break to make use of the outhouse and as I stepped out the next person was just arriving. Since I didn't have to grab anything from my van I just took off.

After crossing the river we turned left on the Snoqualmie Valley Trail which is just a big, wide, flat gravel path. 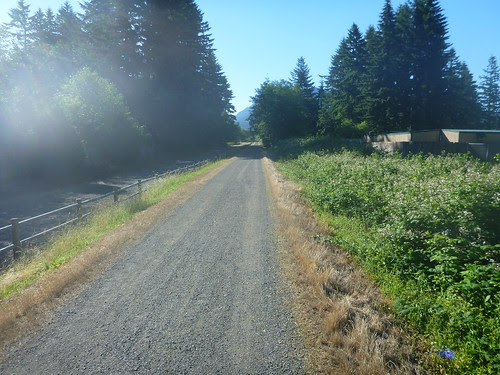 "Go slow...!" I kept telling myself. I also kept wondering if I was going to be running this entire event alone! :( But as I settled into my 9:00 pace my concern was short-lived as just three miles later I was run down by two guys.

I was able to pick up my pace a bit once I got caught and went from 9:00 down to about 8:30 and then 8:15 but that was all I could do. Turns out these guys probably just wanted to catch me because once they did they didn't feel the need to go much faster and I just about hung on to the base of Mailbox Peak. 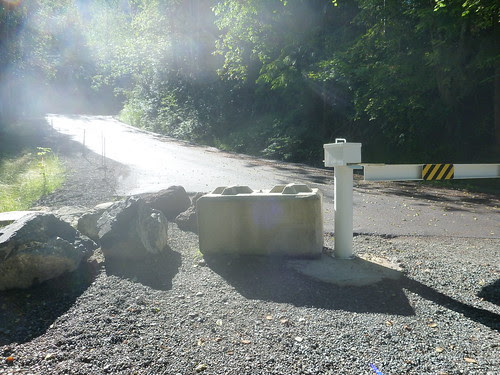 You can't really tell from the picture but that road climbs something fierce. I was walking as soon as I went around the gate.

The pavement ends in about 100 m and then the road goes through another gate at which point it turns to gravel. Funny, but once the surface changed I was able to jog again... I started running and almost immediately I saw a trailhead. What...?! This can't be right I thought, plus there was lots of orange webbing blocking the trail. I walked up and read the sign and it turns out the DNR is building a new trail that will take twice as long (and be correspondingly half as steep) to reach the summit. I bet a lot of folks will appreciate that!

But I was confused... Having only been up this trail once before in my life I walked up the road for a bit and not seeing another trailhead right away I walked back down. Then I second guessed myself, turned around and started running back up the road. The old trail had to be just around the corner and sure enough it was. Done. And within about 300 m so was my running! God Mailbox is a steep trail.
And unrelenting! Once it tips up for real it just keeps going. You are on this 2.5 mile staircase and there is almost literally zero letup. I tried to shoot some video while climbing but it doesn't really capture the grade.

If stairs had roots this would be one long ass flight.

Finally I broke out of the trees and there it was, the mailbox.

I'd like to shake the hand of whoever carried this up here... 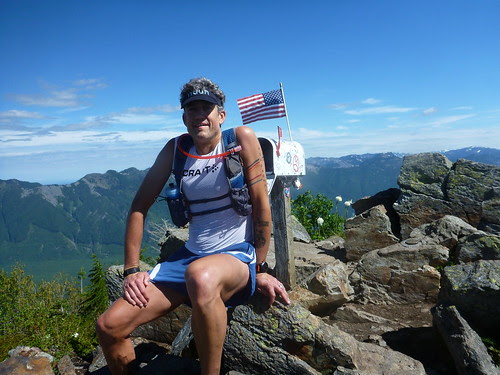 After some pictures and a bite and a few words to the other guy up here (who kindly agreed to take my picture) it was time to go back down.

This part was kind of tricky... You can't really run down a trail like Mailbox, you sort of hop, skip and jump and half the time you are grabbing trees to arrest your fall. I was pretty cautious but still made reasonable time. I still stopped for Salmon Berries thought, man were they perfectly ripe. 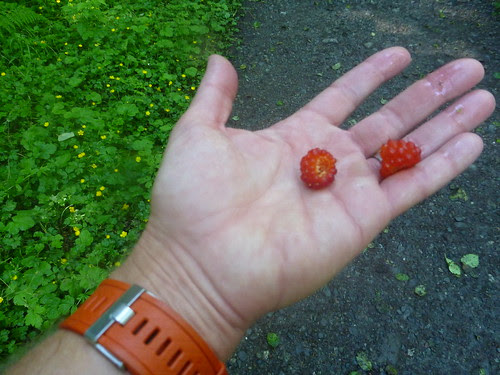 I think that has to be my least favorite kind of running. Thank goodness I had the foresight to bring along my iPod! As I ran along I slowly unwound the cord, threaded it under my shirt and vest, clipped it to my shorts and pressed play. Boom! Suddenly I was transported to a land of great music and boy did it help.

On the run back to Little Si I actually went a little faster than on the way out and as I ran back I realized why... the road climbs just a little as you head east so the run back was down perhaps a half of one percent decline. Still, it was noticeable. And it helped.

In spite of the gravity assist I had to walk for a bit. That 5.5 miles was killing me.

Did I mention that it was hot? Yes it was! The Mailbox trail was mostly in the shade but I was still sweating up a storm and the run to and from Mailbox was mostly NOT in the shade. By the time I got back to the parking lot my bottle was empty and I was feeling the bladder in my vest and it did not feel so full... Then I remembered I had a mostly full bottle of San Pellegrino in the van! Can you say 'life saver'? I downed that bottle one go. And my stomach did not feel sloshy. A quick trip to the same toiled I had used on the way out and then it was time to run.

One more peak. I don't mind admitting that my legs were pretty tired at this point. Whereas I had run about 95% of the Little Si trail the first time up, this time I ran maybe 50%. But I was plugging away which was my goal for the day. Don't. Stop. Moving. Foreword.

Climbing up Mt Si I went on trails that I have never travelled before. It was cool and super scenic and there were hardly any other people here but damn was this old trail steep. First you head up Boulder Garden Loop and then onto the old Big Si Trail. There are two spots were you can enter the Bolder Garden Loop and Martin had told me that the second one was, "Shorter but more rugged. I recommend you take this one." Okay Martin. And you were right, it was more rugged. I felt like I was right back on Mailbox for a bit.

When you finally do get to the old Si trail there isn't any sort of sign except for one that says to stay on the Boulder Garden Loop go this way. So by employing my powers of deductive reasoning I went the other way. Which was also straight freaking up. And which also DIDN'T EVER LET UP. Holy cow, this is one steep ass trail.

I climbed. And climbed, and drank and ate gel and drank some more and kept on climbing. Whew. Finally I could see the trees start to think and then there was the new Mt Si trail to my right. But the old trail kept going up so I just stayed on it and finally it merged with the new trail just before you break out of the trees.

After clearing the rock garden I was able to run again and finally I tagged the bench which we had agreed was our turn around spot.

Yes! Climbing all done. I was beat but thrilled at the same time. I sat down and enjoyed the sun, the view a bit more gel and what turned out to be my second-to-last sip of water. Pretty good timing I must say. I also realized I had a couple of giant bug bites on the inside of my right calf. How does that happen without you noticing it...?! 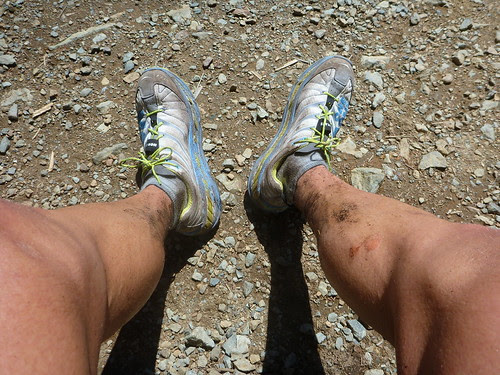 As tired as I was the descent from the top of Mt Si was still fun. I had managed to give myself a couple of small blisters today but they didn't pose a huge problem and gingerly bounced down the mountain. The old trail was FUN this time around. Much of the surface was way softer than the new trail and there were fewer rocks. And when I got down to the Boulder Garden Loop I went the opposite direction from what I had taken on the way up and it also was smoother and softer. Very runnable.

Down, down, down. Pound, pound, pound. At one point the trail tipped for more than a few feet and I found myself walking! Ouch.

But then I was done!

And there was Heather (Martin's wife) offering me a giant beer and ice cubes! What a dream. So as not to fall over I walked a couple of laps around the parking lot, changed my clothes, ditched my running shoes, had my recovery drink and then took advantage of that beer and ice. Let me tell you, an ice rub when it's 85 out is pretty damn nice. Not only does it get rid of the grime and salt but it felt SO good on my muscles. Thank you Heather!

All in all it was a huge day for me. I achieved my goal of basically not stopping during a long run, I ran for more time than I ever have in my life and I managed my nutrition (food and drink) really, really well. There was one point on Mailbox where I realized I was getting a bit behind in calories and I made it up and never looked back. And thanks to that bottle of water in the van I had enough fluids as well. I only consumed two Endurolytes all day but I didn't need any more so again, it worked out well. The only issue was my feet which suffered more than they should have. I'm going to try some new socks ASAP to see if that helps. The shoes are super comfy so I don't want to stray from them, new socks will have to work as blisters are not cool. Lastly, as of the start of the Mailbox climb I was on my own and I'm not usually good at pushing myself, that was another breakthrough for me.

How much longer will it take me to run another 20 miles? I have NO idea. The Mt Hood course is supposed to be mostly shaded and there won't be any monster climbs like we did today so here's hoping it won't be much more than two additional hours. I think I can fathom two more hours, longer than that and it seems kind of incomprehensible. I will need to go in ready to 'enjoy the journey' as they say.

Thanks to Martin for organizing this! And to everyone else who was so nice and encouraging out on the trail.