Just like that Martin goes for his longest and hardest trail run since his ankle injury.

ASIDE - I should probably start shutting up about my ankle now as it appears to have healed up to at least 80%. There is still some swelling and weakness but if it can handle the descent down the Teneriffe road at speed it's well on it's way to coming good.

What's my recipe for success you ask? One part time off, two parts gradual recovery, a little lot less obsession with pace, one brilliant day and some super company. Done. Was it easy? Uh... no. This was one tough run, as evidenced by this after shot. Note hands on knees. 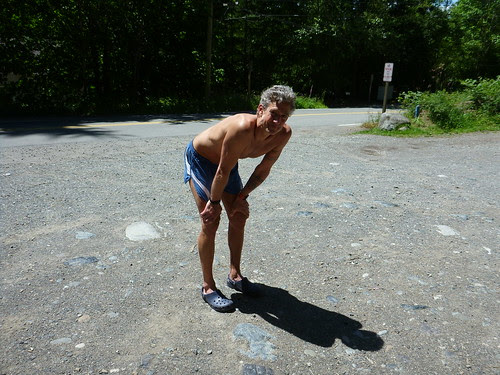 I met up with Edgardo Balansay and Bryan Estes for what promised to be a day or vertical gain. The goal was to run up the Mt Teneriffe road (because that way is longer than the trail), bag the summit, cross over to Mt Si, go down and back up the Mt Si trail, cross back over and finally descend the Mt Teneriffe road. Figure on about 24 miles and five hours. Which is pretty much exactly how long it took us.

I broke out my new race vest for this run to see how it feels, to be able to carry a camera and because it was going to be warm and I wanted the water. What do both Bryan and Edgardo show up with? One bottle each! 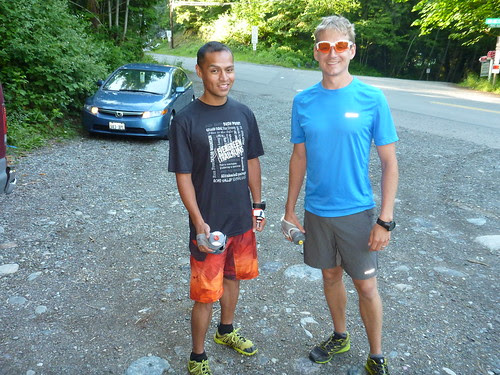 From the car the road climbs gradually for about 1.5 miles and then it's UP. The pitch is pretty darn unrelenting and you just need to find your pace and not exceed it. It appears Bryan's pace was slightly faster than I could go because I lasted all of 42 minutes before I was walking. The first time. Before I got dropped I tried my best to keep Bryan talking (and correspondingly out of breath) per this video but it was to no avail.

The key is to never ask yes or no questions, you want long, elaborate answers.

Surprisingly (to me anyway), before Bryan dropped me we both dropped Edgardo. That guy usually hands me my ass on anything that goes up but I guess he was just getting warmed up. There was some talk of beers last night...

I spent a good deal of time alone on this climb. For a while I kept Bryan in sight but this road just keeps going and going and going... Near the top there was a cool section where it flattened out and where the trees had provided enough shade that not all the snow was melted.

If you have to run on a road it might as well be this scenic.

When you get to about 4,100' you turn off the road and hit the trail. This was one of the most fun sections of the day and on any trail I have been on in recent history for that matter.

After that you are soon on what is nothing more than a crazy scramble to the summit where you are grabbing trees and anything else that will prevent you from sliding down the mountain. Even today on a 'dry' day the ground was covered in a layer of wet pine needles which were in turn on top of a layer of soft, loose soil. Good times. We got our summit shots and climbed and then ran back down. Of course I dorked it up and somehow and did not press play while attempting my spectacular summit video that had me cresting and then taking in the panoramic view... I suck. But the run down that awesome section of trail did NOT suck. What a freaking blast!

I need a hands free camera!

From here it was back down the road just a bit to the crossover. This is a one-mile section of what used to be a road but is now mostly singletrack and it dumps you out right at the base of the Mt Si haystack. And from here? Well now it's down the mountain you go...

By this time the trail was crammed with hikers (and a couple of trail runners!) and Bryan didn't hold back that much so in short order we were flying along. Bryan did a really good job of skirting walkers by going around the other side of trees, slowing just a bit or skying over stumps and rocks. One of these moves was positively Killian Jornet. I was keeping up and a little later I tried the same thing but almost caught my toe on the stump I was trying to jump over and came this close to biting it big time. The people I passed even gasped. One word: adrenaline!

Near the bottom Bryan did pull away from me a little. My legs felt okay but I was scaring myself every time I would accelerate to catch up after being held up by traffic so decided to cool it just a little.

At the bottom we drank water, topped off our bottles and without much to do headed back up. Note look of slight apprehension. 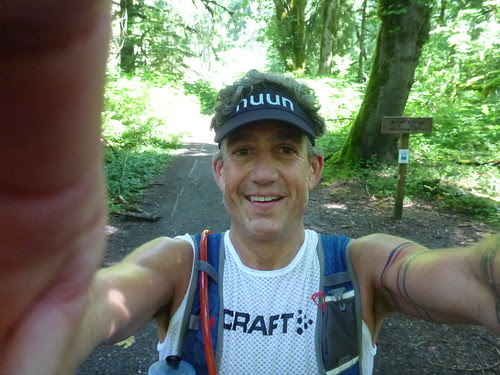 This time Edgardo was sticking with Bryan and I got dropped pronto. Sigh. At least I was running all the sections of trail with no stairs down here so decided to be happy with that and just kept plugging away. As it turns out, Bryan dropped Edgardo soon after and I slowly caught up to Edgardo. It was nice to have company! By the time we got most of the way up I was walking more than just the stairs.

I had the presence of mind to ask Edgardo to film me for a change so here is proof that I was near the Si summit.

Yes! 99% of the climbing was now done so it was 'summit' shot time. 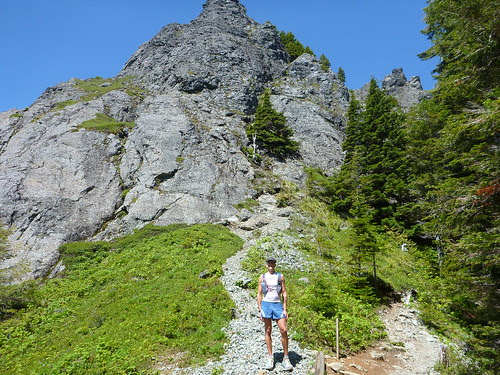 On the last climb of the crossover I finally heard Bryan express some acknowledgement of the effort.

Then we hit the road. And boy did we hit it hard! The steep part of the descent is fully four miles long and we pretty much let it rip. For a while I was right with Bryan and we even talked some. My eyes were GLUED to the road because I was pretty freaked out about making a misstep and torching my ankle but thankfully nothing like that happened. We would run around switchbacks and one time Bryan was on the inside and pull ahead and then the next time I was on the inside and would catch up. Fun!

But then the pounding started to get to me. At some point my quads were no longer feeling ultra stable and so I had to slow down. Bryan eased out of sight and for what was probably the last mile of the steep section I took it easy.

I had hoped that when the road flattened out I would be able to pick it up and run it in at a good clip but no such luck! My legs were totally hammered. Instead of speeding up I slowed down even more. And then I was walking! Yikes... I felt a bit like a rag doll and my hips were not doing such a good job of keeping me level as I proceeded down the road in what must have looked like a drunken shuffle.

I did run it in but my pace was around 8:00 and I had to walk a couple of more times just for a few seconds. Wow.

As I neared the finish I pulled out my camera to document the last few seconds and it promptly flew out of my hand and smashed into the ground. Thank goodness I got a water resistant, shock resistant camera! it survived unscathed.

On the descent we had dropped Edgardo pretty quick and so now Bryan and I waited. Then we had our recovery drink. Then we changed our clothes. Still no Edgardo. Then I checked my phone and saw that I had missed THREE calls. Sorry Edgardo... :( I called him back and he was still a ways up the road. Walking. Ouch. After thinking about what would be the best course of action I finally grabbed two bottles - one more for me and one with calories for Edgardo - and headed back up the road to meet him.

And soon there he was. Running! With a smile on his face! What a goddamn trooper. This guy is tough as nails. Big, iron spikes. A whole bucket full.

So we did it! No one got hurt, no one even fell down and we all finished safely without even bonking or getting dehydrated. And now Edgardo and I have a better understanding of what a 'real' trail run involves. That's a powerful lesson.

It was super to be able to finish this. I have been adding a bit of mileage and difficulty every week and hope to step it up one more time next weekend before I toe the line at the Mt. Hood 50-Mile race. As long as I get sufficient recovery after today and after next weekend I am guardedly optimistic about my chances of finishing. Which is my only goal at this point. Anything else is total gravy.

Thanks Bryan! Thanks Edgardo! Today was awesomely hard but still awesome.