Like a lot of my teammates I did not get outside to ride yesterday as that is when the snow started falling in earnest here in Seattle.

Luckily one of our sponsors is Cycle University and they have a first-rate training facility.

I met Ryan D and Dean J and we did two 60-minute workouts. Nice.

And by nice I of course mean hard! I think this is the first time I have bonked on the trainer.

Starting this early in the morning there is a limit to how much food I can eat prior to the ride and I should have known better and brought some snacks or something more substantial in my bottle. Live and learn.

Here is our first workout. 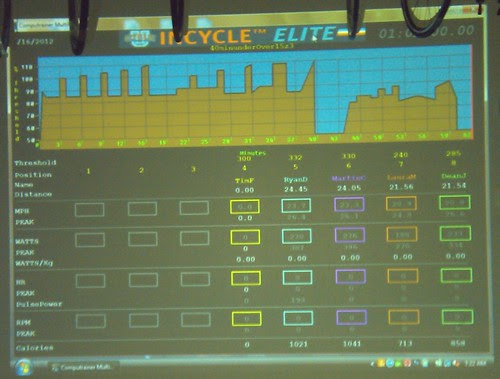 As you can see I started with my threshold power set to 330 watts for the first(?) time and managed to hang on. Yes. That second-to-last two-minute interval is a bitch. Truth be told, I had to quit pedaling for a couple of seconds just before that interval, you can see the dip in my power file below.

And here is the second workout. 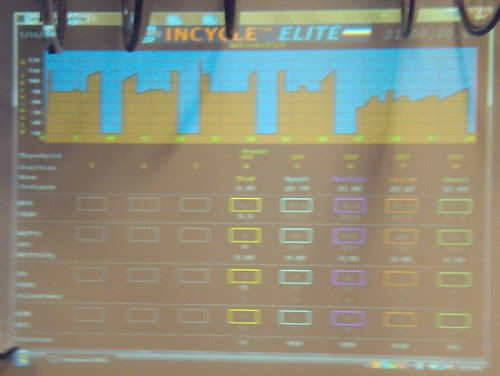 I tried to ride this at 330 watts too but that dream only lasted about 120 seconds and after that first spike I caved and dropped the threshold power setting to 320 pronto. Holy crap did my legs feel burnt.

I slowly managed to pull it back together but you can see from the power file below that I quit pedaling three times for a couple of seconds each time just to catch my breath. Also, my legs were DYING.

About half way through this second workout I realized I was running out of calories but what can you do? It was one of those rides where you just meter your output and try to survive. Ryan was Mr. Steady and just did not waver - way to go.

After this was all said and done I RAN home and ate food. Bonking is not a good feeling.

After shoving food in face Shelley and I decided to hit the mountains for a walk in the snow! It was absolutely gorgeous out and the snow that was falling was so dry you never needed any rain gear. I like that. Unfortunately Shelley had her heart set on snowshoeing and the place I took her ended up being just a hike in the snow and we never needed our snowshoes so after a bit we turned around. My bad. On our way back to the car we passed a family that must have been determined to wear their snowshoes at all costs and man were they moving slow… tennis shoes would have been better than snowshoes. Too bad I forgot my camera!