Good friends are good to have.

Seattle schools were shut down, the UW was shut down, Metro buses were running on emergency snow schedules; hell, even Cycle University was officially shut down. But we still showed up and trained. 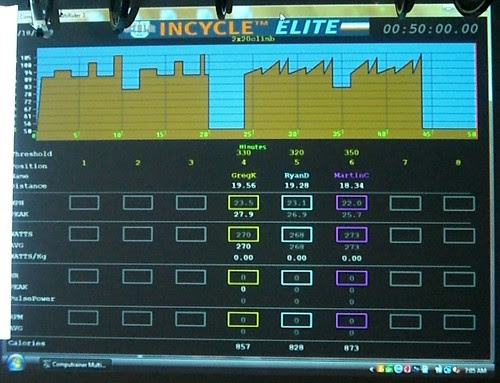 With more than a small amount of trepidation I selected 320 watts as my threshold power this morning. Yesterday was tough and the day before that even tougher so I was not at all sure what I was capable of. Luckily I guessed right.

Half way into the first interval I was feeling like I could finish it and by the end I had made up my mind to up the threshold setting a tad for the second interval so I started that at 330.

Half way into the second interval I upped the threshold power setting to 340 and with three minutes left I upped it again to 350. Ouch.

Joining me today were Greg K and Ryan D. Greg put on a fantastic snowboard movie and for a bit I was able to watch it and sort of enjoy it. But… somewhere around five minutes into the second interval I had to focus and once I upped my power setting to 340 I did not look at the screen so much. :) Still, amazing footage.

Greg had ben off the bike for a week skiing and did really well! And Ryan was Mr. Consistent as usual and never looked like he was in distress. Nice.

Training may have been smart but I drove the van to Cycle U. Dumb. Once on the way down I pitched it sideways and then with an extra inch of snow on the ground for the drive home I did it again two more times. Exciting stuff. At least the streets were empty.