Another first (as in a new activity) for Martin. Yes.

Today I participated in the second event in the Fort Steilacoom Off-Road Duathlon series put on by 4th Dimension Racing (that also happens to promote the most excellent NW Epic Series in the summer). The long course (the short version included a 6 mile bike leg) consisted of 5 km run, 15 mile bike, 5 km run. 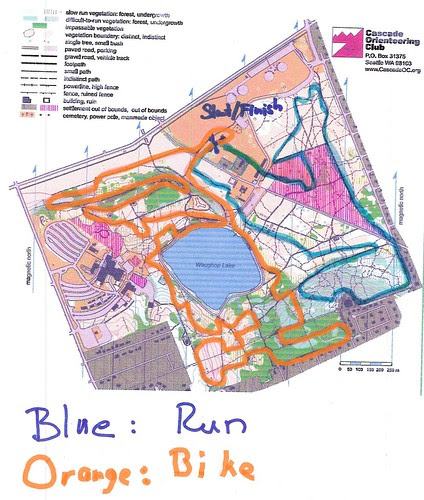 The atmosphere was pretty relaxed. I showed up plenty early, hit the head, checked in, got my number, got the low down on how the transition area worked, hit the head again and then went back to the van to change and warm up.

I hopped on my bike - which I had not ridden since that one time many months ago when I realized my mountain biking injuries would prevent me from riding any cyclocross - to make sure it still shifted and stopped and figured one more trip to the bathroom was in order. Then I dropped my stuff (bike, cycling shoes, helmet, water bottle, gel) off at the transition area and put on my running shoes.

I went for something like a 1-mile jog to warm up, did some minimal stretching and then at about 20 minutes before the start decided I better hit the head yet again (am I an old man or what…?!) and finally went to the van to ditch the jacket and walked over to the start for the athlete's meeting. 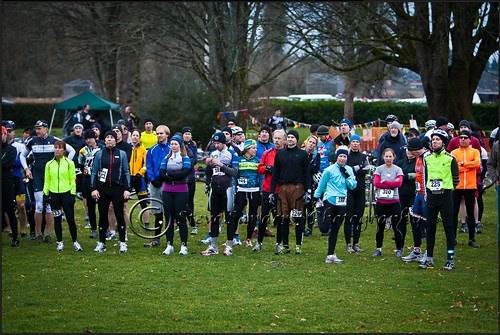 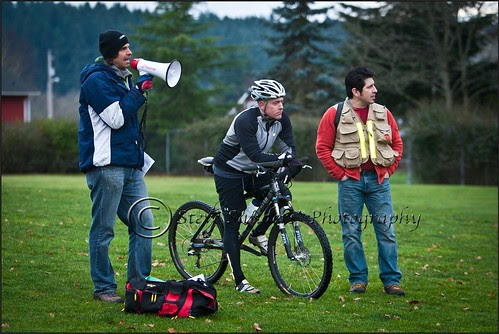 Right away there were people ahead of me on the run and right away I was sucking wind. I don't have a great sense of pace while running and so was totally guessing at how fast I should go. I knew I needed to run faster than I normally do but not so fast that I would blow before I even finished the first leg of the race. After about one mile I was breathing pretty hard but figured I could maintain what I was doing so decided to hang on. Luckily I did hang on. After things got sorted out on the run, about three people were still able to reel me in and run by me. Oh well. 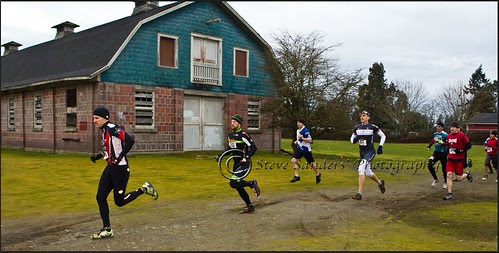 I did okay at the transition except I forgot to hit the lap button my Garmin watch. I'm still not sure what the best way to record data for a duathlon is… maybe I should read the manual? :) I think this thing has a running mode and a cycling mode but not having researched that the last thing I wanted to do at the transition was figure it out so I just didn't touch it and carried on.

The bike leg was pretty fun. About half of it was exactly the same as the cyclocross course that is run here so lots of the climbs, turns and descents were familiar.

That first lap on the bike felt really long. Funny how your perspective changes when you are racing. As I started lap two I somehow threw my chain off on the very first climb shifting from the big ring to the small ring up front. Damn. I had some speed so tried in vain to shift it back on while still moving but then I had to stop, get off and put it on by hand. Just as I got it on Michael B passed me. Shoot. 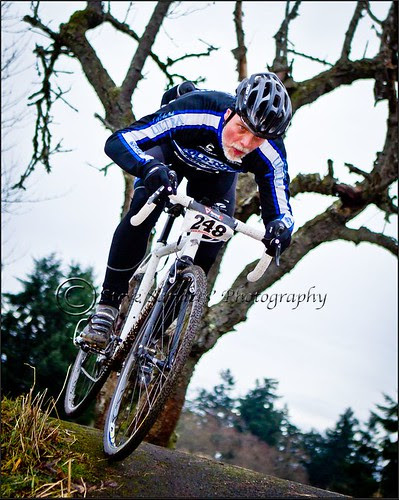 I was pretty certain Michael was going to do better than me on the bike leg so I was thrilled to have a lead heading into it. To squander it so quickly was a bummer. :)

I was able to get moving quickly and caught up to him and managed to hang onto his rear wheel for one lap but then inevitably and inexorably Michael rode away from me and all I could do was watch until he was out of sight. At some point during that second lap one other guy passed me and I was able to cling to his rear wheel until the last lap when I faded and got hung up in traffic.

There is a real art to maneuvering through lapped riders. You need to anticipate spots on the course where you can pass and frequently you need to dig a little deeper than you might otherwise go to pass them before a descent or a tight corner so you don't get hung up. I learned this but perhaps not fast enough.

ANOTHER ASIDE - some people in this race were funny. There was a pretty big recreational contingent ('cuz you know, I am SO serious about sports…) and at times you simply could not predict how they would act. One time I was approaching a woman from behind and yelled out, "Passing on your left!" and she did the classic move to the left. Another time we were on a very narrow trail and I yelled the same thing and this woman did absolutely nothing. No one was going to prevent her from achieving a PR I guess. As you approach the start/finish/transition you have to ride down two steps. It was cake if you had speed, you could just lift the front wheel and air it out. The second-to-last time I was approaching the steps it looked like I was going to hit them at exactly the same time as this other guy who was going much slower than me and I yelled out, "Let me by on your left!" and he slowed down, moved left and yelled back, "Watch out for these steps, they're really tricky!" Thanks buddy, by making me slow to a crawl you did indeed make them really tricky for me. Oh well, he probably thought he was doing me a favor. But seriously, after four laps wouldn't he think that I had been down these steps at least once already? Whatever. 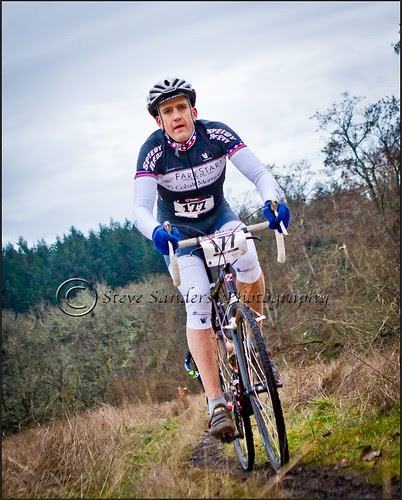 I hit the transition for the second time and tried to make sure I tied my running shoes nice and tight so they wouldn't come undone during my second run and expose my newb status. I had worn my cycling cap and gloves during the first run but this time ditched them both as I was plenty warm. I probably could have ditched my arm warmers too but only so many thing can go through your mind in the seconds you have. So off I went.

Ow… right away I could tell this was going to be a slower run. Still, I somehow managed a slightly faster transition than the guy who had ridden away from me in that last lap and so I tried to focus on being efficient and set out to see if I could bring him back.

About one mile into the run I heard footsteps behind me and in the matter of a very few seconds this guy glides by me. We exchanged pleasantries.

And then he pulled away easy as pie. And in short order he caught and passed the guy in front of me that I was trying to catch. At this point it became pretty evident that I was not toing to catch anybody so I shifted into cruise control and probably slowed just a bit. After a few furtive glances behind me it seemed like a safe option as there was nothing back there.

With maybe .3 miles to go I struggled some but then the I could smell the barn and was able to finish. Whew.

As I crossed the line Roger M (the promoter) congratulated me and joked that this kind of event was a far cry from the long MTB races I did last summer. He's right.

If my Garmin data is correct I ran sub 6:30 miles during the first running leg and still managed to run about 7:00 miles during the second. I'm really happy with that because it felt like I was going MUCH slower. If you look at my heart rate which does this steady decline throughout the entire race it's probably a sign of 1) I'm not so fit, 2) I did not pace myself so well and 3) I'm coming off of three hard days. Then again, it felt at times on the bike (NOT on the runs…) that I could perhaps go harder if I had more motivation/focus. This race was basically a TT with lots of obstacles that required strategy in dispensing your effort thrown in.

All in all pretty fun and I would do it again. Two activities in one day is a great workout of nothing else. Oh yeah, I guess Michael had three minutes on my going into the last run and beat me by one minute. That's more motivation to come back too. :)