Jones Road, May Valley, Magnolia on a single speed

Just Tim F and me today. Which was kind of nice.

Man, after yesterday my legs were TRASHED. I rode down to Leschi to meet Tim and from the first pedal stroke as we pulled out of there I felt like utter dog doo. Heavy? Yes. Slow? Yes. Tired? Yes. Still chock full of lactic acid? Yes. Sweet, let's do this.

There was just the slightest headwind as we headed south on Lake WA Blvd and then on Rainier but you could not see the trees or grass move much; I mentioned it felt kinda significant when we reached Renton and Tim concurred. That made me feel a little better.

The goal for Tim was to ride four hours. The goal for me was to get my legs turning circles again and if I could last that long it was a bonus. On purpose I picked a flat route thinking I had my share of hills yesterday and it was probably a good thing. As we turned left onto Cedar Grove (a tiny hill really) my quads were singing. SINGING I tell you.

After about 1.5 or two hours it did get better but by then I was already getting tired from the ride! :( My speed was pretty much limited to 18-19 mph most of the time because I was 1) wasted and 2) was on my single speed. At least it made conversation easy.

On our way west on May Valley we saw several bunches of riders, it's always great to see folks out. At least two of the groups were recreational riders too! Nice.

As we got close to Mercer Island we realized neither of wanted to loop that yet again so I proposed we loop the Magnolia bluff instead. This was a huge hit with Tim so off we went.

Our only mishap was while crossing the I-90 floating bridge where Tim got a flat. 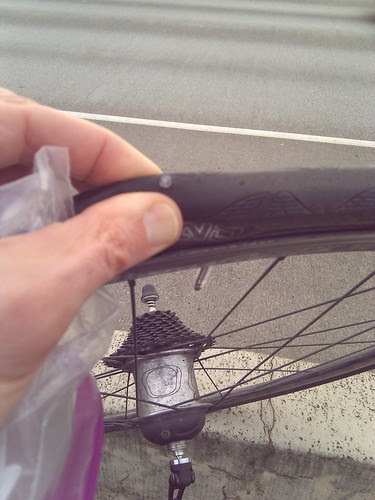 On the way to Magnolia I was shown a section or bike path that I have never been on… it runs along eh south side of the ship canal from the Fremont Bridge all the way under the Ballard Bridge. Very cool and not very well known it seems. You ride behind Foss Marine and it's got a cool, warehousey kind of feel.

The climb up through Discovery Park was brutal. I had to stand all the way and it hurt. But once up on the bluff and circling Magnolia I got the inside scoop on loads of houses estates up here from Tim. One is right on the bluff and the ground floor is one big indoor swimming pool! Holy crap, what a view you must have from that pool as you hanging right over Puget Sound and can see the Olympics, everything really.

We finished off the ride with a bit of urban riding through Myrtle Edwards Park and then up Pine. Yep, climbing Pine was also hard.

But I made it! And my legs did feel marginally better at the end than when I started. Whew. Thanks for the company Tim!

Will I ever get off this dumb bike and ride something with gears? I've stopped asking myself.

Oh yeah, by the end I was able to take my vest and inner pair of gloves off. Nice.