Ah, indoor trainer; how do I love thee? Let me count the ways…

Yep, I couldn't think of any either.

I woke up today and although the temperature was over 40 degrees, there was still a lot of snow on the side streets on top of Capitol Hill so I figured one more day of indoor riding would be the judicious/safe option and would not kill me. That was the theory anyway.

Since Cycle University was booked this morning today we headed over to Seattle Multisport.

I was going to meet a couple of teammates for two hours at 10 AM and for some reason I decided that getting in an extra hour was a good thing so I headed over at 9. I'm pretty sure this kind of genius is genetic and can't be taught.

Here is my first 50 minute workout. Those peaks are at 105% of threshold. 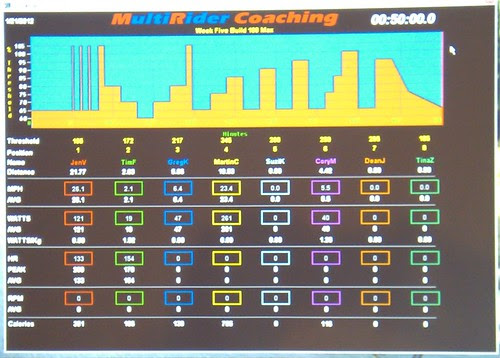 It was just me and this woman and all I had was Salt on the DVD player for motivation but I did okay. It seems that the last time I was at Seattle Multisport about 11 months ago I was feeling pretty spry as my threshold was set to 345 watts. Being male and having an ego I did not dial it down. Oof… Thank goodness for that warm-up.

With about 10 minutes to go in this workout Greg K, Tim F and Corrie M showed up and announced that a skills clinic we were planning on attending at 1:00 PM had been cancelled because of the road conditions and so Greg was planning on riding for three hours. Oops.

Not only is it not smart to head out of the blocks this hard when you are looking at four hours of work, four hours was going to be an all time record on a trainer for me if I stuck it out. Funny how when you get yourself all psyched up for three(!) hours and someone suddenly informs you it will be four you feel kind of small.

Here is my second 50 minute workout. These peaks were only at 90% of threshold. 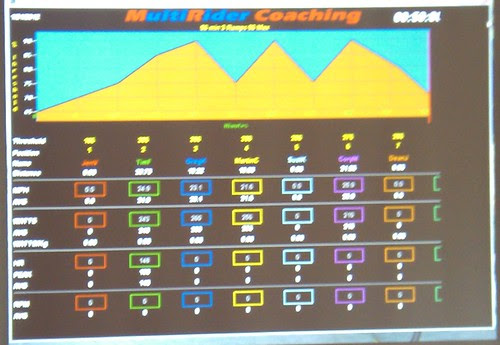 This was intended to be a 'warm-up' for everyone else so I played along and dropped my threshold setting down to 330 watts. By the end of this session I felt pretty warmed up tired. 10 minute hills are hard!

Since this was going to be the mammoth trainer session I brought along not just drink but also food. And I was eating while riding! I figured I had to… and in retrospect it saved my bacon.

Here is my third 52 minute workout. These peaks are at 86% of threshold. 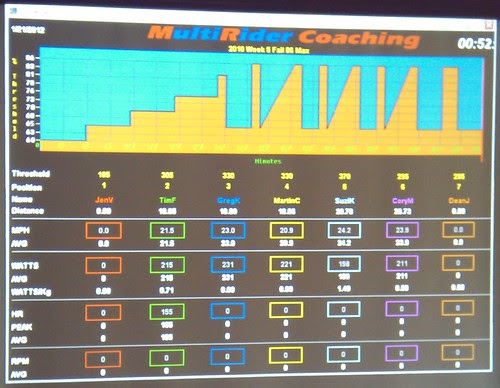 With some apprehension I kept my threshold set to 330 watts. This was surprisingly hard but also super quality and except for stopping pedaling three(?) times for about 3-4 seconds each time I made it to the finish. Whew.

A few minutes into this workout Lane S showed up. Nice.

After the resistance was gone I ate the last of my food, started my third bottle and felt like I was going to cramp the next time I swung my leg over the saddle. Yikes!

Why sure, let's do another. Here is my fourth 60 minute workout. These last three peaks are at 115% of threshold and the hardest three-minute interval is 105%. :( 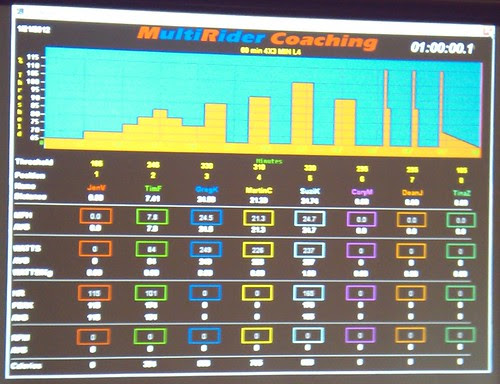 Oh yes, the wheels came off. Big time. I'm no superman and will readily admit this was a bit ambitious for me but hey, you gotta try sometimes.

Corrie packed it in before we even started this one. No shame in that though. And about 10 minutes in Tim also hit the wall. I feel you Tim.

The next two intervals were just 60 seconds long. Anyone can go hard for 60 seconds, right? Right… Those first 30 seconds are at 115%. Killer! But the next 30 are at 90%. Actually even more killer! I made it thankfully and by this time I got a second (fourth?) wind just knowing it was all going to end soon and so for that last 30-second interval I increased my cadence before the thing started (Lane's advice) and sort of 'floated' through it.

God did it feel good to be done.

I did not cramp getting off the bike but I came close. And I had drained my third bottle. Man you sweat a lot on these darn trainers.

I tried hard to keep my speed between 20-25 mph the entire time. I have found that if you go faster than 27 the resistance drops off and if you slow to less than 20 it can get excruciatingly hard. Mostly I was around 22-23 until the end where I dropped off to 20-21.

After we all told each other how hard that workout was three or four times Greg, Lane and I went across the street to Uneeda Burger and had some quality recovery food. Then I went home, took a loooong shower and did nothing else.