Fresh? Not so much. But that's okay, this has been a solid week and I'm good with that. Even so, my performance was not shabby.

There were only five us at Cycle University this morning but it was almost all of the stalwarts. As has been my habit lately, I setup camp next to Ryan D for motivation. As Martha used to say, "It's a good thing." And it keeps me honest. 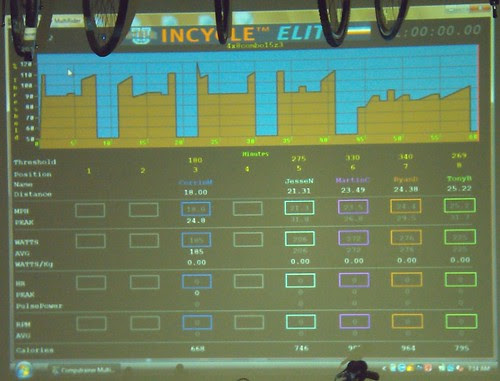 Ryan and I both started this workout at a threshold setting of 330 watts and it just about killed me. I was so not warmed up and seriously struggling to keep my speed up. In a word - ouch! That first three-minute recovery was a godsend.

If you look at the PowerTap data below you can see that my speed and cadence increased ever so slightly as the workout progressed. This is because I warmed up and finally got my legs back under me. I also shifted up one cog in the back as I was seriously struggling with maintaining the speed during that first interval and I have found that 21-25 mph is the sweet spot. Slower and it's artificially hard, faster and it gets too easy.

At some point Ryan upped his threshold power setting to 340 watts. I was unable to match that raise today; good for him! Up until this point his average watts were just one more than mine but then he slowly pulled away and finished with four more than me. And with his lighter body weight he of course killed my watts/kg. :) It's all about what you can find to motivate you isn't it? Oh yes.

I was hoping to get in a core workout today as well but my schedule did not accommodate my fitness goals.