I am hating not being able to run. And just three years ago I hated to run. Ironic? Karmic? Hopefully not the later.

On the other hand, I got featured in the press. 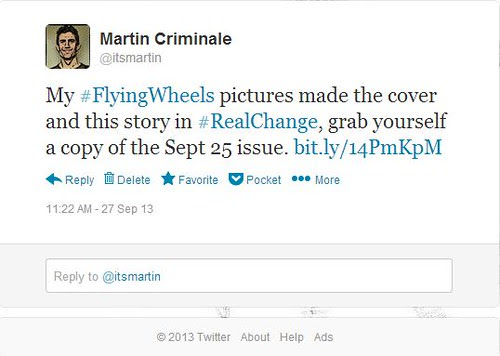 I thought about going to the gym but core has lost it's appeal for this week so since we have a treadmill at home and since I wanted to see how my knee is holding up I got on that instead. I did what I usually do which is bump up the incline to 1% (just because that makes me feel like it's more of a 'quality' workout than running on the flat) and set the pace at 7:30 and ran.

It felt fine. For 20 minutes. Then I could feel my left knee just a little... It didn't get any worse so I finished the run (I had only planned for 30 minutes anyway) and rode to work.

It was dripping from the sky on my ride, just a tiny bit on the way to the clinic.

ASIDE - I got a MRI on my left knee today in hopes of figuring exactly what is going on so I can stop guessing and get a definitive treatment plan.

The rain came down just a bit harder when I left the clinic and rode to work. It was my first ride in the rain in a long time. I have become a fair weather cyclist for sure.

As I left the clinic I bought a copy of Real Change. Turns out this paper used some of my pictures from the Flying Wheels Summer Century in an article about how cyclists peeing in public is affecting the homeless. My friend John Phillips and I did this ride and he got featured on the cover of the paper. Hopefully no one thinks that we were doing the urinating...

I used my Garmin Fenix in 'indoor' mode for the first time and it worked pretty well. Looks like I need to calibrate my foot pod a little better but it was cool to have some data from a treadmill run. Nice to see that my cadence is above 85 at least and interesting how my heart rate spikes at the beginning of almost any/every effort and then settles down.

The splits are not correct as I only ran four miles according to the treadmill.