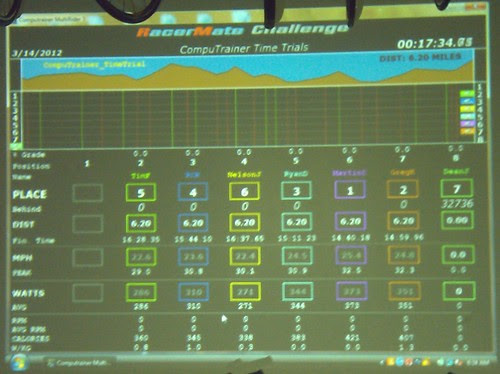 In hindsight, this TT was sort of like an 'opener', just a bit longer and harder than I would normally do. Okay, a lot longer and harder. :) All I'm trying to say is I don't think I overdid it. I actually had a tiny bit 'left in the tank' as they say and had anyone been right on my ass or right in front of me I think I could have eeked out a slightly faster time.

Even so, I think that I posted my fastest time EVER for this course today with my previous best being (I believe) 14:45 or thereabouts. Hooray for me. Obviously this show-up-well-rested concept has some merit.

We practically had a full house today with just one trainer empty. Ryan D was kind enough to start us off and since I had a running start and he did not I was out in front at the beginning. But I gotta say, it seemed like just seconds went by before Ryan was only 100 (feet? meters? I'm honestly not sure what the CompuTrainer unity of distance is…) behind me. Nice job!

In spite of the easy spinning up front this effort is always a shock to the system and it took me perhaps 3-5 minutes to feel like I was in race pace mode. In the beginning your body is just playing catch-up with what your brain is telling it to do. :(

I watched my watts and any time they went over 400 I would shift to an easier gear in hopes of not blowing up and it worked. I also recall using the 53x12 at least twice (three times?) and saw that my watts did not fall off so much on the descents which means I was doing a good job of pushing through and not easing up when the climb was over.

I was able to blow my nose once during the TT and take one drink so I must not have been so totally maxed out. Both were required as my nose was running and my mouth was getting super dry from my panting and the fan pointed right at my face. I wanted it that way mind you, it just dries you out.

Greg K put in a great slow surge to finish really strong and everyone else looked super steady although I must admit my attention was diverted… After we finished the effort I spun and that cool down felt like exactly what I needed to not get that my-legs-are-full-of-lead feeling all day long at the office.

And here is my PowerTap data. I noted the following things.

I managed to get in a quick core session at lunch, no stretching or sauna like I wanted but work is super busy right now. Walking back and forth from the IMA my legs felt fine so I am starting to get excited about Saturday! [massive understatement]

Thank you Cycle University for providing this great facility!