The rest of my team was either racing or going on a hard/hilly training ride today so I struck out solo. Yesterday was a fairly (read: very!) fast run for me and I did not want to obliterate myself this weekend in hopes of getting in another shorter fast run later in the week, in order to do that I needed to stay pretty fresh.

On the technology front I just spoiled myself with the purchase of an iPod Shuffle. 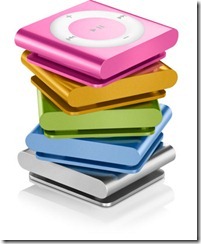 MP3 players really are the bomb. I mean, who doesn't have one? I thought so.

I seem to be hard on mine or I just have bad luck. My original iPod Nano died ages ago, my replacement only puts out sound via the left channel and my newest one suddenly only plays songs a super low volume. Yes, I have tried selecting my entire music collection and restoring the volume level but no dice. So I splurged, spent the $50 and got one of these. Talk about portable… I love it.

Armed with music on the bike again (finally!) I headed out.

It was cold and windy and rain was forecast for later but I had music! Yes.

Earlier in the day I had considered joining teammate Greg K for some hill repeats. After five miles I realized it was a good thing I didn't. I wasn't beat but if I had chased Greg up Squak Mt a few times I would have been. And it would have been hard to recover fully from that. Another lesson learned.

So today turned into one of those blissful rides where I could go whatever speed I wanted. Nice.

On my way south I caught two racers climbing up from Seward and then slowly rode away from the going down Rainier. At the airport I had to stop to put on my raincoat for a squall and then riding past Gene Coulon Park I stopped to take it off again as the sun was coming out. One of the racers passed me as I was just getting rolling again and then the next couple of miles were kind of funny.

I was wearing my Seattle Randonneurs wind vest and non-descript clothes besides and this guy kept looking back to see where I was. And then he would accelerate just a little. Since the pace was not stressful I would match his acceleration but stay about 50' behind him. This went on until we crossed I-405 and I turned left to continue north and he slowed way down to rest up for the McDonald's hill. It kind of made my day. :)

My music mix was really working for me today! I love it when I pick the right songs.

A little but further up the road I passed Nikos M going the other direction. Even in my disguise and on my rain bike he recognized me and waved.

The rest of my ride was extremely enjoyable. I ate, I drank, I listened to music and then when I got back to the UW I decided to take a short detour past Wrench Bicycle Workshop to check it out. Of course it was closed. Rats. I will need to swing by there again.

In the end it warmed up enough for me to pull my liners out of my gloves. Gotta like that. And besides that super short dumping in Renton it was dry all day long. And because of Daylight Saving Time, it was light when I finished! YES.