If at first you don't succeed - and all your teammates are showing up to the race - try, try again.

Yesterday bit the big salami as they say. Common sense dictates I should perhaps go for an active recovery ride or at most an endurance ride. Or I could say forget that, I'm going racing. 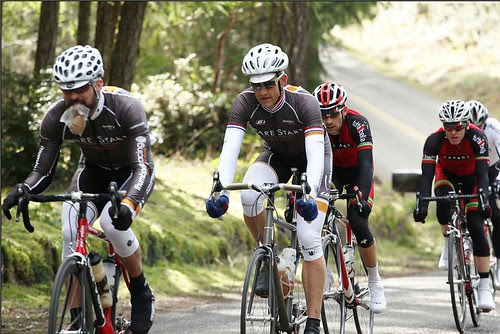 Ryan D and Greg K showed up at my house, we piled into the van and then drove to grab Dave H. Just like the good old days (read: 2011).

The forecast was for sun and 55 freaking degrees! I almost did not pack my vest, shoe covers, you name it. Luckily common sense prevailed and I took my fully stocked race bag. About five miles from the course it started to mist and for the first two laps we got drizzled on. Hello Meteorologists, time to up your game!

It was great to see everyone! Garage Racing has a good looking new kit (it's more Golazo colored this year) and we got THREE unsolicited compliments on our kit. Thanks, I like it too. There were so many shiny, light, new bikes… made mine look like a real POS. It is still sporting the dirty, torn handlebar tape from last summer and with the small diameter tubes it looks positively old school next to all this uber carbon. To add to the ferrous party, I was even rolling my aluminum training wheels so that I could use my PowerTap.

With four of us in the race the plan was to get two in every move and every counter-move. Garage had the dominating numbers (plus they are all great riders!) so they were the team to watch.

Surprisingly no attack was launched the instant we turned right on the main road at the end of the neutral roll-out. But it did not take long, soon riders were probing the wind and launching themselves off the front. Greg went with one move, Dave with at least two more, I think Ryan covered one as did I.

Just before the second turn/half way through the first lap Greg got away with Sean P from Garage. It sounds like Sean is riding strong this year (truth be told, he has been getting stronger every year…) and I was thinking, "Two in every move!" so as we approached the turn I simply did not grab my brakes and rolled around the outside with a little more speed than everyone else and then punched it. My first race effort of the year!

I clicked up the gears and kept the pressure on and after a bit looked back and saw Nikos M chasing me with Bob L (Audi) and some other Audi guy in tow. So I didn't get away without another Garage rider but two vs. two is better than one vs. one so I was happy. Sean and Greg kept driving delaying our juncture for longer than I thought was necessary but we connected soon enough and then it was time to work. By this time the other Audi guy was already gone, he did not survive the bridge to the leaders.

For the next two laps four of us pulled really well. Bob was not able to contribute and I was not sure how long I was going to last but after completing two laps we had about a two minute gap and we were doing a good job of rotating smoothly so I was optimistic of staying away. Then all of a sudden I got to the front and my legs faded big time. Oops… About this time Greg turned to me and asked how I was doing. I said something to the affect of perhaps not lasting all the way to the finish and he encouraged me to do whatever it took to hang in.

I won't belabor the fact that running is no good for cycling or that I have not ridden outdoors much this winter or that I exhausted myself yesterday. Oh wait… looks like I just did. Hahaha, just kidding. :)

The only thing worse than blowing up in a race is a self-imposed blow-up such as riding yourself out of the break so I started skipping pulls. For the next 2.5 laps I would pull through when I could but mostly I was sucking wheel. So now it was three people towing two of us around the course.

ASIDE - I could not help noticing that some experienced racers still have a lot to learn and I'm not even that experienced. Just little things like always pulling off to the outside of the turn or into the wind or shortening the course whenever possible, etc. Nothing against Greg or Sean or Nikos to be sure, it's just some small ways to make the break even more efficient. Every once in a while those precious few seconds can make a huge difference.

At some point during this tow around Mason Lake I mentioned to someone that if I was still there at the end I would be happy to lead out the sprint. Note to self, shut up next time.

The last half of the last lap I did nothing but sit on the back. :( Greg surged a couple of times, just to see if anyone was perhaps on the edge but the answer was a resounding NO and as we hit 1 km to go we were still all together.

At this point I felt I had to make good on my earlier promise so obliged by coming to the front and upping the tempo. I think it took Sean by surprise but I was not 'attacking' and waved him on my wheel so I think that is how we rounded the last corner; me, Sean, Greg, Nikos and Bob. I felt fine going over that first hump just before the finish but the second/last hump drained my legs and as we rounded the final corner and hit 200 m to go I was worthless. I shifted up to a bigger gear… and went nowhere. I was promptly passed by everyone in the break.

Congratulations to Garage, Sean won and Nikos edged out Greg. I heard Greg missed a shift but I'm not taking anything away from Nikos, he is hard to beat.

In hindsight the smart thing to do would have been to let Garage lead it out. Greg and I should have each taken one wheel and then at least we would have had a draft until 100 m to go which I think is the ideal time to stick your nose in the wind at Mason Lake. Oh well.

About half way through the race the precipitation stopped and I took off my vest, that was nice.

It's going to be a fast season.