Today is my last big run prior to my last big trail race. Funny thing, I woke up more than a little nervous about today, I don't even want to think about two weeks from now.

My run was a bit of a disaster. I was tired, running with faster guys and in hindsight probably had a poor attitude so was not able to push myself any. [I obviously did not have the 'Power of Belief' this day.] And I hit the deck three times. Here is what you look like after a slog through the snow on Tiger. 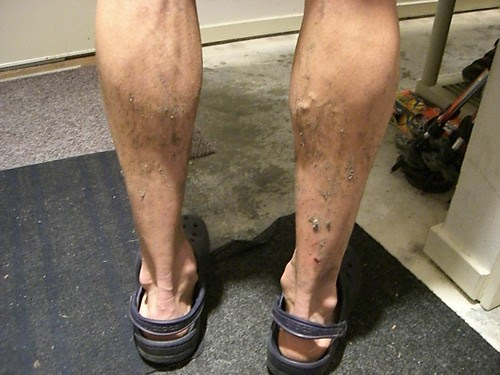 And here are my REALLY, REALLY SEVERE scrapes that I suffered sliding through the snow when I fell down. 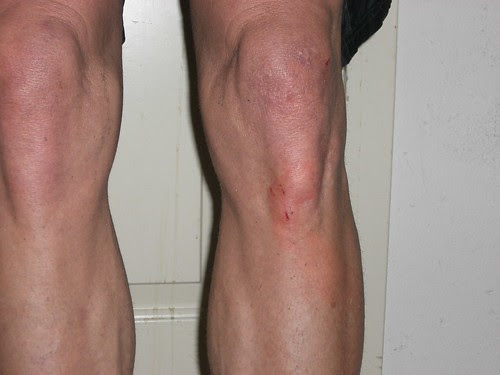 I know! Call 911 already. They did kinda sting.

And yes, there was a TON of snow on the top of Tiger today, I would not have thought so but obviously I have a lot to learn.

I met Bill H and two of his friends (Brian and Brad) at the Issaquah Community center and the plan was to cover roughly 20-25 miles by running the Fat Ass loop and then going under I-90 at the High Point Way exit and turning right so you can run along the new pedestrian/bicycle path to Preston. Then the plan was to turn around, come back on the path and take the dirt road that parallels I-90 all the way back to Issaquah to simulate the last 10 km of the Chuckanut 50 km race. Oh yeah, the plan was to pick up the pace once we hit the trail to Preston.

About one week ago this sounded like the perfect workout. Today it sucked.

I don't think we started out too fast… I was worried with Bill in charge but he was very reasonable and the pace seemed fine. Still, I was breathing quite hard and a couple miles in I found myself walking up the steep sections of trail. Lucky for me Brad started walking soon after and I kept pace with him for about another two miles.

As we got closer to the top of the first climb snow patches started to appear alongside the trail. Then we were running through one inch of slush and before you knew it, that one inch had turned into 4-5" of not so slushy cascade concrete' as we used to call it when I was skiing.

Across the 'flats' the snow was at least 6" deep. And we were getting first tracks. Bill was in front, then came Brian (both chatting away about baseball and spring training), then came Brad - somewhat less chatty - and then came me. Totally silent. Except for my ragged breathing.

I was sliding all over the place all ready. At times it seemed like I would put my foot down and it would squirt out to the side or backwards and it felt like a massive energy suck to maintain forward momentum. Everyone else seemed downright unaffected by the conditions. This is a wet section of trail and just because there was snow on the ground did not mean there wasn't any water underneath the snow. Every so often we were plunging through muddy puddles and all of us would leave brown footprints for the next 30' until our shoes cleaned themselves off again. At first I thought, "Oh shit, my feet are going to FREEZE." but although they got cold, all the effort I was putting out kept them tolerable.

What was not tolerable was the pace and even on this flatish section I began to get tailed off.

As we started the next substantial uphill section Bill, Brian and Brad were practically out of sight. I was getting ready to have a huge pity party for myself [And do what exactly…? I still had to get myself back to the car.] when I remembered that while hiking earlier I had kept up fine. So hike I did. As fast as I could. And wouldn't you know it, slowly, ever so slowly, I started to come back to Brad who was also walking by now. And then I caught him! And then we both hooked up with Bill and Brian who had waited at an intersection. Nice.

My jubilation was cut short however when the slope eased and everyone started running once more. I tried to 'dig deep' as they say but my body (mind?) was having none of it today. In no time I was alternating walking with jogging again and off the back, Crap.

At the summit I caught up with everyone; because they waited. The wind was howling up here and they had hunkered down behind this metal hut to avoid getting hypothermic. As soon as I arrived it was back into the woods and this time we went downhill.

I guess I think that I'm okay at descending. And it's fun. Today I was not doing so well. We were plunge running down through about 6-8" of snow and as long as my foot landed in enough snow my speed was getting checked but every so often I was slipping and not decelerating it felt sketchy. I was actually happy to start climbing again to the second summit.

ASIDE - There were a lot of hikers out today. They were hanging out at both summits and I was struck by how much clothing they had on… Here we were running along in two shirts and shorts with soaking wet feet and we were feeling okay. These people had on their expedition jackets, hats, mittens, you name it. Truth be told, if we had stopped moving we probably would have needed all that too.

We started the main descent and instantly I terrified of landing on my ass, Running scared is no good and if you don't shake it right away the problem becomes circular; you slow down because you are frightened of falling and your slow speed means you have less momentum to make it across slippery sections of trail so you feel even more precarious. Repeat. I was stuck in this cycle and in very short order everyone was out of sight again.

The trail was covered in a couple of inches of packed (read: slick as hell!) slush. I'm not sure if it was me or my shoes (I think it was both) by I was skating with every step. Making corners was a real chore and in very short order I was not only concerned with just falling and hurting myself but also of sailing off the trail at a switchback and sliding down the embankment.

Depending on what you want to call a fall (I had lost my footing twice while climbing already and ended up on my hands and knees) I had my first one here. I put my foot down, it didn't support my weight and it shot out in front of me which deposited me on my butt. Luckily no harm done. This happened one more time and then the third time I did exactly what I was afraid of and slid off the outside of a corner while trying to round a switchback.

Before I started to accelerate too much down the mountainside I luckily found a root to stick my foot on and arrest my fall. Whew. I had to climb about three steps back up to the trail. If I felt like I was going slow before, now I was crawling.

But by now the snow was also abating and I could speed up. When I finally realized I was running on dirt I thought, "Time to reel them in!" Ha! Not only was I too tired to pick up the pace much but these guys were WAY off the front. At least I was able to really and truly run down West Tiger Mountain 3. At the bottom everyone was again graciously waiting for me. I didn't ask how long and they didn't say. :)

A highlight of the run was crossing the parking lot at the trail head. Bill lost his footing crossing a big log that was being used to denote a parking space and to avoid sliding under it he threw himself on top and for just a couple of seconds he looked like he was hugging the log like you would hug a long, lost lover. Good times.

As we exited the parking lot onto what is an easy trail (that actually descends as well!) Bill shouted, "Marathon pace!" and went to the front. I tried to keep up but after perhaps 100 m I was already getting shelled and found myself walking. On the flats!

I mumbled some epithets under my breath, tried to pull myself together and got my feet moving again. When I got to the pavement Brad (who has just been running 1.5 years) was about 100 m ahead of me and perhaps 100 m ahead of him was Brian and Bill was perhaps 100' further up the road. I gave it one shot and tried to close the gap to Brad but it was not happening. As I went up the slight incline just before you drop down to go under I-90 I was walking again.

At the time I felt like this was when I quit but in hindsight I had quit long ago. As those guys all turned right toward Preston I stopped, thought about it for about five seconds and then turned left toward Issaquah. I was hitting the showers.

Thoughts of salvaging the run by bringing it home with some solid temp flicked through my head but the one time I tried it I was reduced to walking again in short order. Fuck that. Even just running it in at whatever pace I was able to I still had to walk one more time for a few seconds. Ouch. I started this run with two bottles and four gels and only ate/drank half of what I took with me. Not sure the rest would have helped today.

It took until I was alone for me to realize that it was a beautiful day out. On the descent from Tiger it had not only warmed up but also cleared up and cruising along here next to the freeway my body was casting shadows. I passed two women running the other direction and they were all smiles. We exchanged pleasantries.

Then Shelley and I walked downtown. We hit the Pike Place Market where I got some food and some chocolate. Then we saw a movie. When we walked home after the movie the sun was still shining. I was wearing my cotton Swobo shants. It was a fabulous afternoon.