I need to give Gregory Mackenzie credit for this post title.

Many years ago when I was working in the Bicycle industry I had the chance to go to the Interbike industry expo a few times.

In those days - and probably still these days - there was a 'Taiwan pavilion' with booth after booth of products from Taiwanese manufacturers who were hoping to get some OEM spec on bicycles. Back then (we're talking the late 1980s and early 1990s) it was pretty much what you would suspect meaning lots of neon nick-nacks, crazy Hello Kitty handlebar baskets, center-stand kickstands, etc. But even back then, before Taiwan became one of the most respected aluminum and titanium and carbon manufacturers on the planet, there were some pretty progressive wares on display so I figured it was worth a look-see.

The one item that stood out to me and that I still remember to this day was a set of 'power cranks'. I think that's what they were called anyway. 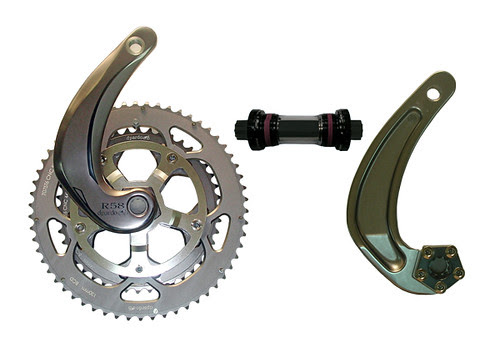 This image that I recently found is exactly the same as what I saw back then with the one exception of the bottom bracket spindle being splined now instead of the old school square tapered variety. The premise of this crank is that you supposedly get the best of both worlds.

Turns out this product is still marketed by dpardo(?) and if you go to their web site you will see the kind of claims they laud on the 'Sickle Crank!' we laughed at it back in the freaking early 80s and I'm still laughing at it now. Here is a quote.

And then there is this. 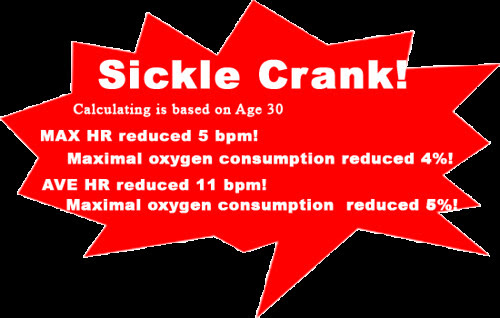 Sheeeit, how could you go wrong...?

Well, one way you could go wrong right is by actually staying awake during your 8th grade high school physics class. I mean c'mon people.

Speaking of wasted material, in this age of lighter at all costs, what makes these guys think they can sell this boat anchor of a crank? But obviously they are counting on the customer NOT thinking so that's kind of incidental.

Then there's the whole English as a second language thing... or Engrish if you will. Making fun of people that can't speak your native language as well as you can is rude but when a company is trying to market their product to you and doesn't hire a native speaker to even glance at their copy? You gotta love quotes like these.

If you have the time, check out their 'scientific justification' for more of this nonsense.

I want to leave you with one more image. I found this one on their 'Riders' voice' page. Just like all the other bikes on the page, this is some happy customer's ride and it's been equipped with the Sickle Crank! For those of you that don't immediately recognize what kind of a frame this is, I'll tell you. It's straight gauge steel (and I do NOT mean chromoly), it has stamped (not forged) dropouts, it has safety (read: not safe at all) brake levers, it has foam handlebar sleeves and all the cable housing is attached to the frame with clamps because it has no braze-ons. The shifters? They're on the stem - right where they should be. 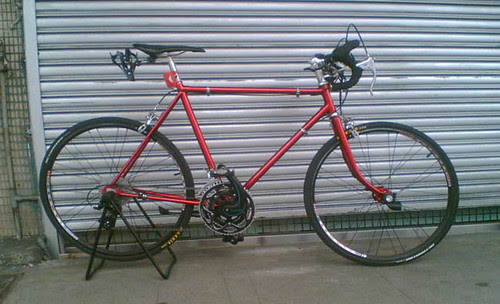 This proud owner was not only conned into these cranks, some one also sold him a new set of wheels and a seatpost and saddle. No doubt he could have purchased an entire bike that would out-perform this ride for less money than he sunk into the 'upgrades'.

What is even funnier than this Sickle Crank! is that this shit doesn't die. Oh no, here it is 2013 and someone else is pedaling exactly the same fairy tale only this time they are called Z-Torque cranks:

It appears this guy has a 2nd rate Kickstarter page going, only because he got booted off the real Kickstarter.