I managed to get myself to the gym AND I did well at the race. It was a banner day.

Usually I try to get in a short ride Tuesday morning but today it was misting outside at 5:30 AM and I just didn't feel like getting wet so I did the core thing instead. It was kind of tough today (especially while planking since my left elbow is pretty sore when I put any weight on it) but the feeling after a workout is almost always good. This morning did not disappoint.

When Dave H, Corrie M and I arrived at Pacific Raceways Rory told us that there was an issue with the drag strip so instead of a points race on the flats we were doing it down the escape road and up the easy hill. Nice. For sure I prefer the hill (any hill) out here and I also like the points race format so this was a win/win as far as I was concerned.

Other people it seems were not so gung-ho as I was and the air was FILLED WITH TREPIDATION. As much trepidation as you can have at the lowest stress event there is anyway. Plus I like to overstate things for effect.

And I experienced a new first - all the Cat 4 riders picking up gravel from the track. 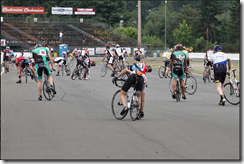 Core at the gym was okay. My left elbow is still too sore from my crash Saturday to put much pressure on it so I had to forgo one exercise but it's okay.

At the racetrack my 'warm-up' was once again nothing more than a few laps around a flat parking lot resulting only in me discovering that my legs were freaking tight from Saturday. So I called it quits about 10 minutes prior to the start and stretched.

Rory called all the Cat 4 riders up and asked them please assist in cleaning up the track. It seems something or some machine had scattered lots of gravel on the finishing straight and I was very thankful for this effort!

The fist couple of laps were sedate which was a good thing for me. See above about my crappy warm-up.

Points race formats are great. One reason they are great is it doesn't much matter when you attack as you go early when you are fresh, later when there is an unexpected opportunity or late when everyone else is tired. It's a win/win as they say.

After about three(?) laps I saw just such an opportunity after the hill and struck out. I have forgotten exactly how I got away but by the time I hit the left hand corner after the summit I was gone.

I do however vividly recall making a maximum effort to get away and as I rolled across the line getting my two points what should I hear but the first prime bell. Ouch. I glanced back to see what kind of a gap I had and it seemed reasonable so I throttled it back just a tad and carried on down the access road, around the corner and down the hill. It's usually the case that the pack can go much faster than a solo rider on this course because they can draft on the way down AND on the way up as the hill is not so steep but half way up the climb when I checked behind me again the gap was still there. I dug deep on the last pitch and managed not to bog down as I summited and rounded the left hand corner at the top. One more look over my shoulder as I entered the finishing straight told me that I had plenty of room so was able to ease off the gas and get another two points. Nice.

There was one more opportunity that presented itself when a couple of riders came up to me but our effort was not so dedicated and the pack soon reeled us in.

Since the race was only 45 minutes tonight and I had just gotten caught it was time for plan B. Help Dave. As the second prime bell rung I got on the front as we approached the climb. One guy jumped at the summit but I was easily able to follow (and so was Dave) and when this guy gassed I took over and lead the bunch around the corner and onto the finishing straight. It was a close sprint but Dave was able to take it and the season points. Whew.

There were just three of us in the race and Corrie was coming back after a hiatus from any kind of riding so helping Dave at the finish was on my shoulders. As we rounded the corner at the end of the finishing straight with one lap to go I was third wheel. Usually that is too far up but I did not want to get surprised. As we approached the descent one guy pulled off and then so did the other… there was nothing to do but take the initiative.

ASIDE - this was one time where experience helped me out. I figured that most people would not want to attack with less than one lap to go and I guessed right.

I pulled across the transition, up the hill (just fast enough that hopefully no one would pass me) and around the corner and then I was luckily still able to accelerate onto the straight. I was pretty blown from my half lap leadout but it worked! Dave got the victory and the season points.

ANOTHER ASIDE - to be totally honest it also helped that Mark M (Starbucks) got shelled after the first prime. I think he worked too hard to catch me when I was off the front and then when the pace did not let up on the next hill he was gone. But it would be silly not to take advantage of that.

After the race I found out that my four points were good enough for 2nd place! What a nice surprise. And then Rory M and Deanna had their annual BBQ which was fantastic. Double bonus. For the third year I was treated to a veggie patty which is incredibly thoughtful. Thank you BuDu Racing for putting on this series year after year!