the beauty of the Bemis

How many times do you walk down the isle of a store looking at bazillions of versions of what you need having no idea which one to buy? If you're in sales this deer-in-the-headlights look is easily recognized and a huge opportunity as the shopper is putty in your hands; you can pretty much sell them whatever you need to move. Sadly.

A few years ago I broke a toilet seat in our house. I guess I got a little agro when lifting the lid or closing it or something and twisted it enough so that the plastic hinges were no longer feeling very secure when you sat down. Shelley and I went to the Home Depot and down the bath isle where we promptly both got that same look… There were SO MANY TOILET SEATS. Some had padding, some had special coatings, some were painted, some were stained and some were just butt ugly. But not enough of them were butt ugly so the options we had left were still pretty overwhelming.

Eventually we found what seemed like a pretty darn good, basic seat for something like $5.63. It was painted, wood and probably the cheapest seat in the entire store, how can you go wrong? It was a Bemis.

As we paid the cashier he took one look at our purchase and said, "Ah, you can never go wrong with a Bemis!" Confirmation is awesome. 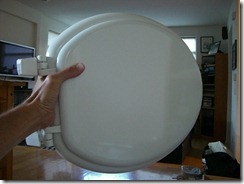 Last weekend we went and did it again. Not sure if we are hard on our toilets but this time we replaced all three seats in the house. And you know what? The Bemis was STILL only $5.74. I was so happy I decided to chronicle the installation.

The packaging is as basic as the product. 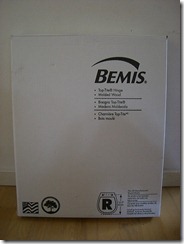 Which I for one appreciate. Why do so many manufacturers insist on shrink wrapping the item, putting the wrapped item in a box, that box in a bag and then that bag in another box that has been stuffed with plastic peanuts? No wonder our planet is only going to last another 30 years.

Installation is practically tool-less, all you need a screwdriver. Just pop the hinge covers off and unscrew the plastic bolts and remove the old seat. 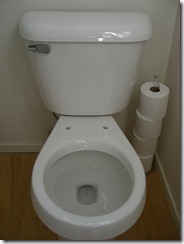 Installing the new seat is cake. About the only thing you could screw up is installing the nut upside down so be sure the beveled/concave side faces the porcelain. 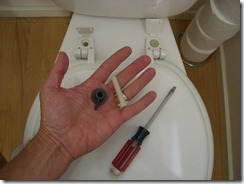 Tighten the bolts (but not too much, they're just plastic), snap down the hinge covers and she's ready for a test drive! Behold the Bemis. 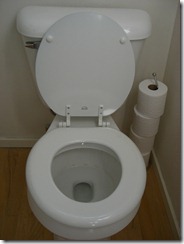 In case you were wondering, this is about the extent of how handy I am around the house.

Email ThisBlogThis!Share to TwitterShare to FacebookShare to Pinterest
Labels: house