If there is one ride that I hold most dear and that comes close to being a tradition for me this is it.

RAMROD (Ride Around Mount Rainier in One Day) is a 150 odd mile (depending on the course) counter-clockwise lap around the mountain starting and finishing in Enumclaw, WA. And when the weather is nice, there are no better views. ANYWHERE.

Way back in the day when I first considered attempting this I recall wondering how long it would take. I had done STP in one day with a couple of friends and that seemed totally epic. I know STP took us at least 12 hours and I think none of us rode for like a week after we finished! To do a somewhat equivalent distance with 10,000' of climbing seemed ludicrous. Especially since we had no idea how to prepare or train.

But a friend and I started. And my friend rode tubulars. And he flatted about 30 miles in.

So I was pretty much alone from then on and it took about six days for me to complete the ride.

After this nightmare I decided to come back and try it again?! Luckily this time no one flatted and we didn't take so much time. This trend of taking less time continued until I gave racing (and rides like this) a break.

ASIDE - this 'trend' culminated in one day that a then teammate of mine (Rick B) and I set out to 'win' this ride. We started with about four others but unfortunately left them behind on the climb to Paradise. From there to the finish it was just the two of us and the headwind for the last 40 miles was viscous. But we did it; in so much as you can win this sort of thing anyway. I go back and forth about that achievement. At times I am proud and at times I just laugh. Especially when I see other people 'racing' (the event is currently not timed) our group when we get close to the end after we have pulled them for 40 miles. From what I understand that time we posted for the original course still stands. And because they have stopped timing this event that record has so far been retired. This year I heard talk of timing chips like you use in a running race being implemented next year. If anyone wants to set the bar higher than Rick and I were able to do way back in 1987 I say go for it. FYI we did not have very much fun on that day.

Fast forward 15 years and my old racing buddy (John P) that quit racing about the same time I did gets hold of me and says, "Let's do RAMROD!" I'm thinking you must be crazy because the last time I participated in this event it was timed and people were doing nutty stuff like enlisting entire teams (that never finished!) to pull them to the first climb and were switching to TT bikes at the top of Cayuse Pass and had personal support vehicles. But I eventually relented and we did the ride.

And you know what? It was a blast! It's amazing what slowing down just 1.5 hours will do for your morale. These days our times are pretty consistently right around nine hours total time assuming we keep our group small and it has been a real pleasure to get out and see the mountain up close.

This year it was again going to be just John and I when I heard from Charley D (another former teammate) who was looking for company. I said sure and we all met at the start. Where we spotted a current teammate (Dustin VW) and some east siders. Nice. So about seven or eight of us rolled out and as usual our group rapidly swelled to something like 30 riders.

Our group did all the pulling but that was fine with me. You never know how safe or predictable a stranger is on the bike and it wasn't like we were killing it, our pace was just a little faster than most people would ride if they were not part of this big group.

The only problem with a bigger group is you get separated. And that happened several times. Twice we waited, once Dustin pulled some people back up and this cost us a bit of time but it was okay. These days this ride is LOW STRESS and I like it that way.

I also like to hit EVERY food stop these days. Why the hell not? It's one of the big benefits of these organized recreational rides. And I gotta say, RAMROD has some of the best food.

Up to the park entrance the work had been shared pretty equally but once we entered the park Dustin went to the front and rode his pace. Which was kinda quick for me… Almost right away Dustin, myself and this guy named Malcolm separated from everyone else. Malcolm was riding a straight-up steel frame and fork but also weighed at least 30 pounds less than me. And Dustin is much stronger than me. In short order I was hating it.

You know how you go through bad patches and then sometimes come good? Thank goodness that is what happened to me on the climb up to Paradise. Half way up I was seriously hurting and then when we got to the intersection where the official route turns right I talked these guys into going left all the way to the top. And I felt good the rest of the way up.

And was it worth it! It was an incredibly clear day and the mountain was right THERE and you could see the crevasses where the snow turned from white to blue and I was in heaven. We took a couple of pictures and then headed down to rejoin the route. No harm no foul I figured. :) 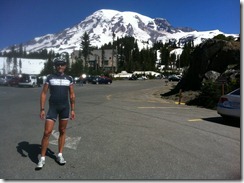 At the Box Canyon food stop we checked out the river which was pretty gorged with glacial melt, all brown and dangerous looking. 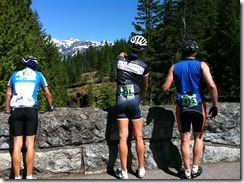 I also had two chocolate filled croissants. Experience has taught me that three is a bit much. :) From here it was up and over Backbone Ridge (always a little longer climb than you want it to be) and to the bottom of Stevens Canyon where I topped off my water and we headed up Cayuse Pass.

Everyone else had opted for a head start leaving Box Canyon and so it was just John, Dustin, Malcolm and me. Shortly after starting up the climb proper Dustin said something like, "I'm riding this one at my own pace." and fell back. A couple of minutes later it was just Malcolm and me. Then Malcolm shifted down (as into a smaller gear) and rode away from me. It was then that I recalled him saying something like, "I'm having a super day!" as we left Box Canyon…

I found my happy place in the 39x23 and drank Gatorade and poured water on my head. It was a combo that was working well for me. Incredibly I felt like I might bonk so I gulped a gel which helped tremendously. Maybe two chocolate croissants were not too much…? :) I stopped to stretch for a bit a the water stop and then waited for John at the summit and we rolled down to the deli stop right away in order to maximize our time down there.

It's been said by probably every RAMROD participant but I'll say it again - the deli stop rules. Volunteers are making you sandwiches to order. The cold cuts and veggies are kept on ice. So are the drinks. They have just what you are craving like POTATO CHIPS and MUSTARD. It really hits the spot.

After about 30 minutes of downtime here we rolled out with a couple of additions and it was a good thing. There is always a headwind on this stretch and the more the merrier in my humble opinion. We all took short pulls and soon the speed ramped back up and we were cruising along. Once again we picked up groups along the way and our bunch swelled to at least 20 riders but we did a good job of gate keeping and six or seven of us did all the pulling. Safety is paramount after all and I was in a huge, diverse (in terms of cycling skills) group once that caused a crash and there aren't many things that are less fun than doing down at speed after riding 120 miles on a hot day.

The descent down Mud Mountain was fun as usual. And as usual at least one person nearly went off the road in spite of our announcements that this is a tricky descent.

And of course at the bottom two guys that we had pulled the last 40 miles decided to 'race' us and 'sprinted' ahead. Naturally we closed it down, established our authority and insisted on a casual, friendly finish. Kidding. Not.

It worked until we were two blocks from the finish line (literally) when two other riders again sprinted out of our group to finish ahead of us. Nice. They probably went home to tell their friends that they had just beat a bunch of racers!

Finally it was time to hit the showers. YES. Did I mention that there are showers at the finish…? Damn right there are and boy do they feel heavenly. Then it was time for some free ice cream, more drinks, some rehashing of ride memories and we all made it home in time for dinner.

Thanks to John for his company year after year and his incredibly compatible level of fitness, to Charley for his unflappable enthusiasm and to Dustin and Malcolm for their super efforts. Given this kind of group I will be back again and again and again.

Technorati Tags: RAMROD,Mt Rainier,Ride Around Mount Rainier in One Day
at 9:15 PM