Yesterday (or a combination of yesterday and the previous weekend) has destroyed my legs. I thought I could bounce back today with a moderate run but the answer to that question was an emphatic NO.

I was at Cougar with Todd Morse Tucker and Daniel Paquette and Dan didn't exactly go fast up the first hill but in his words, "I wanted to get it over with." I was off the back within 200 m.

Things didn't change much for the next eight miles. Twice I had to walk for a few seconds, once I had to ask these guys to simply wait up. Lucky for me they did. With about one mile to go Dan scoots by and says something like, "Okay Martin..." Todd was right on his heels and they disappeared down the trail until they were literally out of sight.

I was so shell shocked I had to walk again. After pulling myself together I decided to see if I could increase the pace knowing I was very close to the car. I managed to up the tempo for perhaps half a mile when I saw them again! They must have slowed down because I caught them and managed to hang on until the bridge. Oh man was that hard. My legs are wasted. To top it off I felt like I was bonking those last two miles. Totally. Empty. Yes, I had a big dinner last night. Whatever.

What's hilarious is we ran this loop in almost the exact same time as we always do, it just felt 10 times as hard. What's also (sort of) hilarious is it was kinda cold out on the trails today! There were sections that were noticeably cooler than the parking lot and this meant my circulation-impaired hands got really stiff and I lost coordination. Apparently so much so that I did not turn my GPS off properly at the end of the run. Damn. On the upside I am getter better at editing my GPS files to fix these problems. I guess it's time for gloves when you start running at 5:45. 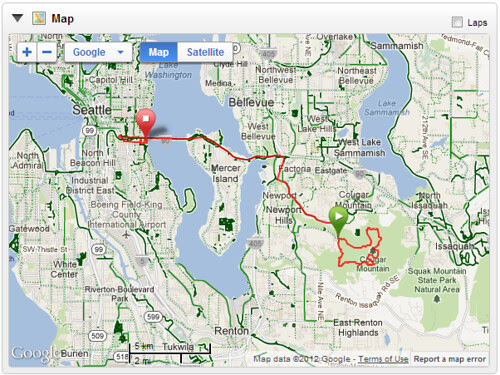