Rainbow Bingo at the Senior Center of West Seattle

What is Rainbow Bingo? It's FUN; that's what. Shelley and I got invited to this a few days ago and I will be back.

The evening was a fund raiser for the Senior Center of West Seattle. Turns out it's a pretty popular night and the West Seattle Blog had some details. Plus, we had the most entertaining caller ever and Jell-O shots(!), what's not to like? Nothing, that was rhetorical. Good times. 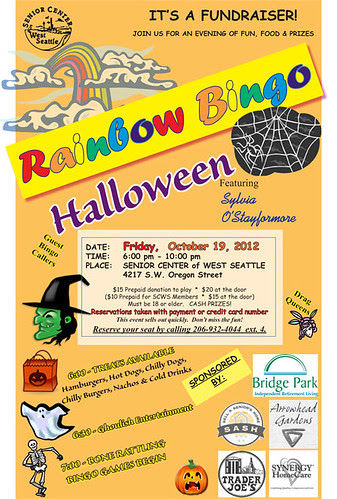 The caller was Seattle's own Effervescent Hostess Sylvia O'Stayformore who is a ton of fun and had this cute,little jingle she would sing before the start of each game. 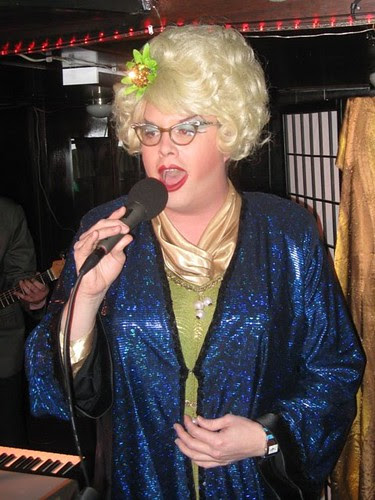 [Sylvia was not wearing this outfit, I had to scrounge a photo off the Internet.]

And of course the Sisters of Perpetual Indulgence were there too... aren't' they everywhere? The answer seems to be yes. 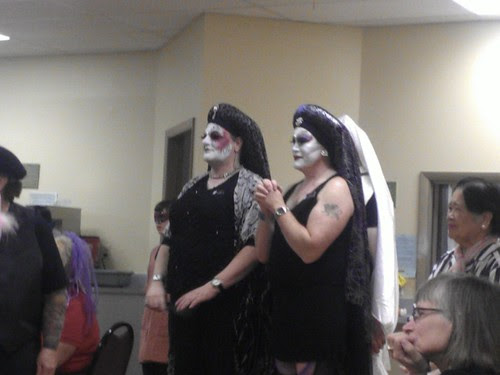 And trolls! Trolls were there too. 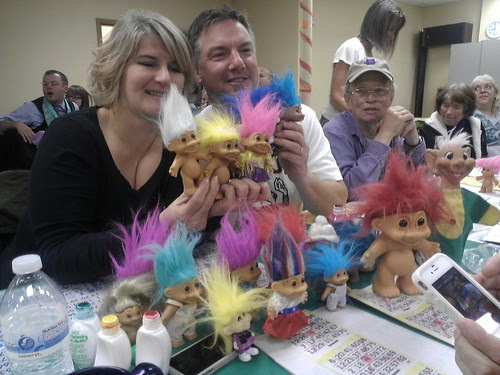 Tickets were a paltry $20 and extra game cards were just $1! Come to think of it, everything was cheap; beers were just $3, the Jell-O shots were just $1, 2-packs of cookies were also just $1, I mean c'mon. I was in heaven. At least as far as excess consumption goes.

I discovered you need to pay attention to play Bingo, who knew? I figured it was a slow moving game and you could drink yourself silly and still do okay. Not. The caller can make it as slow or as exciting as they want and Sylvia kept the pace hot. At one point I purchased another card (each card had six games) and playing 12 games at the same time was more than I could handle. Stress...!

I also discovered that dobbing is a blast. in fact, prior to this day I had no idea what dobbing or a dobber was. It's like this massive felt-tipped marker with a huge fluid reservoir and when you 'dob' (read: dab) your bingo card it colors the entire square. It was so much fun I found myself dobbing random bits of paper and even Shelley's card from time to time. One word: addicting.

Did I mention the penalties? Oh yes, there were penalties... Turns out I was not the only person that had a hard time following the caller or who got excited about dobbing and there was more than one 'premature Bingo' on this night. As Sylvia said, "It happens..." Being premature got you a public spanking from one of the Sisters.

In addition to buying extra game cards and drinks and food, you could also buy raffle tickets. Sure you could get one or two but the cool thing to do was to order a 'Sister Measure'. That meant the Sisters would take a roll of raffle tickets and wrap them around certain parts of your body to 'measure' you. However many it took is how many you purchased. :) Hey, it was a fund raiser after all.

By the end of the evening I was spent! All the cheering, jingle singing (we all sang along with Sylvia), dobbing, eating and drinking wears you out.

Did we win? One person at our table won $125! And promptly gave half back to the Senior Center. It's what pretty much everyone was doing. Way to go.

Email ThisBlogThis!Share to TwitterShare to FacebookShare to Pinterest
Labels: social