No official results yet but I had to get this down on 'paper'.

Excellent weather, awesome trail conditions, a much faster field than last year for the SCOTT Cougar Mountain 20 Mile and I prepared by partying last night. Oops...

Cougar Mountain is right in my back yard and it has some of the most incredible trails. The Seattle Running Club (which I recently joined) puts on a trail run series in conjunction with Northwest Trail Runs out here and because cycling has always been my main focus I have only ever done the last/longest one. Today you had the option of running 50 km or 20 miles. I judiciously opted for the shorter distance. And by 'judicious' I mean strategic. And by 'strategic' I mean I was hoping to repeat my victory from last year. Plus racing 50 km just sounds HARD right now.

Last night Shelley and I went to the BUMP! (photos coming soon) and it was a blast but it also meant I didn't hit the sheets until 1:00 AM. Luckily I at least limited myself to three beers all night. Still, when that alarm went off at 6... ouch. I ended up doing okay, here are the spoils of victory. 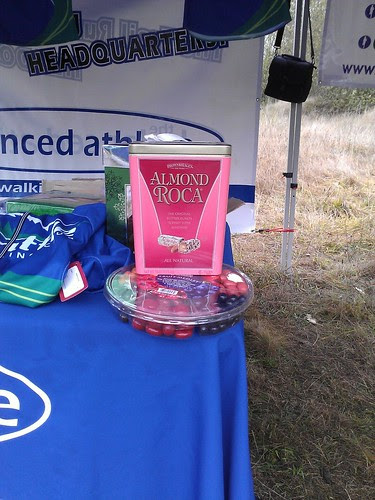 Sure you can get your race number early if you pre-register but I didn't bother figuring there would be plenty of time the morning of the event. Check-in was supposed to be at 7, the race meeting at 7:30 and the you run at 8. No problem. Unless the people running check-in don't get set up until 7:30. Rats. Other than that everything went very smoothly. When I finally did get my number and jogged to the van to ditch my extra clothes (with 13 minutes to spare) I was a tiny bit agitated but I still get somewhat nervous for running races so it was okay.

ASIDE - as I was going back to the start I thought that if I were to paint with broad strokes I would say that bike racers are much better at pinning on numbers than running racers. But then as I looked around I saw some people that obviously knew what they were doing and so I had to redefine my thought and it seems that it's just the more recreational runner (and cyclists) that don't know how to pin on a number. Oh well, they'll learn. Maybe.

All right, I guess the race meeting was a bit long too... :( But at least they combined it with staging everyone so when the meeting was over we took off.

Wow... last year I was pretty much right up there with the leaders but not this year. Instantly about 20 people started leaving me in their dust. But today I was okay with that. :) One lesson I learned from last year was don't start so freaking fast! This time I kept it reasonable and hopefully I would not fade at the end. Last year I totally died and the last five (10?) miles were pathetic. And they hurt.

Todd and I were running together which was really cool. We chatted a bit and twice Todd scooted past some slower people and I had to play catch up. Way to go Todd. Unfortunately Todd and I separated a few miles into the race; I went a little faster on a longish descent and got a small gap.

Around the time I got to the first aid station (they were roughly at 5, 10 and 15 miles) I had caught this 50k runner with a pack. He didn't need to stop but I did so he suddenly had 100 meters on me. Funny how the brain works. Since I had caught him I did not want to let him go and after grabbing a bite of banana (there was no gel at the first aid station!) and topping off my bottle with Nuun I made a bit of an effort to reel him back in. It seems I was going a little faster on the climbs and he was already walking most of them but on the descent and especially on the flats he was pulling away from me. This being a rolling course we swapped the lead about three times and the last time as I jogged past him on a climb he said, "I sense a pattern..."

Before the 2nd aid station you charge down a monster descent all the way to Hwy 900 and this time I was determined not to let him catch me so I didn't put on the brakes quite so much. On the one hand I vividly recall last year when I tore down this hill and then was crushed as soon as I turned around to start the climb and on the other I felt like I was not going that fast. But what I was doing was sweating! It was not a cold day and I had on two shirts. Combine that with some humidity and you get soaked clothing. 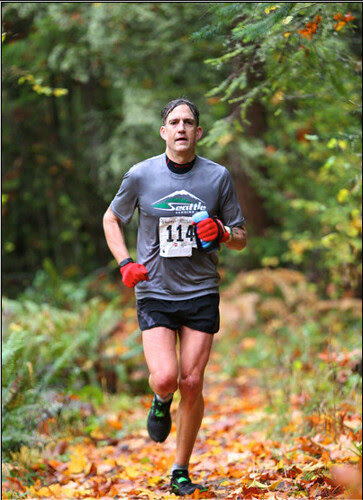 [You also seem to get slicked down hair that is parted in the middle...]

As I got to the intersection where people coming back up turn off of the trail they had just come down I started to scan ahead to see if anyone in the 20 mile race was ahead of me. I was getting close to the bottom and had my hopes up when suddenly two guys were coming up the hill. Running no less. Looks like no win for me this year. :)

Then came another. And then came Eric Sach and then one more. Argh... I guess I had to resign myself to a top-10 finish today.

Since I had only eaten a bite of banana at the first aid station I grabbed two gels here and since my bottle was still mostly full I didn't bother to get any more fluids. Mistake.

I started up the hill and boy is it steep at the bottom... but I was running it! And darn it if I didn't run this entire climb. Nice. That's a first for me. But of course this hill is not the last climb and I started to slow down.

In the back of my mind I was hoping that I might be able to reel one of the guys ahead of me in but I couldn't really speed up so I had to rely on one of them slowing down. And guess what, about two or three miles later I spotted Eric up the trail. I guess I had a little left in me as I was able to increase the tempo just a fraction to hasten the catch but then I promptly fell in behind him as I was burning myself out.

This was nice. Sometimes company is great and today was one of those days. We chatted about stuff and ran. And the pace was not torrid.

Then the cramps hit me.

Man, I have only cramped twice while running and this was the second time. This first time was back in August on a long run in hot weather so what was going on here? It must have been staying out last night, the beer and not drinking enough. Elementary my dear Watson. And like a true competitor I never mentioned it to Eric. Instead I tried to rub my legs while walking (Eric was hiking the steeps and suddenly I didn't feel the need to run) and draining my bottle. But it was feeling like too little too late to tell you truth. I was touch and go with cramps the entire rest of the race; luckily they did not shut me down.

At the last aid station Eric - who had a hydration belt - just grabbed a bite and was off. I had to fill my bottle and then I gulped another two gels and took off after him. Again, having caught Eric in the first place I didn't want to let him go so pushed as much as I was able and managed to reel him back in. Slowly though.

I was perfectly content to run it in with Eric but when we turned right on the Red Town Trail I  suddenly gapped him just a little. Having no idea if this good feeling was going to last I opted to carry on and slowly pulled ahead.

The last two miles of this race are tough. First you chug up a brute of a climb that is at least .5 miles long and then it's some potent rollers (to me they were anyway, especially at this time on this day) to the finish. There are a couple of flatter sections but as usual, the flats just kill me and today I was having trouble keeping the speed up. In fact, twice I found myself walking on the flats for a few seconds just to pull it back together.

I have to admit I did look back once to see where Eric was and not seeing anyone it made it easier to walk. :)

The last flat section I recognized and managed to twist the throttle just a little so that I was actually running when I crossed the finish. Whew. About 20 minutes ago I had noticed that my GPS display went blank. Turns out it had run out of battery...?! Last night I set my GPS aside so I would not forget it and I can't believe that 12 hours of just sitting there in plain old watch mode drained it so much that it only lasted this long. Sucks.

After walking around a bit to cool down I could tell that I had worked hard. Whenever my stomach feels unsettled, I have had a hared workout. I had to chill for a bit before I could indulge in any recovery food. that gave me an excuse to walk to the van and change my clothes and as I headed back there was Todd. Awesome.

In terms of conditions I could not have asked for a better day. And had I not treated this race so casually I might have been able to break three hours. But I am NOT disappointed. it was so beautiful in the forest and the colors of the leaves was stellar and running with Todd and Eric is super fun. Hopefully next year I can make it to some of the shorter races - Cougar Mt is a fantastic place to run.
I took a chance today and wore some different shoes. Prior to today my longest run in these was 10 miles but I wanted to see how they felt on longer outings and they were okay! I was hoping the lighter weight would come in handy (it might have) and that the more aggressive tread would have better traction (it didn't really). Still, nice to know they worked which means I have more options.