Nice! Martin finally gets out to the Leavenworth/Icicle Creek area for a run as the Larches change colors. 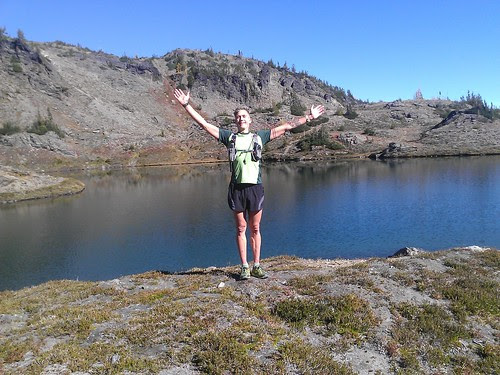 Recently I joined the Seattle Running Club and they have made it a goal to hit some incredible trails every year. I love it! Recently they have run down by Mt Rainier, Mt St Helens and today this. I'm only bummed I was not able to join them for all three of these outings. The original plan for today was to run the Enchantment Lakes loop but smoke from forest fires have closed one of the trailheads so no wanting to do an out-and-back we chose this route instead.

This route is a loop but you start about 2-3 miles down the road from where you finish so we all met at the finish and then loaded up two cars and shuttled to the start. It was pretty darn chilly out (40?) but I knew it was going to warm up pronto so tried not to overdo the layering. I was pretty close to getting it perfect thank goodness.

The group was about 10 people so guaranteed there would be different speeds and I'm really glad I had company. Turns out today my pace was just right for Todd Morse Tucker and Marlene Farrell. Nice. What I also thought would be nice was that the run appeared to be divided into quarters; a 5-mile warm up, a 5-mile climb, 5 miles through some alpine wilderness and then a 5-mile descent. I should have looked at the counter lines more closely...

The trail was dry! In the beginning we were running through about 1-2" of dust that had not seen any moisture for what I'm guessing was months. Down here the vegetation was these really pretty, and really big bushes with huge leaves. Here we are in the midst of them shedding the first layer of clothing. 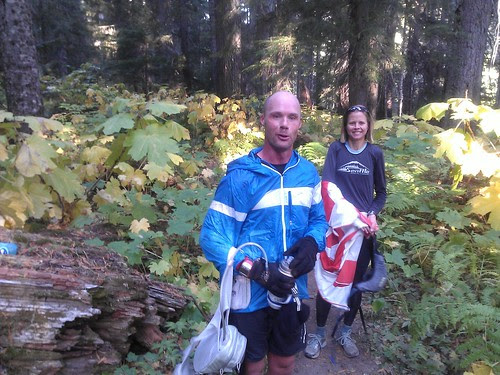 We ran through these plants, through rocks, through alpine meadows up to the top of the ridge. 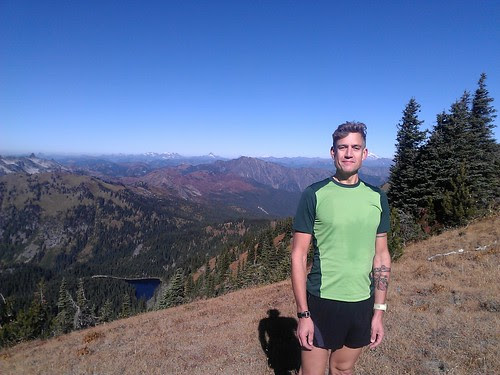 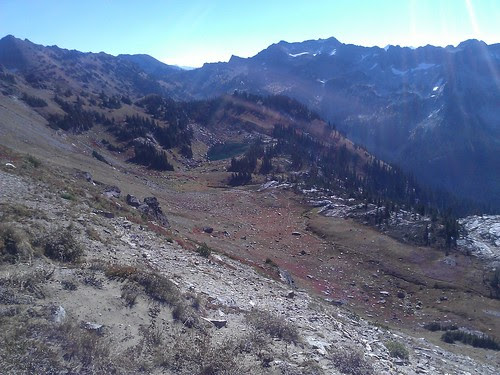 It turns out the 'traverse' along the ridge was really a ton of up and down with the ups being pretty severe as in we had to hike them all. On the elevation map below it looks like just two bumps along the top but each of those two bumps was a brute of an incline. One was so steep that Marlene checked her map to be sure we had to go this way. :)The last one had us climbing out of a north-facing snow field.

Once on the descent I thought, "Yes, now I can RUN." Not quite. First it was really, really steep so you had to watch your footing and then once we got into the trees it was so overgrown that you couldn't see where your feet were landing half the time so had to walk quite a bit here as well. It did slowly get more and more open and the last two miles of the descent were amazing. It was this gentle slope and soft surface and I was banking around corners like I was on skis. I almost felt like sticking out my arms the way little kids do when they pretend they are an airplane.

How did I feel? S L O W. Oh man, I tried to pick it up on those last two miles and was just barely able to do so. It seems this fall all I have been doing is running slowly and it's pretty obvious that I need to incorporate some strength stuff (hills, stairs, etc.) and some speed work. Oh well, I guess that will happen when I get motivated. :) I was also sucking wind. We did get up in elevation a bit and I noticed it.