After Wednesday's more-intense-than-usual effort on the Expresso exercise bike I tried to make today a notch more mellow. Guess what, it worked! :) It was another 'extreme' route but so far the extreme routes I have been choosing are the easiest ones and next week I'll need to either step up my game meaning they get longer in distance or perhaps I can try to ride two shorter routes back-to-back? That might be fun. In theory trying a longer route would be fun but I probably can't take such a massive lunch break to complete a really long ride. 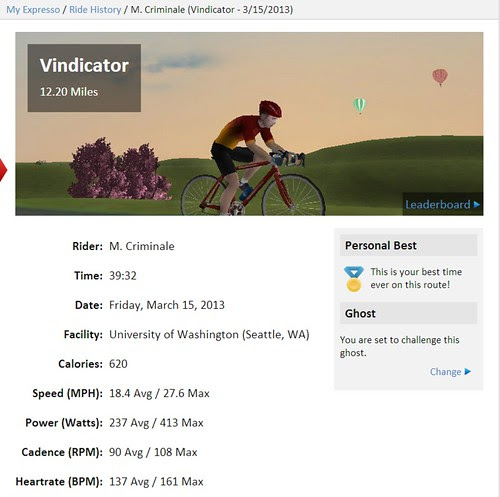 As intimidating as the name of this route sounds it was not bad. Once again we just rode through some grassy hills. A couple were quite stout but if you shift down (which what I do ALL the time these days on account of my ankle so I can spin) it's not that bad.

These bikes have quite a range of resistance. The scale ranges from 0-30 or 35 (40?). I'm not sure because I never get it above 18 for any kind of sustained amount of time. I think I tried 20 once on a massive descent but that's it.

Today there was a woman riding another one of these bikes next to me with her personal trainer encouraging her. She had selected a very easy course but had cranked the resistance all the way up to 30! What was her cadence you might ask? Somewhere around freaking FORTY.

And her personal trainer just kept going on and on about how awesome it was that she had the resistance at 30. :( I think her watts were around 140 or 150 and all I could think was that once again personal trainers are proving to me that they are idiots. Especially since this was supposed to be a warm-up for some circuit training or weights that they were going to do later.

if I ever own a gym the personal trainers that work there will absolutely know which way is up and won't be so damn stupid.