Martin and Shelley take a juice cleanse for a test drive

I have friends that have tried a juice cleanse and Shelley's sister recently completed one as well. Plus, tons of celebrities do them too so how hard could it be, right? Right.

I'll just get this out of the way right now. I do NOT think you need to 'cleanse' your body or 'get rid of the toxins'; I firmly believe that if you live even a moderately relatively healthy lifestyle (which we both do) that your body does everything it's supposed to and does it way more efficiently than you can with juice or powder or capsules or whatever you want to spend lavish amounts of money on.

So why was I even entertaining doing this? For the challenge of course! Everyone talked about how hard it was and then I read an article in The Stranger about one of the staff doing a 5-day cleanse and it sounded kinda burley which only fueled the competitive fire that much more. So a couple of weeks ago Shelley (who had been wanting to give this a try too) and I decided it's only money and dropped bank on BluePrintCleanse.

Hey, I drink a smoothie just about every morning anyway and I love fruit and vegetable juices so how hard could this be? For starters, let me introduce you to 'breakfast'.

I mentioned dropping bank and this 3-day cleanse cost us a total of $450. That included six juices per day for each of us and shipping to our house. That's a total of 36 16 oz. juices so if you do the math we're looking at $12.50 per bottle. I know, outrageous. Still, I was down with the experiment and no doubt I have spent wasted money in WAY more frivolous ways so I wasn't upset. Besides, I made the decision and knew the cost going in so there was no surprise.

Along with the juices we got these cute little insulated lunch bags and a shit ton of gel-filled freezer packs to keep your juice cold at work in case you don't have a refrigerator. That was kind of neat. And no doubt smart on the part of BluePrint as I suspect it helps take people's minds off of the extravagant cost of the juice. 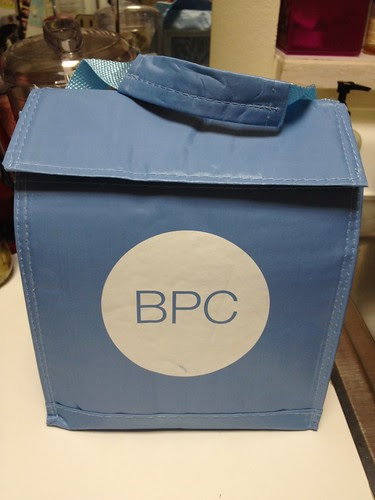 ASIDE - turns out the bubble wrap in the insulated shipping box is recyclable! Way to go BluePrint.

We unpacked everything and the Shelley lovingly arranged our next nine meals in the refrigerator. Ready, set, go! 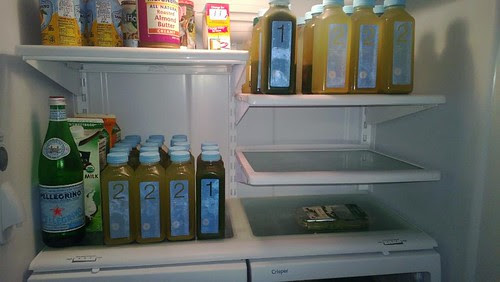 We decided to try this over the weekend so that if a worst case scenario materialized it would not affect our co-workers. You're welcome.

I was also going to try and continue to exercise while on the cleanse. Reports of how easy/hard this was going to be varied quite a bit so I had no idea what to expect. Friday went okay. And really, why wouldn't it? I don't usually eat before I go to the gym in the morning so just had to deal with a but of hunger while riding the exercise bike at lunch. If anything I felt pretty good!

Diner time was another story though. I added up the calories in all the juices and the six bottles give you about 1,000 calories total so in spite of the fact that we're not exactly starving ourselves, it's way less than I usually consume in a day and a huge mental game when you don't get to chew. Hence the challenge.

At 'dinner' we cheersed each other, made a couple of jokes about our meal and went to bed hungry. Day #1 done.

I was resolved to go to the gym and ride my bike today. Just because. My gym doesn't open until 8:00 AM on weekends and I usually wake around 4 or 5 so I had three solid hours to think about how much I was not eating as I drank some tea. Still, the gym went okay and I was not suffering physically. Yet.

When I got home from working out I had my first bottle for breakfast and then made my workout food which today consisted of bottles #2 and #4 each in a large water bottle and topping that off with some green tea. I know what you're thinking, that's some wicked heavy shit; how was I going to be able to digest all 220 calories while out on the road? Let's just say that the ride today was not fast. Like zone 2 max.

I think I tried to fill the rest of my day with tea and projects as it was way easier to do this when you are not sitting around with time to let your mind wander and your stomach growl.

Come dinner time I was SO appreciating the BluePrint strategy or giving you a nice, rich (by juice cleanse standards anyway) drink for dessert. #6 is mostly cashew milk which tastes like manna from heaven by the time you drink it rolls around believe me. It also gives your body some calories and fat to work with while you sleep - smart move.

On this day my stomach was rumbling the most for sure. But... no shitting! So much for all the 'cleansing' and 'excavating' that was supposed to happen. In fact, I just dried up and with nothing going in, nothing was coming out. Except for the fact that I had to pee like every hour. Turns out tea tastes really good when you are not eating.

On this day I had planned to participate in a Washington Trails Association work party. I was a little worried as I normally get pretty cold when I'm standing around in the shade and the wet and with no food for fuel I was thinking I might get extra chilly. I was right. But I survived.

I had on four layers up top, a hat and my rain coat but only one layer on my legs, running shoes instead of proper boots and work gloves that were not insulated. Oops. Three or four times I had to take a break just to walk up and down the trail while swinging my arms in an effort to warm up. I vividly recall this one kid that got so warm he stripped down to a t-shirt! I was incredulous.

The hardest part was when everyone else took a lunch break and started pulling out these thick, tasty looking sandwiches, food bars, potato chips, you name it. Did I mention the work party organize brought along a huge bag of assorted Halloween candy? That was one of the times I went for a walk.

Which was in fact the truth as I had been drinking the three juices I brought along pretty steadily.

When I got home I was cold, tired but not as hungry as I expected to be. By day #3 my body was starting to get used to this caloric intake and like I said above, I was not starving and I was almost too tired to eat. Almost. If was not trying to exercise, I bet you could live off of this for a long time. Hell, there are millions of people in the world right now that are living on much, much less. It's hilarious sad sometimes what 1st world people will subject themselves to isn't it? Not only are we making ourselves hungry, we're paying someone else to do it.

On the upside, if I had not been on the trail work party I would have had a miserable time with the cleanse on this day. Having something to do all the time was a HUGE assistance. Thanks WTA.

Did I mention that drink #6 was delicious? Oh my f'ing god did it taste good on this night. Liquid gold and all that.

No, we didn't do this for four days but on day four I did try to go to the gym in the morning before eating anything. It worked.

Would I do it again? Maybe, but I just tried it to see if I could do it and I don't think there are any health benefits to a cleanse so probably not. But never say never and even one year ago I would have never dreamed of giving this a shot.

How hard was it? With Shelley doing it with me it was actually not as hard as I thought it would be! Had I tried it alone I would have no doubt caved on day #1. I'm nothing if not weak. But really it is just a mental game as 1,000 calories is still living just fine if you are not doing any endurance activities.

Did we cheat? Nope, neither Shelley or I cheated even once. We looked at all the 'acceptable' ways to cheat in preparation but ended up not needing to. Nice.

Was it worth the cost? NO. But like I said, we knew what we were getting into so this was more of a scientific experiment for me and I'm okay with that.

Did I shit my brains out or break out or get a rash? No. None of the above. I was fully prepared to have my body freak out and when nothing - nothing at all - happened I was surprised. I chalk that up to the fact that Shelley (who also experienced no surprises) and I were already eating super healthy with tons of vegetables so simply cutting back and blending everything was not any kind of shock to our systems.

Was the Foundation Cleanse the right one to go with? In retrospect I wish I had tried the Excavator just to be able to say I did. The only difference is they only give you veggie juices with that one whereas the one we tried had fruit/sweet juices as well.

Was it fun? BluePrint does send you some pretty humorous emails when you place your order and throughout your cleanse but they only go so far.

Is the marketing way hyped? Well... BluePrint walks the tightrope fairly well but ultimately they are out to make money and when they sell this thing to brides who are trying to fit into unrealistic wedding dresses it shows their true colors. Then again, people are stupid and I have little sympathy and was mostly just entertained.

Here's to being entertained! Next time I think I'll do it by adding food instead of subtracting it.

Email ThisBlogThis!Share to TwitterShare to FacebookShare to Pinterest
Labels: food