Giving back. Everyone should do it.

Okay, now that all my philosophical pontificating is out of the way let's talk trail racing. Today I showed up at Yakima Skyline Rim 25k/50k (promoted by Rainshadow Running) to assist with check-ins. Way back when (read: before I torched my ankle for the second time in rapid succession) I had intended on running this race. My sister ran it last year and said it was tough! Apparently the word 'tough' is like a magnet to Martin and I was all over it.

Anyway, Shelley has family in Yakima and I was motivated by the not-very-unselfish benefit of getting a free entry to some future Rainshadow event that volunteering gets you so we figured why not kill the two proverbial birds with one stone. Boom. 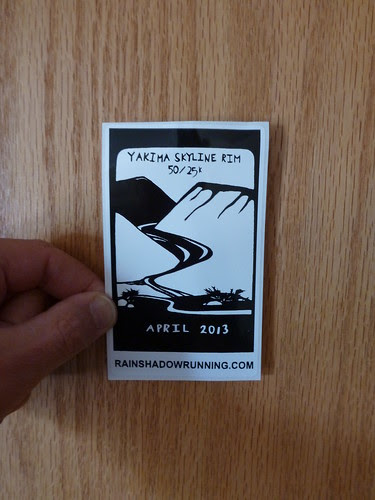 Let me start by saying that the driving directions to the start were probably totally obvious to a local but I'm not. And I'm further impaired at 5:00 AM when it's dark and I'm on unfamiliar roads. The directions said, "Take Hwy 12 west to I-82 W". Oops, turns out if you are leaving from Yakima and get on Hwy 12 heading west you totally miss 82 and are heading out to Naches. Crap.

Lucky for me I tend to leave early for stuff like this so in spite of wasting 30 minutes doing an out-and-back on Hwy 12 I pulled up just when I was supposed to. And it turns out I was there earlier than most of the other volunteers...!

The day was going to be perfect for running. A cool (but not cold) start and then warming up to something like 60 degrees. There might have been some wind on the course but it sure didn't slow Maxwell Ferguson any. Again, boom.

I was doing my volunteer shift at the check-in table. 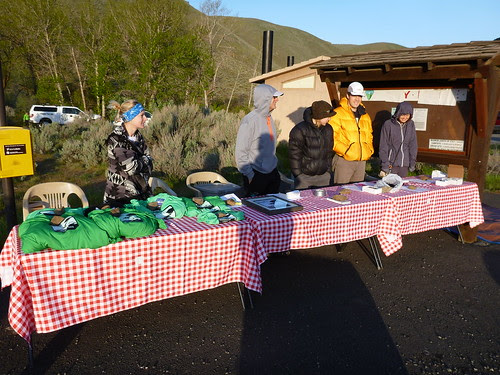 We got to check people in, hand out numbers and shirts and sell hats. Of course we also got answer all the questions I am usually asking like, "Where is the start?" and, "Where is a garbage can?" and, "Can I leave my jacket at this table with you guys?"

Since we had plenty of staff at the table and since things quieted down some when the 50k race started I asked to sneak away for 10 minutes to film the start. There happened to be a picnic table near the bridge so I had a super vantage point.

The runners went away from the course/out to the pavement and back to spread them out s the entrance to the bridge was tight and only one person could fit through at a time. By the time they came back there was already a separation with two leaders out front.

Working for Rainshadow Running was strange. On the one hand it seemed like they didn't really take an active role in educating volunteers in terms of what they needed to do but on the other hand pretty much everything happened smoothly and without a hitch. I get the sense that many of these people are either 1) Rainshadow Running groupies and/or 2) pretty hip to what goes on at a running race.

It was fun to see so many friends at the race and it was exciting to be here! Also kind of hard as I sorely wish I could have been running instead of standing on a picnic table. On the upside, the recovery has begun.