A funny thing happened at the Pride Parade the other day.

I've been going to the Seattle Pride Parade for years. It's awesome!

What is not so awesome is that some people use this event and a confrontational style to espouse alternative viewpoints. I'm all for letting people say what they want but when they happen to be standing way too close to me and yelling in my ear it pisses me off - not gonna lie.

For at least three years now I have seen this same guy. You know who I'm talking about, he's the guy with the 'Jesus Saves' sign that has been laminated for durability in one hand and a bible in the other that has what looks like just about every other page marked with a stick-on tab so he can reference specific quotes on demand.

ASIDE - I gotta wonder what he is thinking, right? If he's trying to convert folks it seems he has picked the wrong event and even if some people were on the edge, his agro attitude is pretty off-putting.

This year was no different in that the parade was a blast and this guy ended up stationing himself right next to us. Dang. 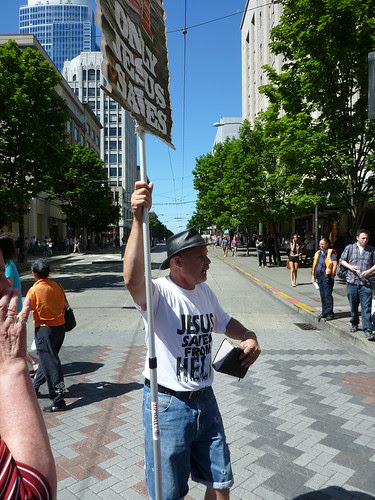 Jesus doesn't just save, he saves you from HELL people. 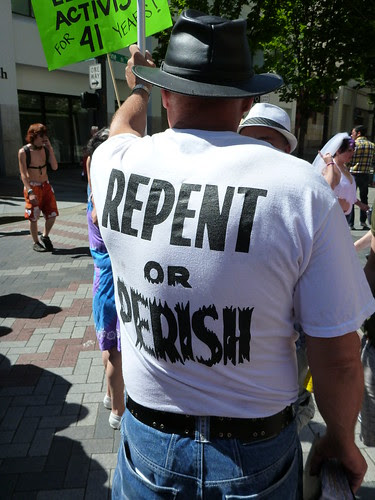 Love the font he used for PERISH. is that flames?

So this guy launches into his extremely well-rehearsed, extremely loud tirade and then 2013 turned out different than previous years.

I'm not sure when it happened but at one point this kid is standing right next to Jesus Saves and starts waving a rainbow flag next to his head incessantly. I mean he keeps this up for a LONG time and never says one word. After a while another kid shows up and starts beating these two inflatable batons together that one float was schwagging people with. The sound of the batons was shrill and deafening and it did an extremely effective job of drowning this guy out...!

Suddenly these two kids are joined by a small mob of people how had obviously had enough of Jesus Saves and what I saw next made me actually laugh out loud. 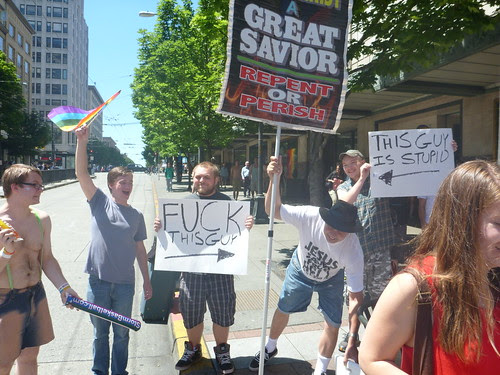 Note baton boy on the left and flag boy just next to him.

I love these kids.

With all due respect to my friends that do believe Jesus saves, you are my friends in part because you don't foist your views on me. At an event that is all about tolerance and acceptance, this guy deserved what he got.