one thing leads to another

A few days ago I was riding home and noticed that the rear wheel on my commuter bike was wobbling. I figured I had broken a spoke but when I got home and took a look the right flange on my hub had fatigued and a piece had sheered off causing me to lose TWO spokes. 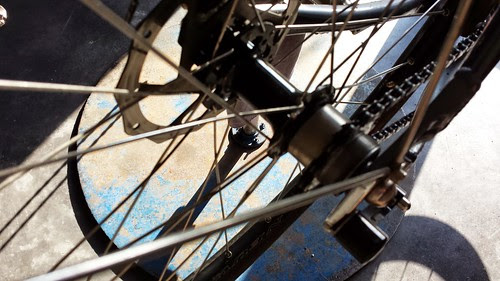 So I grabbed a wheel off of my mountain bike.

In the process I noticed that not only was my front tire pretty sketchy (several cuts has been patched with duct tape) but my rear tire was worn down to the threads in no less than FOUR places. Yikes. Guess I need to cool it on the skids.