Rosyln Ramble - North Bend to Rosyln and back on cyclocross bikes

A couple of weeks ago I got a Facebook invite from Ben Spencer to attend the Rosyln Ramble. I kept thinking there was some sort of mistake as people were talking about the 'RR' and I kept saying, "Hey, I'm done with road racing!" Hahaha... I'm an idiot.

It was awesome! And the group was so big! I reconnected with some old friends (Rick Heckenlaible, Peter Stocker, Ben Spencer) and met some new ones and spent 10 hours outside away from cars. Happy 4th of July indeed. 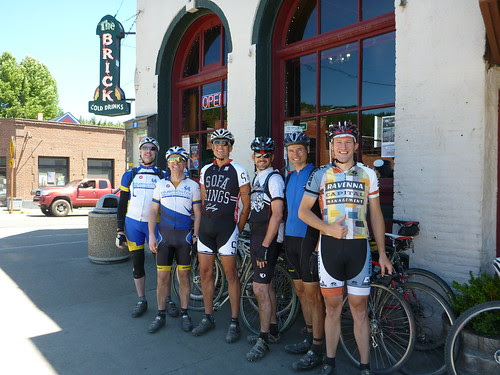 What is the Roslyn Ramble? It's a ride from North Bend to the Brick Tavern in Roslyn and back almost entirely on the John Wayne Pioneer Trail. It's the closest I have ever come to riding a Gravel Grinder.

We met at a park in North Bend just off of the Snoqualmie Valley Trail, compared equipment and with an awesome absence of pre-ride excuses (unlike what you hear at road races) took off.

We took the valley trail all the way up to Rattlesnake Lake, something that I have never done. Usually I just drive up the road and then start from the lake. The gradient was very mellow going this way, perhaps 1-1.5% and we were able to ride at about 14-15 mph. Up at the lake we hit the restroom, regrouped and then started on the John Wayne Trail proper. The grade here is a touch less but we still just rode at about 15-16 mph to keep the group together.

It was fantastic! I kept pulling my camera out of my jersey pocket to take pictures and shoot video. Like these here. 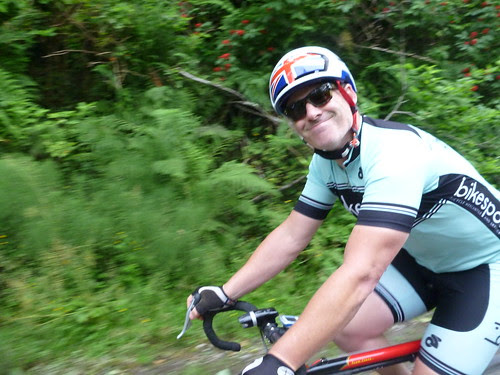 Going into the tunnel at the Snoqualmie Pass was the best, I didn't even get off and just flipped my light on and rode on in. I almost bit it because right inside the entrance is a pile of gravel that was deeper that I thought and I only had one hand on the bars... you can see the camera shake when I hit it.

Into the heart of darkness.

On the west side we had a bit of fog but as usual on the east it was glorious and sunny. We warmed up, topped off our bottles, used the awesome restroom facilities in the Hyak parking lot and carried on. Through more tunnels!

Just after shooting this particular video I had pinched my rear tube riding over a rock. It was a worst case scenario... my spare tube had a hole in it, the tube of glue in my first patch kit was totally evaporated (and the seal was unbroken!) but luckily I had another patch kit with peel-and-stick patches. Whew!

ASIDE - as I pulled my wheel out of my frame to fix the flat I heard someone say, "Don't worry about Martin, he'll just hammer back on." Nice. Thankfully two guys waited for me but I did have to go hard and just as thankfully everyone was waiting for us down the road a ways. Thanks guys.

In Rosalyn we all met up at the Brick. Hello burger, hello Bud Light, hello onion rings and hello heartburn. That's right, nothing quite like starting riding with that anchor in your stomach. Good times.

On the way home we took a detour right through the Suncadia resort and it was much nicer than the way we had come. I wonder if this development is making any money?

Then it was back on the gravel trail and into a headwind. Anyone that has driven west on I-90 knows what I mean. Slog, slog, slog... For some reason I kept ending up on the front and did a fair bit of pulling. I was actually in my drops most of the time! Doing 16 mph. :( That's what a headwind, a slight incline and a gravel surface will do.

But it was still beautiful. 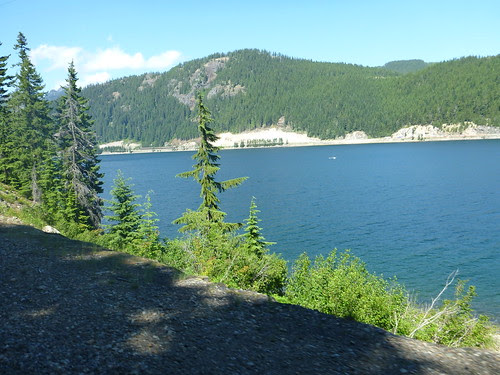 We stopped at Hyak to fill bottles and regroup and then it was through the tunnel again.

And... then the pace picked up.

I suppose it was inevitable. At first we were cruising along at 20 mph but that didn't last long and then it was 23-25 mph sustained. It felt fine for a bit but my legs were cooked and at one point - perhaps it was after trying to take yet another picture - there was a gap in front of me and it really hurt to close that down. Ouch. I think this video was the culprit as you can see people passing me.

No one is waiting around any more.

Zoom, zoom, zoom! If you were not feeling tip top you had to draft. We were flying. We stopped one last time at Rattlesnake Lake and then we descended the valley trail. This one guy could obviously smell the barn and bang! Suddenly we were riding at 27-28 mph. Ah the testosterone... And there was more to come. The last mile or so of trail is flat and two guys 'attacked' the bunch to finish a few yards ahead of us. Winner.

Wow, what a day! Turns out most of this ride is shaded so we did not get cooked by the sun. We did however get a fantastic dirt tan from all the dust. 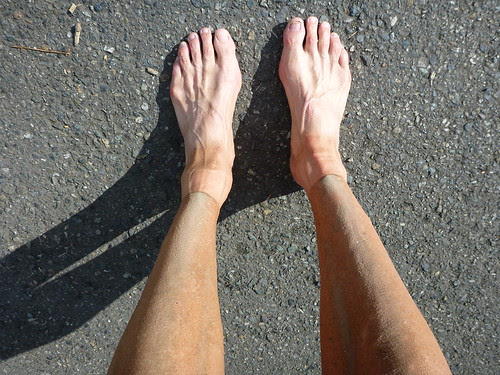 Our pace did burn off a couple of folks early on (which is hard not to do when the group is this big) and we separated a little on the way back as well but for the most part the bunch stuck together and we regrouped several times. My cyclocross bike was an excellent choice for today. Some slightly fatter, tubeless tires would have made it perfect (although one guy with tubeless tires flatted as well...). I started with about 48 psi in 35c tires and still pinched but otherwise that felt pretty good. With water at Hyak and the half way point you really only need to take two large bottles. Padded bar tape is nice or padded gloves. I didn't wear gloves but had to move my hands around the bars a lot to stay comfy.

If I get invited back next year I would love to do this again.

Email ThisBlogThis!Share to TwitterShare to FacebookShare to Pinterest
Labels: ride-cyclocross