Finally, my first run since Mt. Hood. I guess all that rest paid off! BIG TIME. The result? a PR for this loop; by over three minutes. And I finally went sub 1:20. Nice.

Then after our run I headed up the hill to join the Seattle Running Club for a trail work party. Talk about hard work! I am such a wimp when it comes to manual labor. 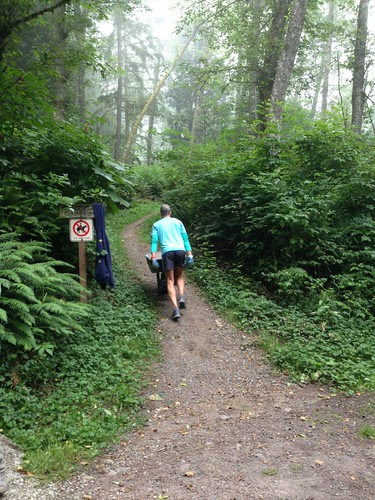 Then I went home and did yard work for two hours. My back is torched.

Edgardo Balansay and I went for one of our staple training loops on Cougar Mountain and I felt good right from the gun. I asked Edgardo if it was okay to push the pace and he said yes so off we went.

After the initial hill which we ran a little faster than usual I sped up and then held the pace there. I was hoping to ramp it up yet again after we passed 20-minute tree but I was only barely able to do it. I guess I was already going about as fast as I currently can...

At one point I asked Edgardo if this pace was okay and he said, "Yes, it's exciting!" Awesome attitude.

To top it off, we went this quick in spite of having to stop and pee and Edgardo fell down twice. That guy is a trooper, both times he popped right back up and we were on our way pronto.

I was also able to mostly drain my bottle at this pace so I guess I'm getting better at drinking while going fast. I wore two socks in an attempt to eliminate all friction on my foot. That didn't work so well. First of all it didn't really eliminate all that much and secondly it put a ton of pressure on my toes and I almost bruised two of them by the end of run. I won't do that again.

Trail work is hard. Especially when you are soft like me. We were tasked with moving a giant pile of gravel about .25 miles up the trail. Having run this section of trail just one hour ago when it felt like the duck pond was 'just around the corner' I can tell you that when you are toting a wheelbarrow full of gravel it is not. Did I mention that we had to go up a hill? The first time we all had loads that were WAY too ambitious and two of us ground to a halt and needed help.

This one guy was a freaking machine. He was much faster than the rest of us going up and would run (not jog) his wheelbarrow back to get another load. Repeat. He lapped me twice and I was the second fastest guy there. Awesome.

Here are all the trail work party pictures.