RAMROD (Ride Around Mount Rainier in One Day)

Not even sure how to start this post, perhaps at the end since that is a dramatic picture. 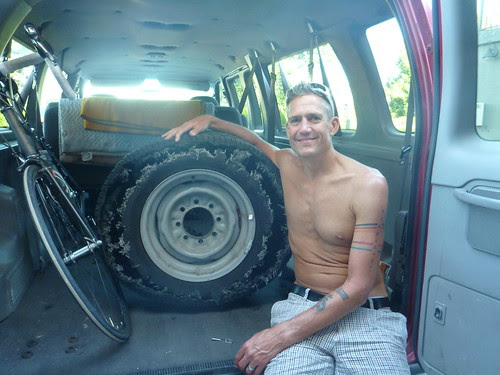 Today was the 30th edition of RAMROD and I am so grateful to have been able to participate in this event for as many years as I have. I started doing it in the late 80s and even when I stopped racing the first time I kept right on doing it. After having stopped racing bicycles this second time I have tried to keep on doing it but today proved to me that I need to adjust my standards as keeping up with racers is hard. That's an understatement by the way.

I won't waste any time and will give a HUGE shout out to my friend Jeff Reed straight away. Today he was my freaking guardian angle. More about that in a bit.

I left home pretty early in hopes of loitering at the start and hooking up with a good group of riders. Experience has taught me that the fast groups usually depart around 6:00 AM so I wanted to be ready to roll around 5:45 in order to have my pick of the packs. As I'm driving south on I-5, not 15 minutes from my house - the rear tire on my van blows up. Seeing as I was traveling at roughly 70 mph and seeing as it took me a minute to pull over, by the time I came to a halt the tire looked like the picture above. Yikes.

Had I ever change the tire on my van before? Of course not. Time to learn. In the dark. On the shoulder of I-5 with cars and trucks whizzing past. Sheesh. Thank goodness there were instructions because the super secret latch you need to open in order to thread the jack handle in and lower the spare is not easy to find.

ASIDE - this task took about 45 minutes! I also skinned my left palm and one finger on my left hand when the lugnut wrench slipped as I was trying to remove the destroyed tire. I came this close to just giving up and thought about driving home or calling a tow truck but in the end stuck it out. Whew.

With my spare installed I started driving and tried to stay calm telling myself that if I was going to ride alone it would be okay. By some miracle I pulled into the event parking lot at about 6:05. I guess leaving early has some value.

I ran to get my number and who should I see waiting at the start...?! Jeff, Sean Phillips and a bunch of other racers. "Hey guys, can you please wait 10 minuets while I change my clothes and pin my number?" No problem Martin. I have NO doubt in my mind that I was starting with the fastest group of riders on this course today. 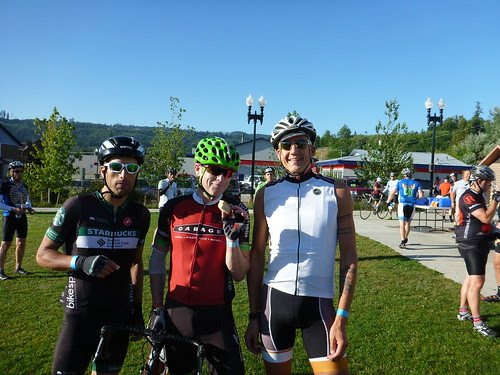 [Note non-racer in generic, mismatched kit on the left...]

Before we started I was informed that only triathletes and runners don't wear gloves when they ride. As if I needed further proof that I was not a bike racer any more.

Right from the gun we are doing 27 mph. And if you look at my GPS data blow you will see that we basically averaged 27 mph for the first HOUR AND TEN MINUTES. You might also note that my power output was the highest during this period. Not a good sign if you are trying to pace yourself. At several points during this tear down to the mountain I had some serious doubts about finishing.

I was last to pull into the first food stop on account of it's on top of a small hill. I was first to pull into the second food stop on account of this guy getting a flat about five miles out and I just kept going nice and slow to hopefully keep myself from blowing sky high once we hit the climb to Paradise. Here is the crew heading into the first aid station just before the hill.

After entering the park it was all over. Sean went to the front and three or four guys tried to hang. I did too and lasted perhaps two miles - we hadn't even gotten to the steep part yet when I pulled the rip cord.

When we did start climbing in earnest who did I find by my side? It was none other than Jeff. He said something to the effect of, "Why pay $100 to ride alone? I prefer company." Me too Jeff, me too. THANK YOU FOR THE COMPANY.

Three of us rode up to the top and then down to the Box Canyon food stop. Two words: chocolate croissants. 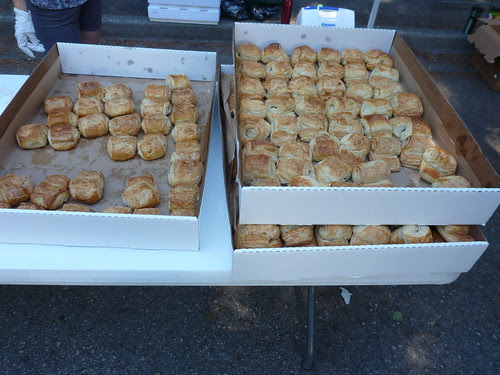 Actually that would be four words as I had two of them. I can't help it. And, I disserve it. :)

Three more miles of climbing, another huge descent and then it's up Cayuse Pass. By now it was Jeff, myself and Frank Colich. Frank is 6' 5" and about 192 lb. I know because as the two larger guys in the bunch we were comparing heights and weights. Jeff found his own rhythm on this climb and eased up the road but Frank stayed by my side and was content to ride my speed. Amazingly I felt a tiny bit better here than going up Paradise... I was VERY thankful for that. As it was, I still had to stop once to stretch my legs and pulled over again at the water stop. But from there I was able to ride up to the top.

About half a mile from the summit who should we see but Jeff! Here he was riding back down the hill just to pick us up! Awesome. We got to the top, had a a quick stretch and then dropped down the deli stop. 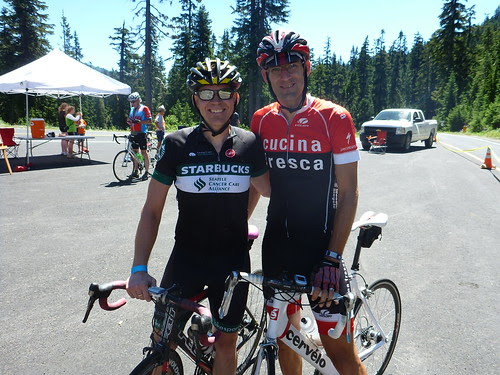 Where Sean and company had been waiting - for at least 30 minutes I'm guessing. But hey, they waited! Very nice of them. They even let me have a relaxing sandwich and spend a few minutes in a chair.

Pulling out of the deli stop I was psyched! We had a fantastic group and I can't think of many things that are worse than getting stranded in this last section of the ride all by yourself when you are beat down and it's hot and the usual headwind is blasting you right in the face.

As we zoomed along we passed loads of individuals and groups. After a couple of miles one of these groups ended up latching on and then one of the members of this other group infiltrated ours and got in front of me. Not 60 seconds later his rear tire EXPLODED. He didn't just get a flat, it looked like his rear wheel disintegrated.

With intense interest I watched as his inner tube leapt out of the right side of his tire and dropped down onto his cassette where it proceeded to wrap itself around all the cogs causing his wheel to lock up. To his credit this guy kept his bike upright as he fishtailed down Hwy 410. I was grabbing handfuls of brakes slowing down as fast as I could (diving left was not an option as I had not checked to see if there was traffic in the road and to my right was a dirt ditch) but the rider behind me didn't do such a good job. As he plowed into me I had slowed down just enough and had so much weight on my front wheel that his impact tipped me over and I did a summersault onto the ground.

Put it was a perfect tuck & role! I ended up lying on my back still clipped in with both hands on the bars totally unscathed. As I extricated myself I asked this other guy who had slammed into me and also gone down if he was okay. It took him a bit to come down from the high of the crash but eventually he said he was okay so I popped up, swung my leg over my saddle and took off.

Turns out the nose of my saddle had gotten pushed over to the left. WAY over. I tried to straighten it with my hands but no dice. By the time I got my multi-tool out, fixed the orientation of my saddle and was pedaling again my dream group was practically out of sigh. Shit.

Not willing to accept defeat I started to pedal really hard hoping they would figure out that I was not with them and slow enough for me to catch back on. A mile or two later they really were out of sight and I had throttled back my effort to something I hoped I could maintain to the finish. Massive bummer.

For a while I looked ahead and behind for other riders but never saw anyone. Times like these are made for music by alas my iPod was safely at home. Here I was, in that worst case scenario I have always dreaded.

Just as I started to perform some mental math to see when I might finish this slog something started to materialize out of the heat haze in the distance. It was riding in the opposite direction. And it was black and green...! It was Jeff! No way. Jeff turned around, caught me, got in front of me, said, "Go ahead and rest up." and then proceeded to pull me at 24 mph into the headwind. Mile after mile after mile. What the heck did I do to deserve this? Amazing.

SIX MILES LATER Jeff finally swings off and says something about taking a short break. I think I pulled for one mile and then Jeff was back at it. I squirted some water on his back once but that was about all I was able to contribute on this day.

I know this course pretty much by heart and just as we were getting ready to hit the last shallow climb before turning off to Mud Mountain we saw Sean and the rest of our group in the shoulder fixing a flat. Can you believe it? 1) I didn't hurt myself in the crash, 2) Jeff came back for me, 3) Jeff pulled so fast that we didn't lose much time and 4) these guys had a mechanical which allowed us to finally hook back up. What are the odds?

Just as we got rolling the guy that had the flat got another! This time I helped fix it and because of the rest I got actually felt okay from here to the finish. How do you spell relief? Jeff Reed; my hero. 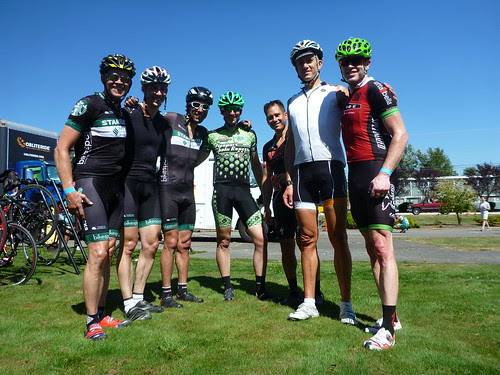 And what better way to top off a day that included two chocolate croissants than with an ice cream sandwich. 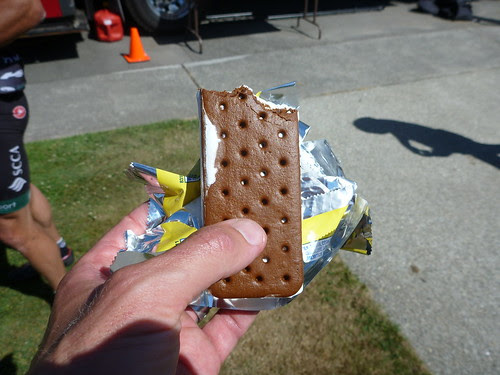 I learned a few things today.