Today was all on the Pacific Crest Trail and every time I am on this trail I am amazed at how pretty it is. No wonder so many people hike significant sections (or even all of it!). Case in point, we saw more than a handful of hikers today and at least three of them were going all the way. Nuts. Just like yesterday we were covering a section of the Cascade Crest 100 course to familiarize ourselves with the terrain.

We started at Tacoma Pass and crossed Stampede Pass along the way and finished up by running around the back/west side of all the ski areas up at Snoqualmie Pass and then finally right across one of the ski slopes at Summit West on our way back to Alpental and Guye cabin. No wonder I used to fall down so much while trail running, I can't stop looking around. 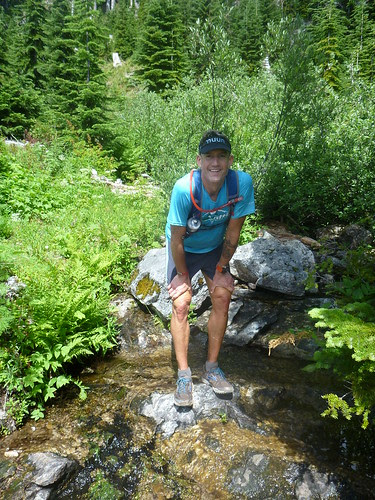 The drive from the summit to Tacoma Pass takes one hour! It's mostly on dirt roads so you have to go pretty slow.

Today we had to pack more than yesterday as the distance was much longer. We did get treated to TWO aid stations [Thanks Arthur Martineau and your friends that volunteered!] so nothing extreme but it was still a good opportunity for me to test drive my new UltrAspire Alpha race vest in order to see if would work at Cascade Crest 100. This whole weekend was basically a shakedown of equipment and shoes/socks for me. Withy three weeks to go there isn't time to change that much and I was mostly hoping to confirm some suspicions.

The group today was BIG. 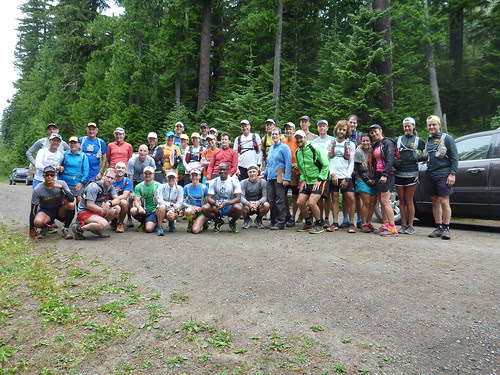 Arthur had arranged the aid stations at 10 and 20 miles and each time they were at locations where the PCT crossed a dirt road so people had the option of running 10 miles, 20 miles or the whole thing. Very cool.

The entire day was spent at that altitude where trees are shorter yet it's still pretty green. WE crossed a couple of scree slopes early on but today was almost totally runnable. 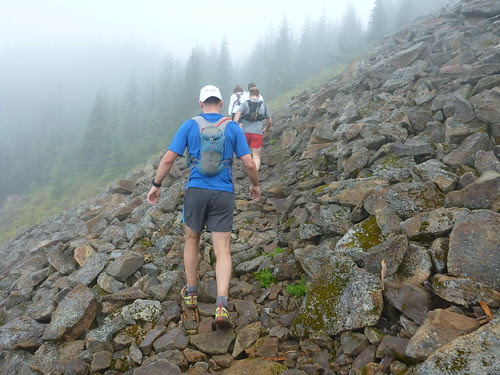 There were a couple of streams and I used each opportunity to wash my face, hands and dump some water on my head. That felt incredibly good.

After a few miles when the group got sorted out I ended up with Kevin Smythe and we ran the entire rest of the course together. That was really nice as I am a fan of company. Another bonus was having someone along who could take pictures of me for a change. 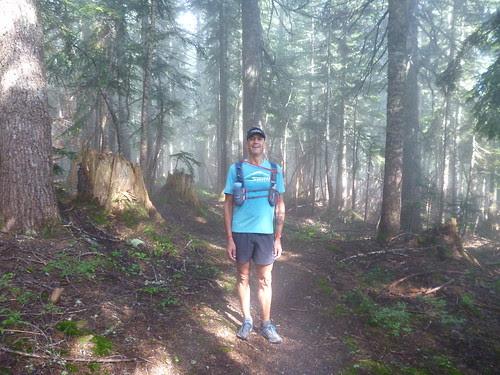 Not only pictures, he even got me on video which was fun.

I did get pretty tired by the end of today but we never pushed the pace needlessly and kept it in cruise control so the crisis was all in my head. I did walk more sections toward the end but it was still enjoyable. And we saw a patch of snow! In August!

In the last five miles the trees got bigger and the trail got damper and there were TONS of inch worms hanging from branches all over the place. It was sort of like a bunch of hanging ornaments decorating the trail.

At the very end we popped out over a saddle and were running right across the ski slope at Summit West. 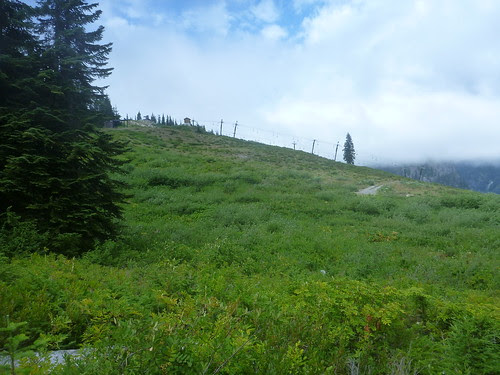 That was kind of a trip. It was also remarkably ugly compared to what we had spent all day on. At least it was 1) super close to the finish and 2) downhill from here.

As we descended the ski slope we passed a couple with two small children. One was in a rickshaw of sorts with Dad at one end holding onto the two poles and Mom in back holding onto a handle like you would find on a stroller. The trail was not as wide as this contraption, the kid inside was crying, it was hot; they were not having a good day. As we passed I said something like, "That's impressive...!" The father just gave me a withering look.

I continue to love the Injinji toe socks! Six hours and no blisters. My Brooks Cascadia 8 shoes worked pretty well too, this is a totally viable option come race day.

It turns out this vest I wore is not ideal for me. When I put a large, full bottle in the front, it flops around just enough to jam me in the ribs more than I would like. I almost got a bruise. I think the main issue is the two straps that go across the chest keep loosening up and the elastic material the straps are made of is too stretchy/weak. If I could snug them down and have them stay that way it would help. That's too bad as almost everything about this vest is perfect. On the upside, a smaller bottler does not bang around nearly as much, it's just this big one.