Today will be my fourth consecutive day of trail running! Not only that, it will conclude my highest mileage block of running ever. When you start this sport late in life like me, firsts are easier to come by. :)

Once again we were covering a section of the Cascade Crest 100 route and I for one am glad I have seen this section prior to race day. It's an ass kicker in numerous ways. We ran (read: walked) the 'trail from hell' along Kachess Lake, climbed a long gravel road section and then summited all the 'needles' culminating in climb up to the Thorpe Mt. fire lookout. Massive. And all this starts at about 70 miles in. Ouch.

No fancy aid stations today, just a spring at the half way point. 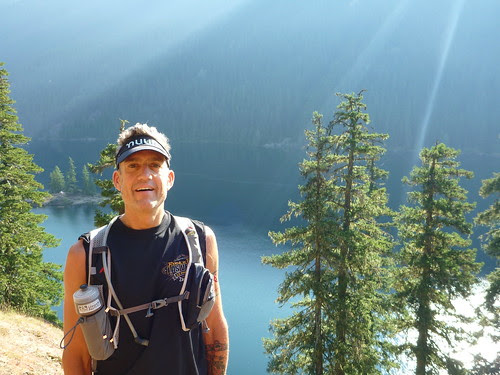 The group today was significantly smaller than yesterday. Today was going to be harder, would take longer and there were no shortcuts available so if you started, you had to finish. I was pretty motivated to run my first back-to-back 50 km days and the scenery sounded beautiful so hopefully if I kept the pace mellow I could enjoy it. 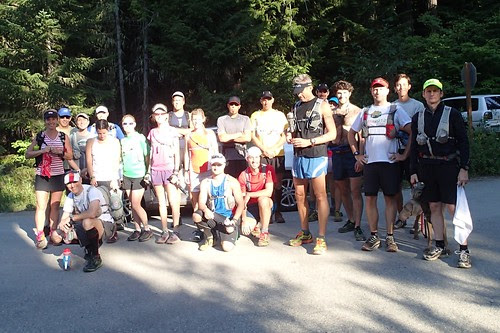 Arthur Martineau was doing some sort of heat training and started out in a long sleeve black shirt(!). And as soon as we hit the dirt he also took off! One minute he was within sight and then I see him literally bounding up the trail and he's gone. Damn.

We started out running through a campsite and I decided I needed to take a toilet break while I still had access these deluxe facilities so when I ran out of there I was in last place. As we worked out way along the lake on the 'trail from hell' (which really is pretty technical with lots of ups and downs that you need to walk) I passed a few people.

At one point along Kachess Lake I was in a group of perhaps four when suddenly the front runner starts yelling, "Ouch, ouch...!" We were running through a swarm of angry yellow jackets! This guy in front stops to scratch his leg or whatever and I'm like, "GO! Don't stop please." I got stung once on my left leg which wasn't fun but another guy got stung four times. :( At least they didn't pursue us and once we were out of the immediate area the stinging stopped. Whew. I'm sure hoping that nest is gone come race day as we'll be here in the night.

After that excitement I left the group I was with behind and was running solo. Like an idiot I had left the directions back in the lodge thinking I would be with someone that knew where to go... Yep, there's a lesson buried in there somewhere.

Long story short I got lost. Luckily I connected with Ben who had taken the same wrong turn as me. After dorking around waiting for others to show up and finally realizing we had gone astray we doubled back and luckily bumped into a hiker that told us where we should have turned. Our detour amounted to almost three miles so it could have been worse for sure. Plus Ben was great company and we ran together all the way up the dirt road climb.

Making light of our mistake.

On the dirt road we finally caught some people which boosted my morale. It felt good knowing we were going the right way! By the top of the road climb I Had left Ben behind and except for when I caught other runners I was solo from here to the finish.

Next up, the 'needles' which are aptly named as each of these small climbs is freaking steep. I had to shift down from my usual hiking speed and grab a lower gear. Usually when I hike I try to save my calves and keep my foot flat on the trail. That was not possible here and I had to walk on the balls of my feet because of the gradient.

Thanks goodness I had been staying on top of nutrition and hydration so in spite of the effort I was still feeling okay and within myself. I kept reminding myself that the goal was to have fun and if you edit out the labored breathing from this soundtrack I was having a really good time.

Somewhere in here was the spring. 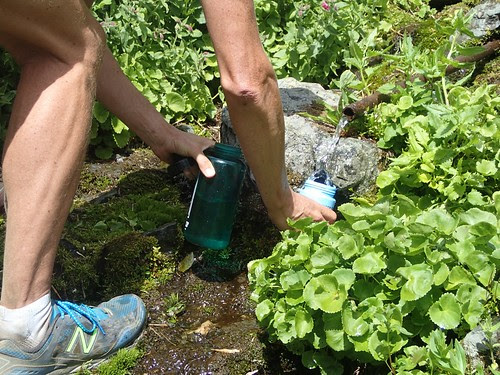 What a godsend! It was quite literally a rusty pipe sticking out of the hillside about 10' above the trail but water never tasted so good. To my surprise (and relief!) I discovered I had almost completely drained the 2 liter bladder in my vest so I filled that up to the top. I also drank a ton with my hands and dumped several handfuls of water over my head after washing my hands and face. Luxury!

Next up, Thorpe Mountain.

This last climb was an out-and-back which I hear is the same thing we will do come race day. It's quite steep but I managed to pull out my camera and grab a shot of the last switchbacks and even got someone to take my picture for a change. 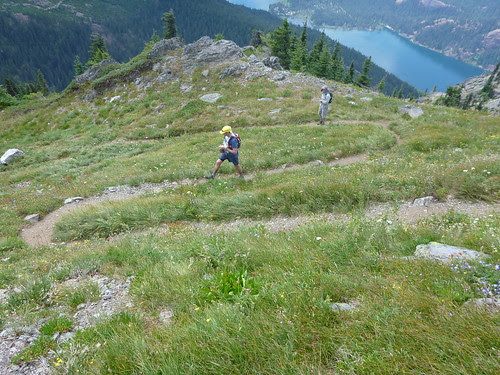 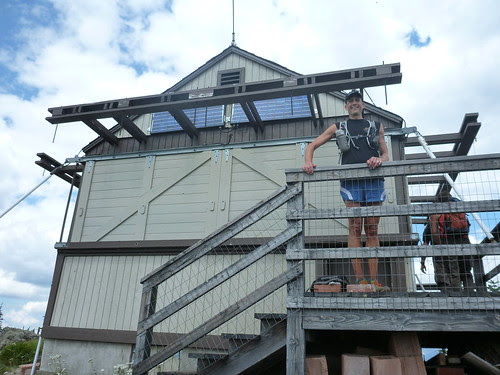 At the spring I had passed a group of perhaps four and on the way up to and down from the lookout I passed about four more but I never found anyone to run with so as I took off down the big descent I was still solo.

I had heard this was a long downhill and the trail did not disappoint. At the top it was somewhat arid with just small trees and had it not been for Arthur's arrows I would have missed some turns [Thanks Arthur!] but as it was I was able to bank around corners and enjoy myself. After a couple of miles you dropped into these amazing series of alpine meadows that were so fun to run through.

Toward the bottom of the descent the trail got steeper again and although I was not bombing anything I was moving pretty good and was once more SO thankful I had not gone any faster earlier and that my quads still had some life left in them. The trail kept crossing little streams and I think I stopped at each one and washed not only my hands and face and dumped water on my head but I also started washing my legs as the cold water felt pretty freaking awesome on my quads.

With about one mile of descending to go I suddenly caught three of the front runners who were walking the descent! We exchanged greetings as I bounded by and I again gave myself a little pat on the back for getting the pacing right. Nothing against these guys, I was just thrilled I was not hating life!

At the bottom the trail turns into a totally washboardy jeep road which eventually turns into a wide dirt road which eventually dumps you out on pavement and then you run it in parallel to I-90. In total this flat section was about four miles max which is not long but even so it was tough for me. I think flat running - especially late in a race - is the hardest thing for me. Not that I excel at climbing or descending but when I'm going up or down it feels like I don't have to push myself so much and I just go whatever speed I can. On the flats you have to push yourself. That takes an inner drive which I feel other people definitely have more of than I do.

I had to walk a few (four?) times for a handful of seconds each time but I made it. I had to walk not because my legs were toast (although they were VERY tired), it was just because my mind was kind of fried and the will to urge my body on was pretty much gone. Fine, I saw the café where we dropped off the cars at the start.

Hot, dry, asphalt. Not as fun as the woods.

What an amazing day! It really had it all with stream and river crossings, phenomenal views, great trails, long climbs and really fun descents. And this was my longest run with no support and my fist time getting lost on anything longer than a 10-mile outing; the fact that I took it in stride and still enjoyed myself is a good sign in my book. I also got to chat at length with Dave and Ben who are both hilarious and a pleasure to run with; thanks guys!

Here are some things I learned today.