Well, who would have thought it? Here it is June and here I am again with my good friend Tom riding my bike a long way but not getting anywhere.

For the fourth year in a row Tom Wick and I are knocking out the Fat Cyclist 100 Miles of Nowhere and I must say that early on in the ride I was thinking this might be the last time… To try and stimulate ourselves we again chose the Marymoor Velodrome for our effort as trainers/rollers was a bit extreme and mind numbing. Not to mention crotch numbing. 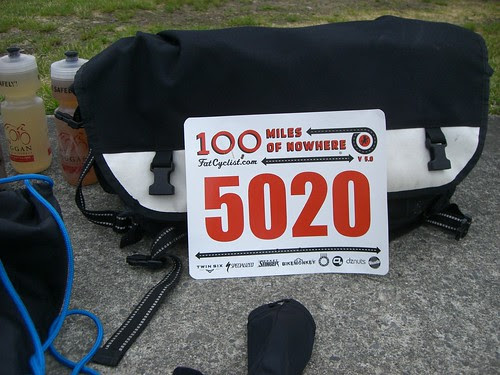 This ride is technically a fund raiser for whatever charity selects but to be honest I just pay the minimum to enter and do it for the challenge. Still, I figure most any reason is a good one to push yourself.

There was a class scheduled on the track at noon so the plan was to get started early and unlike last year when I read the instructions wrong and showed up about 30 minutes late this time I got there on time and was able to roll out with Tom and Jerry Shafer. Whew. Nothing I hate more than starting a 100 mile ride 10 miles behind. 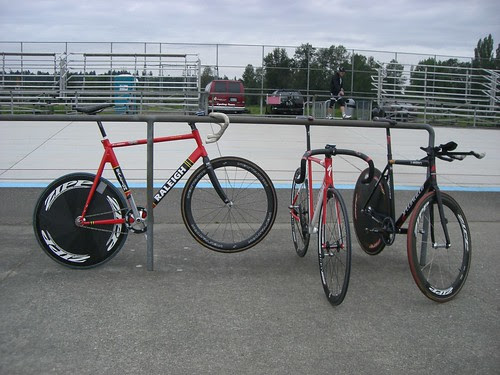 Right away we got down to business and our speed was averaging about 25 mph! Mostly thanks to Tom (who was the strongest this day for sure). Interestingly I think I felt worse about this ride in the first half than in the second half. Perhaps it was out pace? Perhaps it was just knowing how much was left? Whatever, it was definitely the case that as my body wore down my mind perked up.

We were absolutely tearing up the track!

Unfortunately after about 20 mils Jerry got a bad headache and had to pull off. He managed to do several laps solo after that and we would lap him every six or seven laps but he eventually  had to pull out. Too bad, that must have been quite the debilitating headache. :(

The next 30 miles were a bit of a grind for me. With just the two of us I was not getting as much rest as I wanted. My mind kept going back to last year when Bilko got out the scooter and motor paced us at 30 mph for AGES. That was a freaking dream. Not this year.

Based on my experience and on the fact that my track bike has a more aggressive riding position than my road bike and on the fact that my back is 'busted' (herniated disc) I knew I would be needed several breaks throughout this effort. Somehow I stuck it out until almost 50 miles and then said something (it probably sounded kind of whiny) to Tom about needing to stop. He convinced me to go to 60 miles as that would mean we had a lot less left to go for the second half. I agreed and did not bother to stress the fact that I would need to get off my bike much more than once during this suffer fest.

Somewhere around mile 35 or 40 people had started to trickle into the track for their usual Sunday morning workout. By the time we hit 50 miles there was a nice, big paceline and although it was not going very fast (yet!) we latched on to the back for a bit of a breather.

Man did that feel nice!

Up to this point Tom had been taking four-lap pulls and I had been taking three-lap pulls and to not have to pull at all was incredible. And, the pace slowly increased so by the time we got to the front (there were about 20 riders in the paceline) we were flying. And then we only had to pull one lap each! Nice.

That took us to 60 miles and then we got off the bike for a bite, a drink and a stretch.

After we got rolling again we jumped into another smaller paceline and suddenly my left lag started to cramp. Yikes! This was way too soon for me to have problems and as I pulled up and let Tom ride ahead while I rubbed out my quad I was seriously worried this was going to be an issue. I rubbed, I drank and by the time Tom came back around lapping me I was able to jump back in. And the leg felt fine. Yes! But then just as quickly as this paceline started it fizzled out. Rats.

So from about 70 ish miles in to the end we were on our own again. But I was feeling better! I started pulling more and in spite of my legs feeling pretty toasted my mind was finally in the game.

ASIDE - Tom and I took different approaches to this ride. He had his cyclometer set to a screen that was displaying distance and I took the opposite tact and was only displaying my heart rate. I find that if I look at distance it CRAWLS and so I was trying to trick my tiny brain into zoning out for extended stretches and then 'surprising' it with how much we had ridden. It kinda worked.

But my back was screaming at me… A little later I told Tom I just had to take a break and sit up again. He replied, "Okay…" and then proceeded to keep right on riding. Damn! I clung to his wheel and after a lap or two he turned around and informed me that we had just SIX LAPS LEFT. Thank you Jesus. That was the nicest of the 'surprises' I got all day.

We both pulled the plug just as soon as our odometer read 100 and immediate hit the warm-up circle and then the infield. I was thinking I would have to do an extra lap as Tom lapped me once but then I remembered the first time we had stopped for a break and I had done a couple of laps of the warm-up circle before pulling in so luckily I was able to stop at the same time. Another nice surprise!

Here we are looking oh so attractive after finishing up. 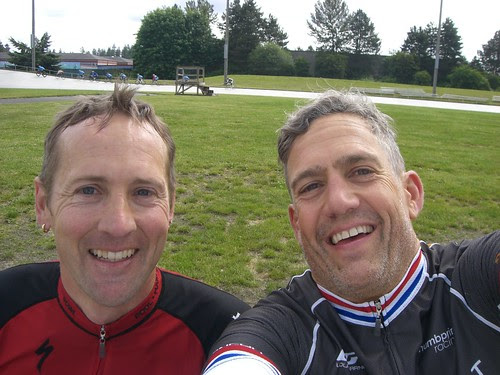 Would I do this again? If it's just Tom and me I'm thinking not. I'm not the kind of guy that can just keep on doing the same event year after year just because, I need change and a new challenge. But we'll see, the body forgets pain very quickly. Too quickly sometimes. :)

Thanks Tom for being there! And thanks Jerry for showing up. I'm bummed you had to quit.

Email ThisBlogThis!Share to TwitterShare to FacebookShare to Pinterest
Labels: ride-track