The Longbranch Road Race is a classic. It's hard without being ridiculous and if you can get into a break the hills are a bit easier than when you are in the pack. The only problem is that at the Masters Championship race there are no pretenders in attendance and getting into the break is more difficult than usual.

I was here with Ryan Dean and Greg Kauper for the 40-49 Category 1-3 race, it's been pretty much the three of us all year long so I figured the team was in good hands. 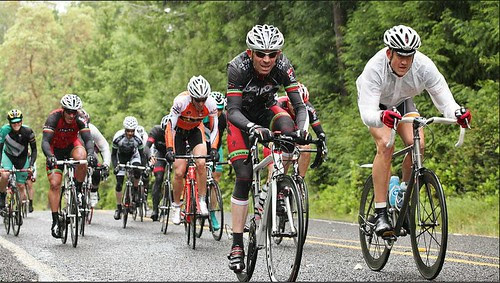 As we drove south the rain started and by the time we got to the race it was freaking dumping. I had checked the forecast and knew this is what we were in for but it's still tough to wrap my head around racing in the rain from the start to the finish. AT least it was not cold! In fact, I could have swapped my rain jacket for a vest and been fine.

With the wet I only got in a meager warm up… complete with seatpost fender. In retrospect this was not ideal but I just did not have the Eye Of The Tiger today.

Right from the gun a Fanatik Bike Co. Racing Team rider takes off up the hill and I figured it would be a good warm up to chase him so I did. We caught him and there were a few more surges but nothing significant.

We went up the first hill pretty hard! For me anyway… it was my max heart rate for the race. I was in that place where I knew I would have felt a little better if I had warmed up more but I also knew that this pace was beyond my fitness in general so it did not really matter that my warm up had not been ideal. :(

On the first hill we also had our first of three(!) crashes. Someone was not paying attention and ran into a rear wheel while climbing and about three riders were down. I happened right in front of and I had to slow down but did not need to unclip. Accelerating from that was not fun.

Lap #1 and #2 were fast. Someone would push it over each summit and there were loads of attacks on the flatter sections. Greg and Ryan were both getting in a bunch of moves but nothing was sticking. I was able to stay in the front half of the pack but that was about it. On every hard hill I would try to start the climb at the front, fade back during the ascent but not get dropped by the top. So far it was working.

As we finished lap #2 Jason Bethel (Garage Racing) was just up the road with one other rider. I'm not exactly sure about the order of events but it went something like this. Greg was struggling just behind them. As we started up the hill just past the start/finish line Todd Herriott (Herriott Sports Performance) took off in pursuit. Ryan and one other guy went after him. I knew Todd was going to blow past Greg so I put my head down and tried to bridge.

Surprisingly I got away from the pack pretty clean and I was not blowing up but Todd is just much faster than I am. I caught and passed Greg and was making progress toward Ryan and the guy he was with but Todd went right past them and managed to hook up with Jason.

I finally caught the Ryan group but was pretty winded by that point. I put in one meager pull and by this time these guys were only pulling at about 80% so shortly thereafter we got caught. At least Greg was in this group. I could see the gap to the leaders slowly growing…

The pace calmed down some for lap #3. I guess no one felt capable of making the bridge and two strong teams were already represented. By now my goal was just to finish. I know, kind of defeatist. :( The hills on lap #3 were not excruciating but I could feel that my legs were not going to be able to do this much longer.

A mile or two after crossing the finish line on our last lap there was another crash. Also right in front of me! Another three guys went down and Ryan almost piled into them. Thank good ness we all got through that clean and the pack waited for Ryan and I to catch up.

As we rounded the first corner Greg went in a little hot and slid out for the third crash in our race. The only consolation was that he fell without taking anyone else out. He tried to get back up and finish but his bike was worse for wear so he had to roll back to the start and DNF.

I got right up to the front of the pack for our last time up the hard hill on lap #4 but it did not help. As we approached the top I looked back and saw I was the last rider in the bunch! Shit. And then someone twisted the throttle just a little and there was a 10' gap in front of me. Across the false flat I still thought I might be able to close it but the speed of the bunch did not let up and then the gap started to grow. My race was over.

I glanced back and saw a couple of riders so just slotted into a tempo that I could maintain to the finish. One of the guys (and HSP rider) caught me and we finished up more or less together. Looking at the results we lost quite a few folks out there and it also appears that this HSP rider was not in my field.

Looking back at my 'training' for the last month I should not be so surprised by my result or lack thereof. For quite some time now I have been doing zero intensity (read: short, fast races or efforts) and have just been doing endurance workouts and long mountain bike races where I have to pace myself for the duration. It's okay, I am really enjoying riding in the dirt and had a fairly good early season on the road; as a team we had pretty good early season on the road considering our size and our competition. So it's all good.

Today was a hard day. At least one person agreed with me; as we were approaching the hard hill for the last time they said, "So much for the easy Master's race…"

Congratulations to Dave Hecht who won the 50+ race! And to Jeff Reed for continuing to edge close to that breakout performance. And to Garage for adding two victories/yet another day to what has been nothing short of a phenomenal season for them.